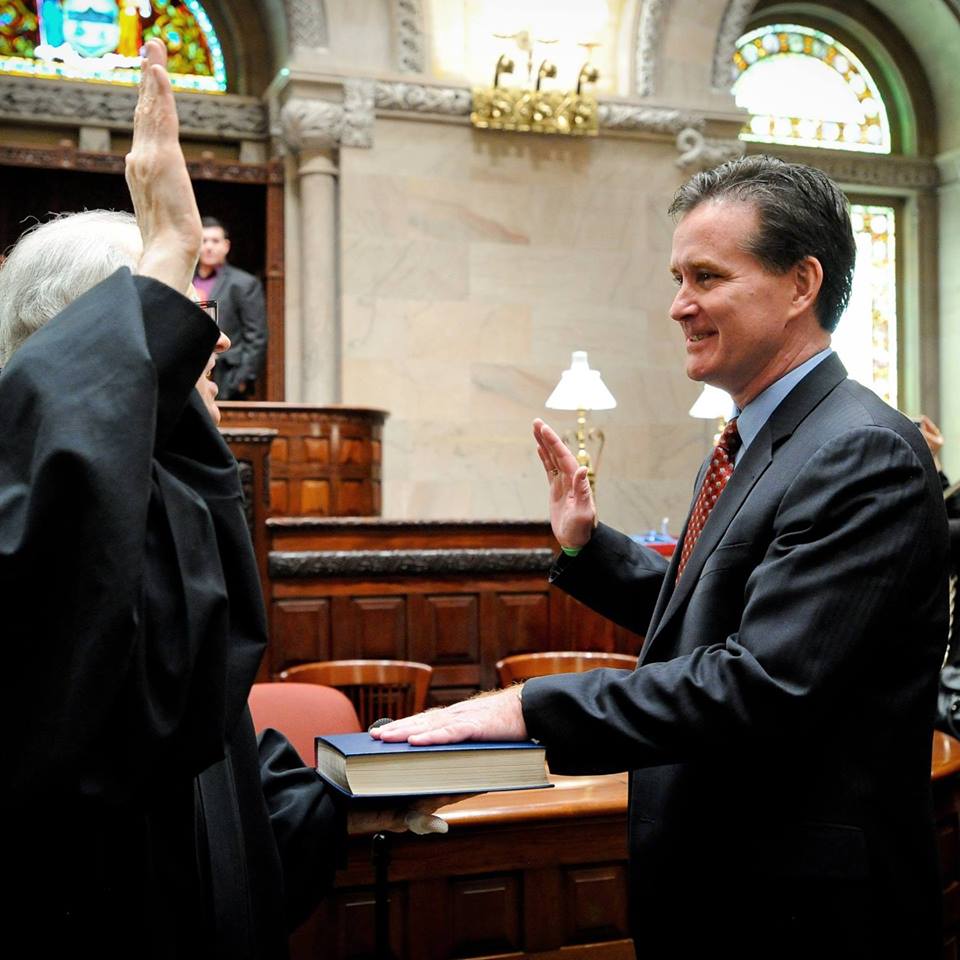 ALBANY - Republican John Flanagan assumed the mantle of Senate Majority Leader on Monday during an unprecedented time of upheaval in Albany, brought on by the arrests of both former Assembly Speaker Sheldon Silver and former Senate Majority Leader Dean Skelos on multiple federal corruption charges. Scandal unearthed by U.S. Attorney Preet Bharara has exposed the backroom dealings of the state's largest political donor and the men who control the flow of legislation. As he takes a new seat at the negotiating table, Flanagan faces a variety of challenges, including establishing himself as free of ethical baggage and coalescing a fractured Republican party.

While he'll have to prove his trustworthiness to his colleagues and the public at a time filled with ever-increasing cynicism about government, one challenge Flanagan will not have to face is convincing many of the rank-and-file senators he now leads to oppose policies favored by progressive New York City Mayor Bill de Blasio. As legislative session begins its final six weeks with another major leadership shake-up, de Blasio and many others from the city are looking to Albany with nervous anticipation as key policies hang in the balance.

Just moments after being congratulated on the floor of the Senate, Flanagan spoke to reporters and acknowledged the "boatload" of issues facing New York City and said that de Blasio should be reaching out to legislators and the governor to move some of the issues forward.

Earlier on Monday, before it was clear that Flanagan would be the next Senate Leader, de Blasio was asked about the power shift in Albany at an unrelated press conference. The mayor called the situation in Albany "unstable" and uneasily said, "Right now, we're focused on getting what we can get done over the next six-seven weeks in Albany for the people in New York City."

With only 17 session days left on the calendar, de Blasio is still waiting for Albany to negotiate deals on renewing sunsetting rent laws, the 421-A tax break for developers, and mayoral control of city schools. De Blasio and his allies in the City Council are also aligned with state Democrats in pushing for an increase in the minimum wage and paid family leave. It seems unlikely that Flanagan's ascent will change the Republican Majority's stance against a minimum wage increase and other changes favored by city leaders.

In fact, as he seeks to establish himself as the lone Republican of the "three men in a room," Flanagan may drive an even harder bargain than Skelos might have.

Many observers say they see Flanagan as a 'continuation of the status quo.' The 53-year-old senator has served in state government for more than half his life, is a white male Long Island Republican, worked at a lawfirm up until last week, is a member of conservative think thank ALEC, voted against marriage equality, and has already clashed with de Blasio, Senate Republicans' favorite foil.

While some of the profile fits, Republican insiders say that Flanagan's political history belies his biggest strength - his ambition. And it is that ambition that could see Flanagan become even more of a thorn in the side of de Blasio and an opponent of his agenda than even his predecessor, Skelos, who carried a major grudge after the mayor's 2014 attempt to win the Senate for Democrats.

After a fast leadership battle that some legislators say has been fracturing for the beleaguered Republican Majority, some legislators and activists say they expect de Blasio could serve as a uniter for Flanagan and the conference.

Flanagan is likely to make all effort to show strong leadership immediately. While other members of the Senate Majority have been content to serve as seat holders far into old age to keep the conference relevant, Flanagan has loftier goals. The new Senate Leader sees himself as a viable statewide candidate, and although he passed up the opportunity to run on the Republican ticket for Attorney General last year, he still harbors ambition to be Governor.

Not unlike the current governor, Democrat Andrew Cuomo - whom Flanagan will now be working with much more closely, the new Senate Leader has already tweaked Mayor de Blasio on education issues. Earlier this year, in an interview on The Capitol Pressroom, Flanagan, then chair of the education committee, said that mayoral control of schools might not be renewed and certainly would not be renewed as is. On renewal, Flanagan said: "I believe we have a very sincere and open opportunity to do so. Can I guarantee that? No."

Flanagan complained that de Blasio hadn't been particularly communicative with his conference and that he was trying to schedule hearings on mayoral control with de Blasio and City Schools Chancellor Carmen Farina.

In that same interview Flanagan chided de Blasio for failing to "properly listen" to Republican legislators from the city and for trying to win the Senate majority for Democrats.

"I would recommend to the mayor that that was not the most prudent course of action," Flanagan said. "Look, he took a shot. He decided he wanted to do something, and the good news for the taxpayers of this state is, he didn't get it. We have the majority, and in some ways, his actions helped us politically. Because a lot of the things that he stands for, people outside the City of New York find anathema to their own interests."

On Monday, when de Blasio was asked about the fact that Senate Democrats did not try to grab the majority during the chaos caused by Skelos' arrest, he said, "I'm certainly not going to speak for them. They understand their circumstance better than I do. It's a very sad moment in Albany – let's face it – and a moment that's somewhat unstable." The mayor went on to allude to the 2016 elections, when Democrats will be hoping to ride a Hillary Clinton wave into control of the chamber. "You know, the future – obviously there will be an election next year that will determine the fate," de Blasio said, "but I think that State Senate Democrats are dealing with a situation as best they can right now."

Close de Blasio ally and City Council Speaker Melissa Mark-Viverito was specific in issuing a statement congratulating Flanagan. "With so many important legislative issues in Albany - from affordable housing, to education to paid family leave - it's essential that the Legislature be able to continue it's critical work and I look forward to working with Senator Flanagan to make New York a better place," Mark-Viverito's statement reads.

Tenant activists have already written off the Republican conference as a whole because of members' connections to the real estate industry. De Blasio recently issued a housing policy agenda that supports a number of measures to strengthen rent control laws - Republicans are said to want a straight renewal of rent laws in exchange for continuation of the controversial 421-A tax abatement.

Groups tied to Glenwood Management - the developer named in charges againt both Silver and Skelos, gave Flanagan over $40,000 in the last few years, according to a study by Common Cause NY. Reporters repeatedly asked Flanagan if he was the subject of any investigations and he repeatedly said that there was nothing to worry about.

Flanagan takes the reigns of the Senate in what some have come to see as a "post unity" era. Skelos and his conference suffered major push back from the Conservative Party and upstate Republicans for cooperating with Cuomo to pass marriage equality, the SAFE Act gun control measures, and the last minimum wage increase.

With the slimmest of majorities, many expect Flanagan will look to bolster his conference by appealing to the base with attacks on de Blasio and pushback against his progressive agenda. Flanagan's opponent in the race to replace Skelos, John DeFrancisco, had the backing of many upstate and western New York politicians. Flanagan will need to appeal to them to keep the the party from fracturing.

To some Republicans Flanagan represents the more liberal branch of the party because of his support for the recent gun laws. On Monday the New York State Rifle and Pistol Association issued a statement saying Flanagan's election, is "a divisive blow to the freedom loving people of New York and should send a chill down the spine of every gun owner since the new leader voted for the so-called SAFE Act."