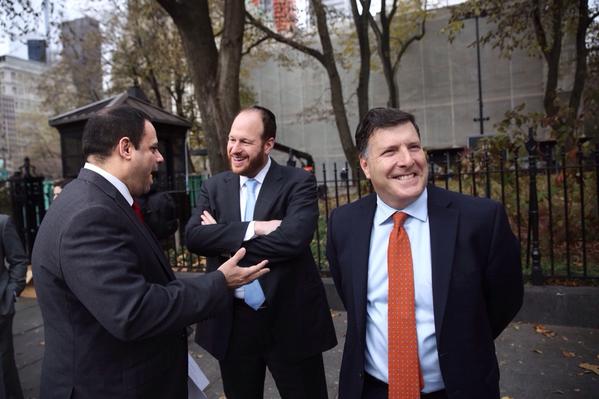 CM Weprin, right, has accepted a position in the Cuomo Administration (William Alatriste)

A legislature plagued by scandal; two new, inexperienced house leaders; a governor facing the lowest approval ratings of his tenure; and only a few weeks to get anything done. This is the setting for Mark Weprin's return to Albany, where he'll be tasked with fostering dialogue, brokering deals, and making progress in a new role.

"I'll be starting out waist-deep, but I remember how to swim," Weprin told Gotham Gazette on Tuesday while he was in Albany officially formalizing the hiring process to become Gov. Andrew Cuomo's Deputy Secretary for Legislative Affairs.

On Monday, Weprin announced he would be taking the position and resigning his Queens City Council seat. He has yet to officially step down because, he joked, "I'm not someone who quits a job before he is sure he has a new one. But I could start as soon as next week, as soon as the State Troopers are done calling my neighbors to make sure I check out."

It is in part Weprin's renowned sense of humor that makes him a good fit for his new position, along with his many years of experience in the Assembly, and positive reputation among colleagues at various levels of government. With only 15 days remaining on the legislative calendar, the Cuomo administration and new legislative leaders have to negotiate major deals to renew the sunsetting mayoral control of schools, rent laws, and 421-A tax abatement for developers, along with attempting to make final policy on a host of issues either touted by Cuomo, but left out of the state budget, or by members of the Senate or Assembly. Weprin is diving right into the policy-making mix.

"I think my experience [in state and city government] will be a big advantage because I know the issues: rent control, 421-A, school governance, these are all city issues I've worked on," Weprin said. "It helps that I know the process."

It will be Weprin's job to find common ground among various parties. It doesn't sound like an easy job, but Weprin may be one of the few candidates with the experience to get it done. A number of legislators told Gotham Gazette under the condition of anonymity that they don't envy Weprin's position - not only because of the chaos in the Legislature but because of Cuomo's reputation as being a very hands-on and demanding boss.

Weprin comes into the role without naivete or rose-colored glasses; he's been a part of the sausage-making for decades. Mark Weprin won a special Assembly election in 1994, replacing his father Saul, the former Speaker. In 2009 Mark won a city council seat previously held by his brother David Weprin, who decided to run for comptroller, then wound up in the Assembly himself, where he is now (though there are rumors that David might run in the special election to replace Mark).

It is Mark Weprin's wealth of experience in city and state politics and the relationships he built along the way that he hopes will help him deliver for Cuomo. "I was very excited when the governor asked me to come work with him. I've known the governor since we were teenagers," Weprin told Gotham Gazette. "It's a job that has been 40 years in the making."

Sources told The Observer that Weprin was not fully satisfied in the Council, where he attempted to become speaker at the end of 2013. His departure from the Council will create the third special election in the city this year (the other two just took place on May 5, one was a congressional seat, the other a state Assembly seat). It will be up to Mayor Bill de Blasio to set a date once Weprin formally resigns.

For Weprin's new boss, the urgency of now includes overcoming the weight of a scandal-plagued capital and a long list of policy goals. While much will come down to meetings among Cuomo, Assembly Speaker Carl Heastie and Senate Leader John Flanagan, Weprin will be tasked with attempting to find consensus on an increase in the minimum wage, a tax credit for donations to private and charter schools, the DREAM Act, and raising the age of criminal responsibility - all parts of Cuomo's executive budget proposal and remaining on the table during legislative session set to wrap in mid-June.

Meanwhile, a Marist poll released on Monday found Cuomo's approval rating to be the lowest since he took office. Only 37 percent of those surveyed found him to be doing a good or excellent job. The pollsters attributed the rating to corruption concerns.

Cuomo's office would like to counter the slumping polls and cynicism about New York government with achievements, but it may be harder to get things done in the Legislature with such low approval ratings.

Weprin's hiring comes as the Cuomo administration attempts to beef up its second-term staff and during a time when the governor has been handicapped in pushing his legislative agenda due to the chaos caused by federal probes. Former City Council Speaker Christine Quinn joined the administration as a special adviser in January of this year and has taken some lead on the issue of campus sexual assault - the governor has made addressing rape on college campuses a top priority.

Assembly Member Karim Camara of Brooklyn resigned his seat in February to join the administration as director of Cuomo's new Office of Faith-Based Community development.

Weprin comes in at the center of policy deal-making and will likely be mostly working behind the scenes. He said he expects to not only help Cuomo but to also be a bridge between houses of the Legislature. "I think I will be able to help find common ground between the Assembly and Senate. I've served with most of the people in the Assembly, and the people in the Senate who used to be in the Assembly. People know me," said Weprin. "I plan to be an honest forthcoming voice for the governor and get the governor's issues done, but also to advocate for the legislature and let them know what the realities are, what the hold up on some issues might be."