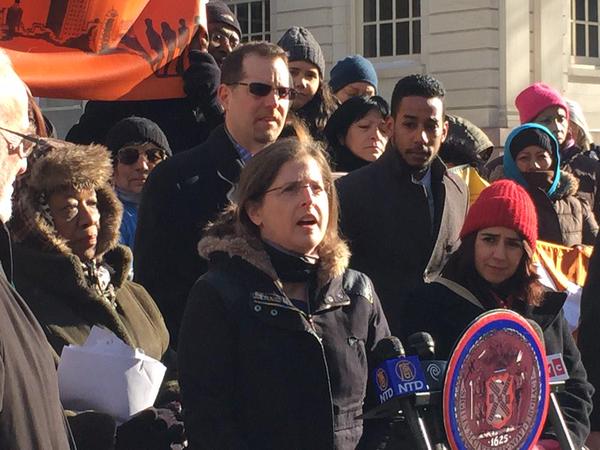 The effort, in part led by Council Member Helen Rosenthal, a Progressive Caucus vice-chair, drew feedback from caucus members to identify where the mayor’s budget is in line with the group’s progressive agenda and where it still needs attention. “It is really the moral document behind the rhetoric,” Rosenthal told Gotham Gazette of the city budget in a Wednesday phone interview.

The council members, 18 of the body’s 51 total members, largely commend de Blasio for his executive budget, released last week, that focuses on tackling income inequality, particularly through commitments to housing, workers’ rights, and civil legal services. “On the whole there’s no question it’s a very progressive, very impressive, and fiscally responsible budget,” said Rosenthal, who is a budget expert and chairs the Council’s contracts committee.

But, Progressive Caucus members also pointed to certain priorities which complement the mayor’s own efforts and will be a part of budget negotiations over the next few weeks. “Some are smaller indications, some are bigger,” said Rosenthal. “But they all get to the same point,” she said, alluding to the work of "advancing opportunity for all New Yorkers," as stated in the letter, a copy of which was read by Gotham Gazette.

For instance, the letter applauds the mayor for redirecting $506 million to the New York City Housing Authority through 2019, and providing an additional $300 million in capital funds over the next three years. But the mayor’s rightsizing initiative has created the need for more resources for relocating families, they say in the letter. The caucus calls on the mayor to create a fund similar to the Council’s Moving Allowance Program that helps low-income tenants relocate. It also asks for more funding for Housing Preservation and Development’s (HPD) Alternative Enforcement Program that undertakes maintenance work on dilapidated buildings.

The mayor, in his executive budget, adjusted the income of 35,000 contract workers to provide them a living wage increase. The Progressive Caucus welcomed this measure. “The Caucus shares in your belief that a hard day’s work deserves a fair day’s pay,” reads the letter. Caucs members hope, however, that the mayor would expand this to all 125,000 city-contracted social service workers.

“The point that this document intended to make is that we’re not just saying it. We’re giving exact examples,” Rosenthal said.

Among the other allocations and initiatives the caucus praises in its letter are the $78 million commitment to mental health services; the $1.8 million increase for the Commission on Human Rights; $18.9 million for the municipal identification program, IDNYC; improvements in community safety; and the efforts to reduce homelessness.

Caucus demands are both targeted and general. Among other things, the members are pushing for increased funding for seniors; restoring $8.7 million for park maintenance employees and greater funding to the Green Thumb community garden program; money to provide six-day service in libraries; creating an LGBT liaison at the Department of Education; providing green education programs; increasing support to worker cooperatives; tackling viral hepatitis cases; addressing disparities in school athletic opportunities, particularly for young women and students of color; and increasing funding for the Office of Special Enforcement to tackle illegal hotels.

The letter also indicates the caucus’ disappointment for the lack of funding for oversight and protection against employer abuse. Earlier this year, Speaker Melissa Mark-Viverito  proposed the creation of an Office of Labor Standards for this very purpose.

Although Mark-Viverito has technically not signed the letter, the agenda laid out in the document is in line with the City Council’s preliminary budget response put out by Mark-Viverito, Finance Committee Chair Julissa Ferreras, and their fellow council members. Mark-Viverito was a co-founder of the Progressive Caucus with Council Member Brad Lander, but she has formally removed herself after becoming speaker. The caucus is currently co-chaired by Council Members Antonio Reynoso and Donovan Richards; Council Member Ben Kallos and Rosenthal are co-vice chairs. After outlining his executive budget last week, de Blasio is in Washington, DC and California this week talking about the fight against inequality in New York and nationally. He unveiled The Progressive Agenda to Combat Income Inequality in DC on Tuesday with a large group of collaborators and co-signers.

Moving forward in the city, the final deatils of the budget will be worked out before the June 30 deadline, and Rosenthal said the progressive caucus will be asking detailed questions about where de Blasio’s latest iteration falls short and why. Publicly, these questions will be raised during the Council’s weeks of executive budget hearings set to begin next week. Following that, Progressive Caucus members will reconvene to give their input to the Speaker as Mark-Viverito works with the entire Council and negotiates with the mayor.