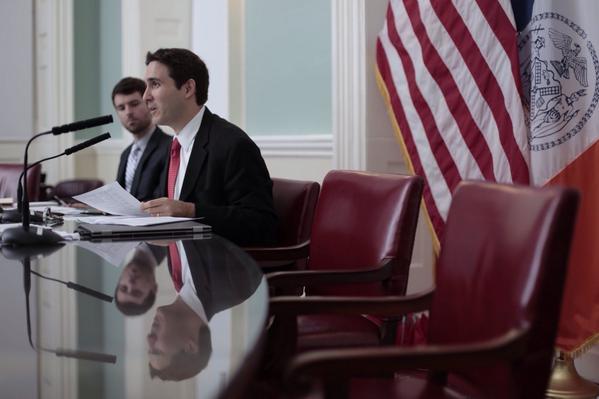 City Council Member Ben Kallos, chair of the governmental operations committee, will introduce a resolution at Thursday’s full-body Stated Meeting calling on members of the United States Congress to commit to a constitutional amendment that would limit independent expenditures in election campaigns. It is a move aimed at reducing the “dark money” spent during political campaigns and to counteract the Supreme Court’s infamous Citizens United ruling.

Kallos’ resolution specifically calls for the United States Senate and House of Representatives to pass S.J.Res.5 and H.J. Res.22, respectively, which would authorize Congress and states to set limits on the raising and spending of money by candidates and others to influence elections.

Big money flooding elections has been an increasingly fraught issue since the United States Supreme Court’s decision in the Citizens United case which allowed independent political spending as a form of free speech protected by the First Amendment. The proposed constitutional amendment would invalidate that decision - Kallos move in the New York City Council is indicative of a growing national movement in favor of negating the Court’s decision.

Just last month, Democratic presidential candidate and former New York Senator Hillary Clinton expressed support for a constitutional amendment to tackle the problem of hidden money in politics. Speaking at Kirkwood Community College in Iowa, she said, “We need to fix our dysfunctional political system and get unaccounted money out of it, once and for all, even if that takes a constitutional amendment.”

To be sure, a presidential candidate’s campaign speech and a City Council resolution, which has no legal binding, but is an expression of support, do not an amendment make. But, there is growing cynicism about the influence of money in politics and there is special attention being paid to the Super PACs and their independent expenditures that often make it unclear where political messaging is coming from and who is paying for it. Kallos' resolution is expected to find heavy support in the overwhelmingly Democratic City Council.

Jonah Minkoff-Zern, co-director of Public Citizen’s Democracy Is For People campaign worked with Kallos’ office on the resolution. “This resolution is an important element in moving forward the effort in New York State and nationally for support for a constitutional amendment,” said Minkoff-Zern.

According to Minkoff-Zern, 16 states, 20 local municipalities in New York and 650 municipalities across the country have, in one form or the other, called for a constitutional amendment negating Citizens United.

“Particularly right now in New York State we’re close to being the 17th state,” he said.

In the state Legislature, 76 State assembly members, a majority, signed a letter to Congress last year in support of the amendment. However, only 28 of 63 members of the state Senate signed the letter. Minkoff-Zern believes the City Council resolution will also send a strong message to state senators and members of Congress from New York City who have yet to express support for the constitutional amendment.

Campaign finance reform is currently a hot button issue in the New York State Legislature where a bill to close the LLC loophole, which allows unlimited campaign contributions to individuals and parties through multiple LLCs, has languished in the state Senate. The state Assembly almost unanimously passed its version of the bill earlier this week.

“It’s disappointing and disconcerting that Republican Senators in New York State don’t feel compelled to act,” said Minkoff-Zern. “It’s disconcerting because it demonstrated that state of corruption that they will act against the interests of their constituents to maintain the status quo that benefits them.”

Kallos, a Democrat from Manhattan, is appreciative that his Democratic and Republican Assembly colleagues passed the bill, and hopes the Senate will follow suit. But, he said, “I think our best shot for many of the progressive policies that our city needs can only happen with a different leadership in the state Senate.”

At City Hall on Thursday, Kallos will introduce his resolution calling for federal action.