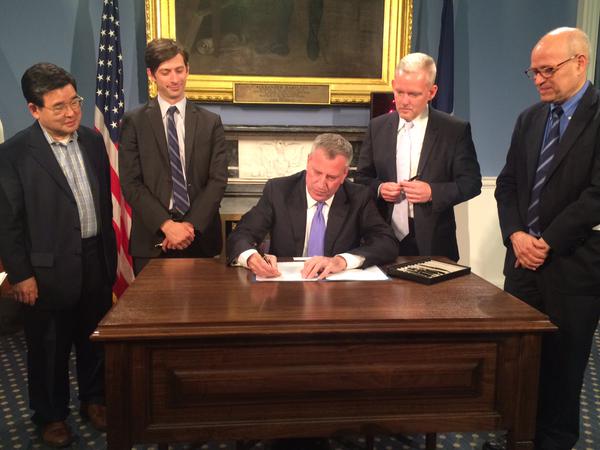 New York may be the considered the country's cultural capital, but the city has never had a comprehensive plan to outline its immense cultural assets, identify areas of need, and chart a path forward. A new law, passed by the City Council and signed on Monday by Mayor Bill de Blasio, will change that.

Council Member Jimmy Van Bramer, one of the bill's co-sponsors and chair of the Council's cultural affairs committee, laid out the plan's importance when introducing the bill. "Culture is the lifeblood of our city," he said to his City Council colleagues. "It inspires us, it teaches us, it engages us, it binds us - particularly in times like these. It drives our economy, but more importantly it feeds our collective souls."

Modeled after plans in other cities - such as Denver, Chicago and Boston - the goal is to assess cultural needs in each of the five boroughs and find new ways to support existing groups, especially in underserved communities. Ideas will also be explored to increase educational programming, develop partnerships with government agencies, and ensure affordability for artists.

The bill's other co-sponsor, Council Member Steve Levin, said that preserving all types of culture is key to the city's identity. "Our culture is who we are," he said. "If you look at every neighborhood throughout New York City it has a history, it has a heart, and it is made up of the hard work of generations that have come from all over the world here. And then we make this amazing, amazing mosaic of what it means to be New York."

The bill quickly earned the favor of the mayor as its thrust fits nicely with his push toward greater equity and opportunity across the city's five boroughs.

Dr. Marta Moreno Vega, president of Manhattan's Caribbean Cultural Center, teaches a class at NYU called "Cultural Governance: The Process of Creating a Cultural Plan for New York City," with a focus on engaging local communities in the process. She stresses that maintaining diversity is essential to a city's character.

"How can you expect a city to thrive if you don't have the mix that you should have at all levels of the economic spectrum?" she asked rhetorically.

Vega said that one way to maintain this diversity is by funding smaller, community-based cultural groups. Currently, a handful of large institutions receive the majority of city funding. Yet programs run by local groups can often have a more direct effect on residents than a big museum might.

"It's not based on going some place. It's based on the quality of life that you live on a daily basis," she said.

"We've been doing a lot with very little for a very long time," she said. "We just really want a playing field where we'll be able to compete for a fair amount of dollars."

Money is also a big factor when it comes to local artists being able to afford housing and studio space. In Mayor de Blasio's recently unveiled OneNYC plan, the city committed to building 1,500 units of "affordable live/work spaces" and 500 "below-market workspaces" for artists by 2024.

Paul Parkhill, executive director of Spaceworks, said this affordability issue is an ever-growing one as New York's cost of living continues to rise. His group is a non-profit that helps provide affordable workspace for artists in Long Island City and Gowanus, with plans to expand to Williamsburg and Governors Island soon.

"Artists get a bad rap often for being agents of gentrification, when they are in fact very rarely the beneficiaries of neighborhood change," said Parkhill.

He said that artists are often forced to move as neighborhoods become more expensive and that he's looking forward to seeing the cultural plan's data on how this trend is playing out citywide.

"I think that artists are actually becoming a lot more deliberate about some of these issues, and what their role is in neighborhood development, so I think it's a good time in many ways for this study to happen," he said.

Answering these questions of diversity, funding, access, and affordability will fall to the city's Department of Cultural Affairs (DCLA). As outlined in the cultural plan law, the agency will work with a specially formed "citizens' advisory committee" - made up of 12 members appointed by the mayor, city council speaker, DCLA commissioner, and borough presidents - to gather information and make recommendations.

While this plan aims to develop a more long-term strategy, cultural equity has already been on the de Blasio administration's agenda. The new IDNYC municipal identification card has been popular and comes with a year's free membership to dozens of cultural institutions, and $23 million was added to the art education budget for public schools last year after an audit by Comptroller Scott Stringer showed major disparities. Van Bramer thanked the mayor for these added funds at Monday's bill-signing.

DCLA is also in the process of studying diversity among board members, staffs, and visitors at the city's major cultural institutions.

Mayor de Blasio and DCLA Commissioner Tom Finkelpearl are excited about the cultural plan, as they both highlighted when de Blasio signed the bill into law.

In a statement Monday, de Blasio put the new law into context. "There's no doubt New York City is a cultural center of the world, and the arts are essential to our economy, our schools, and our vibrancy as a city," de Blasio said. "We are committed to ensuring all New Yorkers have access to cultural activities, and this comprehensive plan will help unify our initiatives aimed at lifting up all New Yorkers through arts and culture."

Once all of the initial information has been gathered, the official plan must be completed by July 2017, just over two years from now. An option to revise it every 10 years is written into the law, with a report required every two years on progress being made to achieve the goals in the plan.

Just before the law was signed, Finkelpearl told Gotham Gazette that he and his agency are looking forward to working toward "this vision of 'one New York' as it's expressed in our cultural community and to seek feedback and new ideas from residents."

Marta Moreno Vega said the most important thing to keep in mind while conducting surveys across the five boroughs is that art can mean many different things to different people.

"Art is everywhere. It's cooking, it's how you dress, it's how you understand how other people live," she said. "The question becomes how do you have a society that allows its richness to flourish?"