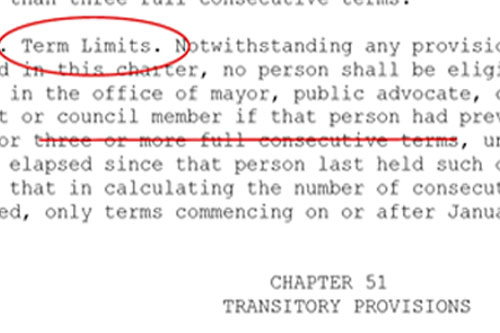 Voters will get their chance to opine on term limits -- but little else of similar magnitude -- this fall after the city Charter Revision Commission voted unanimously Wednesday to put a two-term limit proposal on the ballot.

If it is approved by the voters in November, the proposal would grandfather current elected officials into the three term limit and not affect anyone elected to their first term until after 2013. The commission was split on the time frame, voting 9 to 6.

The commission also approved a ballot proposal to prohibit the City Council from revising the term limit law to affect incumbents. If approved, the measure would prohibit the council from approving a term limit extension similar to what it controversially did in 2008.

Should the voters reject the term limit question, the three-term limit for all elected officials would remain.

Though term limits made it on the ballot, scores of other issues were bypassed by the 15-member body, whose members are all appointed by Mayor Michael Bloomberg. Among them was a proposal for nonpartisan elections -- a pet issue of the mayor's, which sparked heated rallies and rigorous debate across the city.

The commission also took rain checks on issues related to land use, the role of the borough presidents and the public advocate as well as independent budgeting for some of the city's oversight agencies.

In the end, only seven issues will appear on the ballot this November in addition to term limits, including a proposal to require the disclosure of independent expenditures made on behalf of candidates and a measure that would halve the amount of signatures needed to get on the ballot. The exact number of questions voters will get has not been determined. The commission will meet later this month to approve the exact wording and number.

When empanelled in March, the commission was given the broad task of examining every nook and cranny of the city's constitution. While members of the commission say they did not have enough time to thoroughly examine some of the byzantine areas of the government's structure, critics expressed disappointment that the body couldn't have done more with less.

Despite some dissatisfaction with the course the commission took, Chairman Matthew Goldstein called the final set of proposals a job well done.

"We have been empanelled for less than six months. What we have done in that six months is unprecedented," said Goldstein. "Given what we have accomplished this far, I am very pleased."

From the get-go, Goldstein cautioned that the commission had only six months to digest, examine and determine what to put to the voters this fall. Given the time frame, complex issues, like whether to reform the city's complicated land use process or do away with the public advocate, were shelved.

Critics said yesterday the commission could have made the time.

"By excluding forward thinking proposals from the ballot -- from overhauling the city's approach to long-term planning to rethinking the Department of Buildings with an Office of Inspection, to bolstering independence for elected and oversight agencies with independent budgets -- the members of the Charter Revision Commission are missing a historic opportunity to restore confidence and interest in government among generations of New Yorkers," said Manhattan Borough President Scott Stringer in a prepared statement.

Up until this week, the commission was still contemplating putting a proposal on the ballot for nonpartisan elections. Given the uphill political battle it faced, Bloomberg declined to push for the measure at the commission, effectively making it moot.

That too disappointed observers.

"An opportunity to put before the voters some bold proposals on city government has failed to be seized with the nettlesome issue of term limits taking up a large part of the appetite for revision," said Dick Dadey, the executive director of Citizens Union, the sister organization to Gotham Gazette's publisher and a staunch supporter of nonpartisan elections.

What's In and Out

By far the most deliberated proposal the commission approved last night was to grandfather 32 council members, the comptroller, public advocate and two borough presidents into the three-term limit law should the voters revert back to two terms. The commission also considered applying the limit immediately and to apply it to those elected for the first time in 2009.

Both of those proposals were narrowly defeated.

All of the other proposals to appear on the ballot were approved unanimously.

Voters will face myriad issues come fall -- from government integrity and transparency to voter participation. On independent expenditures, the voters will have to decide whether to force those spending more than $1,000 to disclose their spending to the Campaign Finance Board.

In the ballot box, voters will be faced with whether to consolidate the Campaign Finance Board and the Voter Assistance Commission. They will have to determine whether during the siting of waste or energy facilities a map used during the deliberative land use process would factor in similar private, state or federal facilities. The measure is aimed at increasing transparency when determining where to put these controversial facilities.

They will also be asked whether fines for conflicts of interest violations should be upped from $10,000 to $25,000, among other proposals.

Immediately after sending proposals to the ballot, the commission disbands. Should the mayor want to revisit these untouched larger issues, he would have to appoint another commission.

When asked yesterday whether Bloomberg would move to empanel another charter commission after November, the mayor's office said he has not publicly taken a position yet.

"It appeared obvious that at least the mayor had a prime objective and that was to get term limits out of the commission and before the voters," said Doug Muzzio, a professor at Baruch College. "The question then becomes does the mayor fulfill his promise to have this more broadly investigated by reconstituting or reappointing a charter commission after the voters vote in November."

Should the mayor make that choice, Goldstein would not guarantee he would stick around. Goldstein, chancellor of the City University of New York, said last night he has a lot on his plate already.