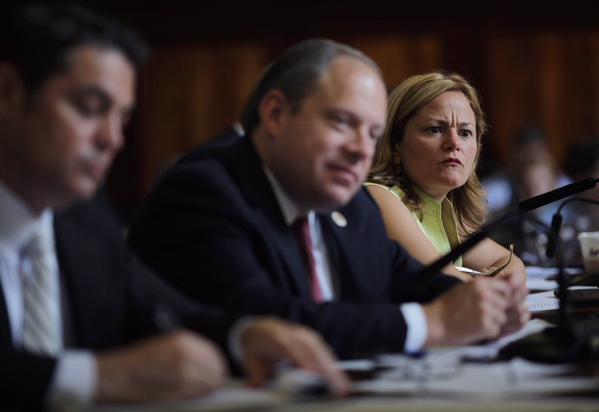 Wednesday’s oversight hearing made it clear— the question is not if the City Council will move to reform the city’s bail system, but how much reform will they be able to accomplish with their somewhat limited power.

Though the Council appears certain to move to create a $1.4 million city-wide bail fund as proposed by Council Speaker Melissa Mark-Viverito, many advocates called for an elimination of cash bail altogether, and many of the reforms suggested at Wednesday’s hearing would require an amendment to the state’s Criminal Procedure Law - an act that the state legislature would have to take up.

“Until we are able to directly change the broken system, we are going to work within it to limit its injustices,” Council Speaker Mark-Viverito promised Wednesday. The speaker gave opening remarks at the hearing, reiterating her call for major reforms to the justice system.

Over a dozen public defenders, advocates for bail reform, and representatives from the Mayor’s Office of Criminal Justice testified over the course of more than four hours, often giving the same arguments and statistics— that cash bail discriminates against the poor, the merits of supervised release programs, the cumbersome and unjust bureaucracy tangled in the process of paying bail— that boiled down to the same sentiment.

“Our bail system is broken,” said Council Member Rory Lancman, the chair of the Committee on Courts and Legal Services. “Too many people are detained on Rikers not because they have been convicted of a crime, but simply because they are too poor to make bail. This hurts defendants and it hurts taxpayers too, who pay $125 million each year to keep pretrial detainees on Rikers.”

Jerome McElroy, the executive director of the New York City Criminal Justice Agency, a private non-profit agency contracted by the city to provide pre-trial services, recommended that a commission be created to develop a new system that establishes a presumption of release for all non-violent cases, prevents anyone from being detained simply because of his or her inability to post a bond, and limits consideration of pretrial detention to “only the most serious cases.”

“Since each of these elements will provoke serious debate, as will reconciling any changes with due process and speedy trials rules, I expect that significant and much-needed reforms will not be accomplished quickly,” McElroy said.

While most of those testifying said they supported the total elimination of cash bail, many focused their testimony on targeting policies and practices that the city could adopt while continuing to discuss such a significant reform. They cited discouraging district attorneys from asking for bail in misdemeanor cases, reconfiguring the bail-paying process, ensuring that defendents’ financial circumstances are taken into account when setting bail, and expanding supervised release programs.

The one notable exception was the testimony given by James Quinn, the senior executive assistant district attorney representing the Queens County District Attorney’s Office.

Though Quinn expressed support for making it easier to post bail in the counties where a crime is committed (currently family members of defendants in Queens must personally go to either Rikers Island or corrections facilities in the Bronx, Brooklyn, or Manhattan to post bail once the defendant has been transported to Rikers), he sharply criticized the proposal to set up the city-wide bail fund.

“Bail is designed to ensure that the defendant appears in court when required. It means that he has a financial stake in his appearance,” Quinn said. “If he does not show up, he loses his money. If the City posts the bail, and the defendant does not appear, he loses nothing.”

Quinn’s statement appeared to resonate with at least one New Yorker. Following the hearing on Twitter, one individual tweeted at Council Member Lancman: “When is this council up for election? Is [Mark-Viverito] for real? I should pay [defendents’] bail?"

The exchange gets at a key issue related to public bail funds: rate of return. One pilot program in the Bronx has noted a 98 percent success rate, thus allowing the fund to replenish itself as bail loans are returned when defendents appear for their court dates.

The Council appears likely to act on the bail fund even without the mayor’s approval, though it is an ongoing part of budget negotiations taking place this month. De Blasio has acknowledged the need for bail reform, but his representatives at Wednesday’s hearing did not commit to anything. Council Member Steven Matteo, one of three Republicans of the Council's 51 members, voiced his opposition on social media Wednesday afternoon, tweeting that a bail fund "is a complete nonstarter" for him, and that "Giving a 'Get Out of Jail Free' card courtesy of the taxpayer is wrong."

Paying mind to concerns during the hearing, Lancman advised Ann Jacobs, the Director of the Prisoner Reentry Institute at John Jay College to “be sensitive to the view of the public” who are concerned about re-arrest rates for defendants out on supervised release programs. Such programs serve to release eligible non-violent defendants who would otherwise be held on bail while requiring ongoing communication.

“I just wouldn’t be dismissive of the public’s concerns about people who are committing low-level misdemeanors,” Lancman said.

But some, like Cherise Fanno Burdeen, the executive director of the Pretrial Justice Institute, pushed harder, saying that such programs would not be necessary if cash bail were eliminated. “A strategy that employs filling potholes is not the same thing as doing what’s needed to repave the road,” Burdeen said.

“The reality that the mayor has to deal with is, we can’t change the statute,” Lancman said. “And the state legislature is not able to deal with this at the moment.” Lancman’s comment was a reference to the fact that state lawmakers are at the end of their legislative session in Albany and struggling to pass even extensions of existing regulations that almost all agree must be extended, especially related to rent regulations.

The Council could look to enforce many of the proposals outlined in Lancman’s preliminary recommendations on bail reform, which include expanding supervised release programs, requiring all actors in the justice system to undergo implicit bias training, requiring the Department of Corrections to create a website that would allow cash bail to be paid online, and requiring that courts inquire into defendants’ financial circumstances before setting bail, something already provided in the current statute but rarely done.

“We can get it done without the administration’s support,” Mark-Viverito told reporters after she delivered her statement.