PHOTO OF THE WEEK: Mayor Bill de Blasio speaks at the groundbreaking for the Cornel Technion campus on Roosevelt Island, praising former Mayor Michael Bloomberg, who announced a $100 million donation to the school; via John M. Mantel for the New York Post 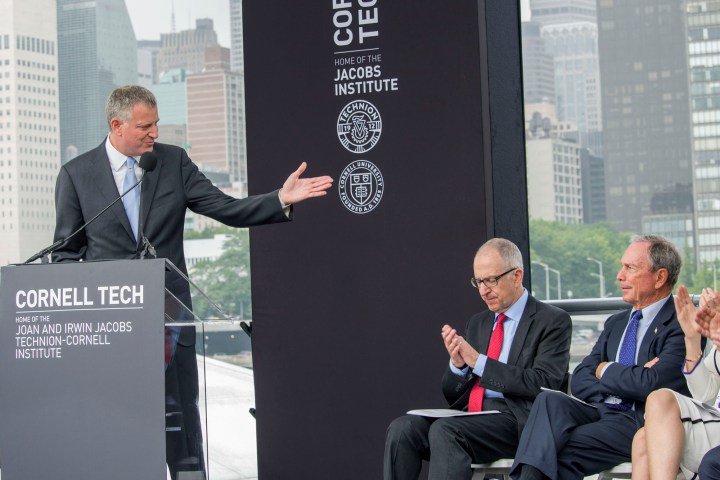 1. Rent Regulations Expire...Then Extended: State lawmakers allowed rent regulations to expire this past Monday to the frustration of about two million New York City tenants who live in rent-regulated apartments, and many Democratic state legislators and City Council members. In a statement released on Monday, June 15, Governor Cuomo warned that “landlords should under no circumstances believe that their responsibility under the current rent stabilization program has expired.” With negotiations at an impasse, Cuomo and legislative leaders agreed on Thursday to sign a short extension of the regulations, applying retroactively and through Tuesday, June 23. Negotiations continue.

2. Some Important Albany Business Done: ‘Affirmative Consent’ on College Campuses, Nail Salon Regulations, and Port Authority Reform: No deals yet on rent regulations, 421-a, mayoral control of schools, the charter school cap, ‘raise the age,’ or a whole host of other high-profile issues, but, a few key items were dealth with this week. Legislators approved the campus sexual assault bill redefining consent on Tuesday, one of Gov. Cuomo’s top priorities. A bill allowing pregnant women to enroll in the New York State Health Exchange at any time was passed. A nail salon bill, which allows regulation of the industry that recently came under heightened scrutiny thanks to a New York Times series, was passed. And, Thursday evening a Port Authority reform bill passed, with Assembly Speaker Carl Heastie saying the bill is important reform ”by increasing transparency, improving regulation and instituting more independent oversight.” The bill will still need approval from New Jersey’s state legislators.

3. NYC Office of Civil Justice Created: The bill creating an Office of Civil Justice and a Coordinator of Civil Justice was unanimously passed in committee in the last week of May before being voted on by full City Council, and then signed into law by Mayor de Blasio this past Tuesday. Civil court, unlike criminal court, does not have “the right to counsel” even though cases about eviction, child custody, and deportation are often life-changing. The new office will be geared toward consolidating many of the different efforts to bring legal aid and representation to low-income New Yorkers.

4. First Arrest By New Tenant Harassment Prevention Task Force: On Wednesday, Attorney General Schneiderman, Mayor de Blasio and the New York State Homes and Community Renewal Commissioner James Rubin announced that the city/state Tenant Harassment Prevention Task Force had arrested and indicted landlord Daniel Melamed. It was alleged that Melamed jeopardized the health and safety of his tenants, including a six-year-old child, and forced at least one rent regulation tenant to move out. In the press release on Wednesday Attorney General Schneiderman warned that the “charges send a strong message to landlords across New York City: if you harass, intimidate, or jeopardize the health and safety of your tenants, we will come after you with the full force of the law.”

5. Groundbreaking At Cornell Tech: Cornell and Technion-Israel Institute of Technology won the 2011 competition to build an applied sciences graduate school to “foster high-tech entrepreneurship in the city” and its groundbreaking ceremony just took place this past Tuesday at the Roosevelt Island site. The first stage of construction won’t be finished until 2017 but Mayor de Blasio noted at the ceremony that over the next 30 years this project is projected to create more than 48,000 jobs and bring $33 billion in economic impact. This past Monday, former Mayor Bloomberg also announced a donation of $100 million to the project. The groundbreaking as a rare joint appearance by the current mayor and his predeccessor.