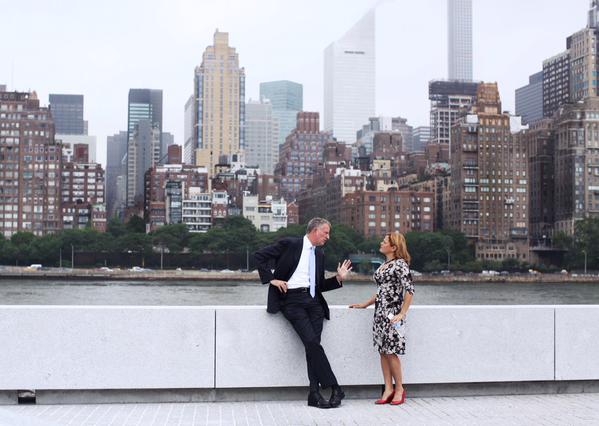 Van Bramer, who chairs the Council’s cultural affairs committee, where the debate over library funding has largely been heard, reminded of the Council’s budget priorities as final negotiations take place between the 51-member legislative body and the administration of Mayor Bill de Blasio. A deal on a fiscal year 2016 budget is due by July 1, when the new city fiscal year begins. Many expect a deal to be announced this week - last year, the first as mayor for de Blasio and as speaker of the Council for Melissa Mark-Viverito, a budget deal was announced on June 19.

Van Bramer and colleague Council Members Vanessa Gibson, who chairs the public safety committee, and Mark Levine, chair of the parks committee, were on NY1’s Inside City Hall on Friday discussing the final stages of budget negotiations.

“Obviously it is a very inclusive and collaborative process, but at the end of the day the mayor and the speaker will conclude with a deal that reflects the work we’ve been doing as a body over the past several weeks and months,” Van Bramer said.

After de Blasio released his executive budget on May 7, council members have continued to push for an increase in funds for libraries, parks, NYPD headcount, senior citizen services, women’s health services, city-funded school lunches for all students, and more. One other high-profile funding question is whether de Blasio will put money toward a city bail fund, as proposed by Mark-Viverito.

In response to the proposed executive budget, Finance Committee Chair Julissa Ferreras and Mark-Viverito released a joint statement in May praising the budget’s strong capital investment and increased funding toward mental health programs, public housing, and after-school programs for students. But they also chastised the lack of investment in policing and universal school lunch.

“The City Council is disappointed that the Executive Budget does not contain funding for new Police Officers who will help give Commissioner Bratton the tools he needs to continue to keep crime low while also improving police-community relations. The Council was also disappointed to see the Executive Budget does not expand funding for universal free school lunches and breakfast after the bell,” the statement says. “The Council will continue to advocate for these priorities moving forward.”

The Wall Street Journal reports that the sides are closing in on a deal to expand the NYPD force by several hundred and that an announcement on that and the rest of the budget could be as early as Monday night. As a city budget deal approaches, a look at several key issues being negotiated:

NYPD Headcount
For a second straight year Mayor de Blasio declined to include money in his budget to hire 1,000 new police officers per the Council’s request, led by Speaker Melissa Mark-Viverito. De Blasio said in May that the NYPD is doing an “outstanding” job as it is and that because officers are spending less time on unnecessary stop and frisks and low-level marijuana arrests, they are freed up to do more of the community policing Council members are seeking the additonal headcount to perform.

Mark-Viverito has since continued to push for additional officers. The Wall Street Journal reported Sunday night that the de Blasio administration will likely expand the size of the police force in exchange for capping overtime for officers.

City Bail Fund
In her February State of the City address, Mark-Viverito proposed a $1.4 million city-wide bail fund to assist low level, non-violent offenders who are unable to make bail. De Blasio declined to provide money for the bail fund in his executive budget.

However, less than a month later, de Blasio endorsed “some sort of bail reform” following the suicide of Kalief Browder, who was detained at Rikers Island for three years before he stood trial and his charges— that of stealing a backpack— were dismissed.

After delivering a statement at an oversight hearing on bail reform last week, Mark-Viverito told reporters that the council could “get [the bail fund] done without the administration’s support.”

On Thursday, de Blasio was asked about Mark-Viverito’s assertion and said, “we’re in a budget discussion and all items are being discussed. I believe in the need for bail reform, and there’s several different ways to do that.” He said that city leaders “don’t want to see people going to jail simply because they can’t afford a small amount of bail for a minor offense,” but said that “there’s more than one way to address that issue” and that he is “particularly focused on...some of the efforts to have a supervised release effort for very low-level crimes that we’ve seen done effectively before.”

Universal Free School Lunch
Council members and Public Advocate Letitia James are pushing de Blasio to provide funding to pay for universal free lunch for all public school students in the city. De Blasio has pushed back on that proposal, arguing that the pilot program his administration funded last year that provided free lunch to all middle schoolers has yielded “mixed results.” Advocates for the program continue to push de Blasio to add funding.

Library Funding
Council Member Jimmy Van Bramer has requested an additional $65 million for libraries, arguing that the need for library services is growing and that funding is below levels of several years ago. The executive budget includes $314 million. The de Blasio administration has also committed to a $300 million ten-year capital budget for libraries, an act representatives call “unprecedented.”

Senior Services
After the administration asked the Department of Aging to cut its budget by $3.1 million, Council Member Margaret Chin has requested an additional $11.5 million for senior services. The budget originally provided $2.6 million, then later added another $2 million to fund elder abuse programs.

Women’s Health Services
The Council Women’s Caucus, led by Council Member Elizabeth Crowley, has called on City Hall to support the Women’s Health Initiative— nearly $4 million baselined during the Bloomberg administration for groups that support women’s health services, including Planned Parenthood, That money is not included in de Blasio’s executive budget, though an administration source has said that the funding will be in the adopted budget after being reappropriated. Crowley, other Council members, advocates and service providers rallied at City Hall last week.

Parks Funding
The proposed budget includes $1.27 billion for parks, an overall increase of $50 million in spending. But some park advocates and Council members, including Mark Levine, are asking the mayor to invest more in parkland and to add $8.7 million for gardeners and maintenance workers, the New York Times reported.

“The parks budget has been stagnating for years. We only devote about one half of one percent of the city’s total budget for parks, it was triple that in the sixties,” Levine said Friday on NY1. “And you see it in our park system today…For parks in low- and moderate-income communities, they need robust public investment in their park system, which they’re not currently getting.”

When de Blasio unveiled his $78.3 billion executive budget on May 7, he touted investments in affordable housing, struggling schools, and fighting homelessness, while firmly rejecting the Council’s call to to hire additional police officers. However, it appears he may give way and expand NYPD headcount and perhaps a handful of other Council requests as negotiations continue, especially as the city’s tax revenues continue to increase. State Comptroller Tom DiNapoli said earlier this month that the city would end its 2015 fiscal year with a $3 billion surplus. The mayor and Council must come to an agreement by June 30.