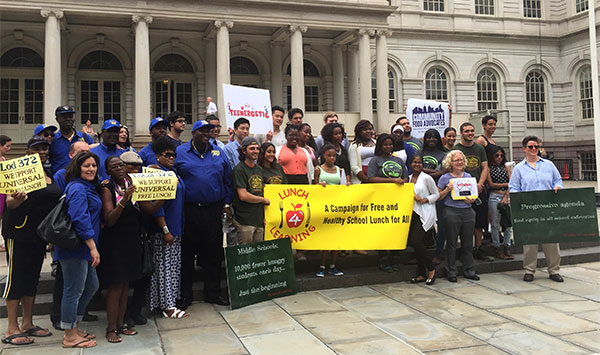 The fiscal year 2016 budget, at $78.5 billion of spending soon to be officially approved, satisfies one key demand of advocates – that of expanding "breakfast after the bell." The name refers to allowing students to eat free breakfast provided by the school in their classroom. The program will be funded for inclusion in 530 elementary schools. The budget also includes funding to continue universal free lunch in all of the city's standalone middle schools. But, this has disappointed advocates who were hoping the free lunch program would be expanded to elementary and high schools.

In New York City, where one in every four child does not have access to enough food, many students depend on schools to provide their only consistently available meals of the day. Members of the City Council, Public Advocate Letitia James, and advocates had led a strong push for the budget to include funding to make school lunches free for all students, regardless of grade level or family income, and for the expansion of 'breakfast after the bell.'

This year's preliminary and executive budgets did not include 'breakfast after the bell' or an expansion of universal free lunch but the final budget includes $17.9 million to expand the breakfast program to 530 elementary schools. City Council leadership considers the expansion of 'breakfast after the bell' and the continuation of the middle school free lunch pilot program successes. A continuation of the middle school program was not included by de Blasio when he unveiled his February preliminary budget, but the Council convinced him to restore it in his executive budget, released in May. At the time, Mark-Viverito said, "Bureaucratic hurdles are not an excuse for letting children go hungry."

In response to the budget deal, Council members focused on gains made, praising the 'breakfast after the bell' provision in the budget for reducing negativity around hunger for elementary school children. "Hungry kids will face less stigma at school because of $17.9 million for 'breakfast after the bell' for 339,000 children at 530 elementary schools, which I rallied for and introduced legislation supporting," said Council Member Ben Kallos in a post-budget statement. Kallos, a strong supporter of expanding free school meals, added that "New York City is now an important step away from being near last among big cities in public school breakfast participation."

Advocates for 'breakfast after the bell' also welcomed the announcement. "New York City students were big winners in last night's budget deal," chief strategy officer for Share Our Strength, Josh Wachs, said in a statement Tuesday. "No child should start the school day on an empty stomach. Thanks to leadership from the Mayor, Schools Chancellor, City Council, and partners in the Powered by Breakfast NYC coalition, they won't have to in NYC public elementary schools."

Through the budget, 'breakfast after the bell' will be expanded to include all of the city's elementary schools by fiscal year 2018. At the moment, it is an opt-in program in New York City with principals deciding if their schools participate. Over 300 of the city's schools have opted in so far, either serving breakfast in classrooms or providing "grab and go" carts for students to pick up food to take into class. At Monday night's press conference, de Blasio highlighted the role that the Council's insistence played and called breakfast an area where there was "opportunity for a major breakthrough" in fighting hunger and thus helping kids learn.

As the expansion of 'breakfast after the bell' was celebrated, supporters of universal free lunch for all city students were less than satisfied. "I'm a little disappointed that it [universal school lunch] wasn't expanded," Public Advocate Letitia James told Gotham Gazette, while expressing satisfaction with breakfast program gains. "New York City should be leading the national conversation on improving nutrition in public schools but instead we're falling further and further behind."

Other advocates echoed this sentiment. "We knew that the Council was championing this issue and that there seemed to be a lot of enthusiasm," says Liz Accles of Lunch for Learning, a coalition-led campaign advocating for universal free lunch. "We're a little stunned that it wasn't in there."

Last year, the city introduced a pilot program under which standalone middle schools provided free lunch to all students. This increased school lunch participation by 10 percent in those schools. While the consensus among advocates was that these numbers were a success, Mayor de Blasio described the results as "mixed" at his executive budget presentation. The mayor reiterated that conclusion at Monday's budget announcement, saying, "The first year of the school lunch program didn't achieve what all of us had hoped." He added that the coming year would involve "a much stronger promotional effort and effort to engage parents and students."

It appears that if the middle school lunch program shows enough progress there may be room for expanding free lunch beyond those grades.

"It's an opportunity that's being passed up," says Accles. "The federal government wants us to do this," she said referring to federal reimbursements for meals served in public schools. Public Advocate James pointed out that because most expenditures would be covered by these reimbursements, it would only cost the city $20 million per year to provide free lunch to all of the city's public school students. This amounts to 0.1 percent of the Department of Education's annual budget.

The drive for universal free lunches and 'breakfast after the bell' has been in large part due to a poverty stigma associated with accepting free school meals, long-offered to students from the poorest households. Around three-fourth of New York City's public school students qualify for free or reduced-price lunches on the basis of a family income below 130 percent of the poverty level, or other criteria such as being food stamp recipients, homeless, or in foster care. Despite the great need, stigma and a fear of being mocked limits student participation in free meal programs. A third of the students who qualify for free or reduced-price lunches don't eat those meals, with participation dropping below 40 percent in high schools. "Given those numbers, I'm really shocked that the mayor did not support expanding free lunch," says James.

Breakfast participation is even lower despite breakfast being free for all students in New York City public schools since 2003. Morning food has been offered before the start of school. Last school year only about 35 percent of the city's low-income students were eating breakfast in school, according to the latest annual report by the Food Research and Action Center, a nonprofit organization working to eliminate hunger and under-nutrition. A combination of factors, including the poverty stigma and logistical problems in getting to school much earlier than the start of the school day, drive down breakfast participation numbers.

Supporters of universal free school meals say that there would no longer be stigma attached to accepting a school lunch if schools provide free lunches to all students and family income is no longer a deciding factor. Similarly, if all students are allowed to eat 'breakfast after the bell' together in their classroom, it would not single out those students who have to arrive to school early just to eat a free breakfast in the cafeteria.

The budget decisions that will dictate spending beginning at the July 1 start of the next fiscal year come as this school year is coming to a close. On Wednesday, the Department of Education announced that its "2015 Summer Meals program, which provides free, healthy breakfast and lunch to children across New York City, will begin this Saturday, June 27, the first day of summer vacation." The program is aimed at students who are food insecure and rely on school meals throughout the year.

From the end of June through September 4, the program will provide free meals to "children 18 and younger" at "1,100 locations, including pools, school, libraries, parks, public housing sites, and community-based organization sites." Children don't have to prove New York City residency or be enrolled in summer school; no application or identification is needed to access food. The DOE said that "a record 8.1 million meals were served" last summer.

Advocates want to see something similar all year round. On Tuesday afternoon, students from Lunch for Learning coalition groups delivered a letter to the mayor and a photobook of 330 pictures from its selfie campaign. They were accompanied by advocates, Council Member Antonio Reynoso, and leaders from Local 372, a union of the city's Board of Education employees. Barbara Turk, the mayor's director of food policy, was at City Hall to receive the letter and photobook on the mayor's behalf.

The message of the student letter was clear: "We are disappointed that expansion of Universal Free School Lunch for all public schools was left out of the budget. We have been working very hard to make this happen and were surprised and upset when you said the middle school results are mixed."

"If I get on line, the rich students will say that I'm eating 'free-free,'" said 16-year-old Aminata, one of the students at City Hall representing Bushwick Campus Youth Food Policy Council. While she has to try to hide when she gets a free lunch at her high school, she says that her brothers in middle school do not have to worry about bullies in the cafeteria because everyone in their school eats free lunches. She often also has to share her free lunch with friends who don't qualify for reduced-price lunch but still cannot afford to buy food every day. "This is not a want, this is a need," said Shaun D. Francois I, president of Local 372.

Though they are disappointed by the budget, supporters of universal free meals, including the public advocate, plan to carry on their efforts to expand the program to all of the city's schools. "We're going to continue to campaign and we're going to continue to keep the pressure on, working with advocates to expand this program so that students will be better nourished ready for the school day," James told Gotham Gazette.

"We know it's the right thing to do," says Accles. "We're going to keep pushing until we get it done."