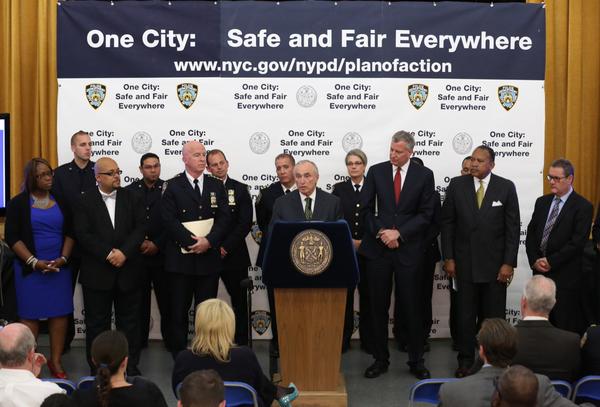 Just one day after NYPD Commissioner Bill Bratton resisted calls from City Council members pushing police reform legislation — which followed the news that 1297 new officers will be added to the force— police accountability was scrutinized by several key players, including the NYPD Inspector General, at a forum hosted by good government group Citizens Union.

The event, held Tuesday evening at New York Law School in front of about 125 people, was centered around the idea that because the police work for and to protect the people of the city, department and officer accountability is an essential part of good government. The issue has also been an extremely hot topic over the past several years, largely around the stop-question-and-frisk tactic and broken windows policing; a number of lawsuits, reforms, and high-profile incidents have occurred.

Mayor Bill de Blasio was elected, in part, on his criticism of the NYPD under his predecessor and de Blasio's promises to reform the department.

"The job of a police officer is to correct conditions. And he is to carry out that task by ensuring that the public isn't harmed, that he isn't harmed, and believe it or not, that the person he is trying to correct isn't harmed," Borough President Adams said. "That's the goal, and we have gone off track in doing so."

Kang, whose group has been highly critical of the NYPD, including under de Blasio, spoke of "a crisis of public confidence," citing the death of Eric Garner, a Staten Island man killed while being arrested on July 17 of last year.

"Underlying the crisis is actually instances where officers have not been held accountable by the department," Kang said. The results of the department investigation of Garner's death have not yet been revealed as a federal probe is ongoing.

Adams, a former state senator who served as a New York City police officer for 22 years, also had strong words for the politicians, judges, and community members he said had relinquished to police commissioners the job of holding police accountable.

"The fact is, countless numbers of good New Yorkers that hung out...at the Museum of Natural History and went to dinner parties and tea parties, they said, 'it's not our children.' So there was a level of non-urgency because many of the children caught up in the system were black and brown and came from economically-challenged communities," Adams said. "We should all be embarrassed by what happened to young people in this city in the last 20 years. We can point to the NYPD in the blue uniform, but the fact is, a whole lot of us in blue suits stood by and watched it happen also - we all participated in it."

Discussion turned to Governor Andrew Cuomo's announcement that he would appoint, for one year, Attorney General Eric Schneiderman as special prosecutor in cases where a police officer kills an unarmed civilian. Kang and Kriss said they supported the measure; as did Borough President Adams in his opening remarks, saying he believes the relationship between police and local prosecutors is "too challenging for the the prosecutor to examine."

"How does the governor know a special prosecutor should be appointed? Has the prosecutor done something wrong? Is there a basis, other than what we read in the paper to distrust the actions of the prosecutor or the grand jurist? I believe you are relieving me of my responsibility which I take very seriously," Vance said. "You're taking it away and giving it to someone who is accountable to nobody, who has no experience— the attorney general, I'm very fond of Eric Schneiderman, but I'm not sure how many homicide prosecutors you're going to find on his staff."

Though Kriss supports the appointment of a special prosecutor, he doesn't believe the attorney general's office is best equipped to serve in that role, and said he is concerned the governor's executive order may be a "knee-jerk reaction" in an attempt to bring comfort to the families of individuals killed by police officers.

"The question is whether or not the attorney general is the best individual, and I don't really believe so, because I don't know if they're capable," Kriss said, citing the complexities and difficulties of setting up and investigating cases involving police officers, especially in the early hours of the morning. "Are we going to have something effective out there?"

When asked about the future of police accountability, both Vance and Eure spoke of body cameras, which Vance described as a "game changer." Eure - the first ever NYPD Inspector General after the position was created in part as a response to stop-and-frisk abuses - was more reluctant to praise the use of body cameras, which the NYPD is expanding the use of in large numbers after a pilot program.

"We'll be opining on the subject of body cameras in the coming months but that is the trend across the country and a whole host of issues come up in that context: how long should the cameras stay on, should police officers notify citizens they're interacting with the camera is on, there all sorts of issues," Eure said. "These are very big issues, very complex issues that haven't been thought through, quite frankly."