Gotham Gazette's Week in Review, Thursday July 2 - our usual Friday feature a day early this week due to the holiday, enjoy:

PHOTO OF THE WEEK: Council Member Corey Johnson celebrates at the Pride Parade, via William Alatriste 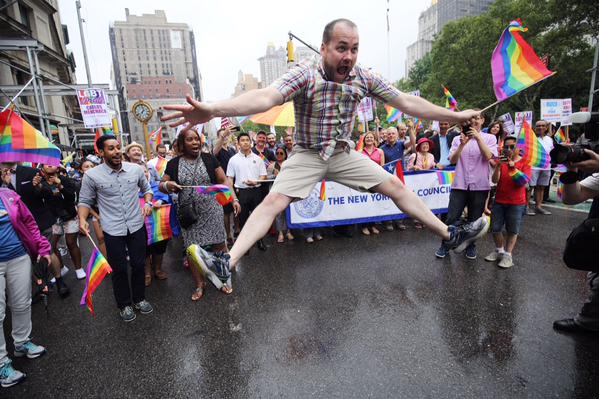 1. De Blasio Slams Cuomo, Leaves for Vacation: On Tuesday, June 30, Mayor de Blasio, First Lady Chirlane McCray, and children Chiara and Dante left for a vacation in the Southwestern and Western United States. They will be returning on Wednesday, July 8. Before leaving, de Blasio filmed an interview with NY1’s Errol Louis for Inside City Hall and then spoke with reporters in his City Hall office, in both instances heavily criticizing Governor Andrew Cuomo and expressing a great deal of frustration about the way the governor has acted toward the mayor and the policies that came out of Albany negotiations.

2. RGB Votes for a Rent Freeze: For the first time in its history the Rent Guidelines Board voted to freeze rents on about a million regulated apartments. On Monday, after four previous open meetings with public testimony, the Board voted 7-2 for freezing new or renewed one-year leases beginning October 1 while tenants signing two-year leases could pay up to a 2% increase. Tenants and their allies have celebrated the vote, which the mayor called "the right move" by board members he appoints. This comes on the heels of a deal to extend rent regulations in Albany that many tenants and their allies call inadequate.

3. NYPD Oversight Hearing: On Monday the City Council heard nine proposed NYPD-related bills, including the two that make up the “Right to Know Act.” The bills deal with police communication with civilians, officers’ use force, and more. “I wish to say respectfully, but firmly, that these are the purview of the police commissioner and the police department, and not of legislative control,” said Police Commissioner Bill Bratton at the hearing, expressing his opposition to the bills. The next night, key stakeholders met to discuss police accountability in an open forum.

4. Capping Uber: The City Council Committee on Transportation heard a controversial bill Tuesday that would require the city’s Taxi and Limousine Commission to conduct a study on how the taxi and for-hire industries affect traffic, air quality, noise, and public health. The bill could put a cap on the number of for-hire vehicles. On the day of the hearing Uber, the most prominent of non-taxi for-hire vehicles offered free rides to anyone using the Uberpool carpool service to go to a protest against the bill at City Hall.

5. FBI Investigating Upstate Prison: The FBI launched an investigation into Clinton Correctional Facility, the prison Richard Matt and David Sweat escaped from earlier this month, related to possible corruption, including drug trafficking. The FBI investigation is said to have been started around looking into how Matt and Sweat broke out of the prison, but has expanded.