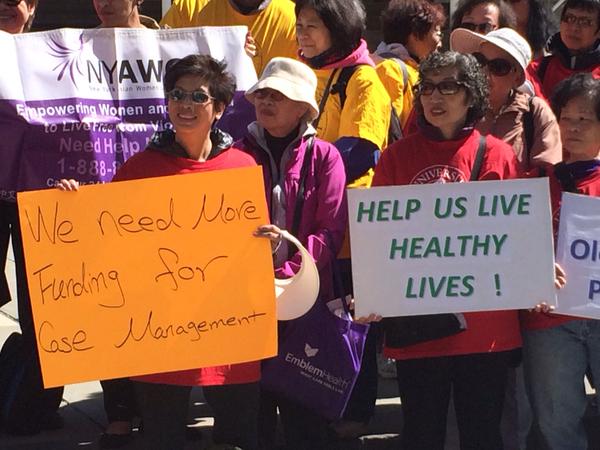 After more than a decade of abuse, she finally called for help. Dialing 311, the 80-year-old widow - who had remained silent for years as the granddaughter she had raised yelled and cursed at her, slapped her, and stole from her - reached out for help after the younger woman threatened to seriously injure her.

She was referred by 311 to JASA, a non-profit serving seniors that contracts with the city. JASA staff helped her obtain an Order of Protection to stop the abuse, put her in a support group, and ensured the police would check on her. But even now, she refuses to have her granddaughter removed from her home and continues to live with her abuser.

This grandmother is among the more than 120,000 New Yorkers believed to be suffering from elder abuse. Both her situation and her unwillingness to report it are typical of the vast majority of elder abuse cases. Except in the most horrific instances, these are not headline-grabbing incidents, and the victims are among society's most vulnerable, often unable to fight for themselves.

Elder abuse includes physical, sexual, and emotional abuse, as well as neglect. Its most common form is financial exploitation. "Elder abuse victims are 300 percent more likely to die prematurely than non-abused elderly," says Risa Breckman, executive director of NYC Elder Abuse Center, citing a medical study. This problem is increasing in scale with New York City's aging population. And with nine percent of the city's seniors estimated to be victims of abuse, it is also a problem that has been remarkably underfunded according to advocates and providers of elder abuse services.

This year, New York City's budget includes $2.8 million in funding for elder abuse services, more than three times the amount devoted to this issue in previous years. "They have it exactly right," says Breckman. "There needed to be more resources for this."

The city's Department for the Aging contracts its elder abuse services to community-based organizations. There are only a handful of organizations—some with surprisingly small staffs—carrying out this work in all of New York City.

These providers execute wide-ranging services such as counseling, support groups, legal advice and counsel, safe haven, and lock changing to keep an abuser out of the house. They also perform outreach to senior centers to make seniors aware of their options and to other groups such as neighbors, doormen, meal delivery personnel, librarians, and even barbers who may be able to recognize and report the signs of abuse.

Since the administration of Mayor Michael Bloomberg, around $800,000 was allocated annually for elder abuse services. This funding often became part of the "budget dance" with the mayor cutting it down and City Council fighting to restore it. Advocates for seniors argued that this was too small an amount for the protection of the over 1.4 million New Yorkers over the age of 60.

Last year, Bill de Blasio's first as mayor, the funding in the budget for elder abuse services did not increase, though the City Council allocated $1 million of its discretionary funds for such services. Seniors and their allies then launched a concerted effort to bring about an increase and it was widely expected that funding by the mayor would jump to over $2 million for fiscal year 2016. But when de Blasio announced his preliminary and executive budgets earlier this year, the funding remained the same as it had been. Advocates then intensified their lobbying, and advocacy groups like LiveOn NY turned out more than a thousand seniors at City Hall between March and June on Advocacy Day, Elder Abuse Awareness Day, and for budget hearings.

In this effort to increase funding, the biggest ally of seniors and senior advocates was Council Member Margaret Chin, chair of the City Council Committee on Aging. "She's a great chair," says Bobbie Sackman, director of public policy at LiveOn NY. Hundreds of seniors came for the committee's executive budget hearing, many having to watch the proceedings from an overflow room. "What we need is a budget that really makes seniors a top priority. And this budget right now is not it," Chin said in her opening remarks at the hearing.

"She wouldn't let it go and she kept pushing back...to the administration saying 'you've got to fund this $2 million,'" says Sackman. Fighting alongside Chin was Council Member Paul Vallone, chair of the Subcommittee on Senior Centers. His opening remarks were equally firm. "The senior population will increase by 50 percent [in the next 10 years] and this budget didn't go up by a dollar," he said. "To me, if that's not a cut, I don't know what is."

Eventually the administration conceded and the adopted budget more than tripled the funding to $2.8 million.

Advocates say the toughest challenge in getting funding for elder abuse is the lack of reporting of such cases. "We have a hidden crisis and we're asking them to fund something that you're seeing the tip of the iceberg of," says Sackman. A 2011 study of elder abuse in New York State showed that only four percent of the cases of elder abuse are reported. "That's why it's important to really do education to let people know that there are services available to help them, that it's nothing to be ashamed about and that they would be able to get help," Council Member Chin told Gotham Gazette.

A close relationship with the abuser is one of the main reasons for low reporting rates. In the vast majority of cases—many studies cite the number at 80 percent—the abuser is a family member. "That's one of the reasons it's so hidden, because people are either afraid or ashamed," says Sackman. "Who's going to report on their son or daughter?"

Some also blame ageism for the lack of attention to this problem. "People assume that someone who is over the age of 60 or 70 or 80 will have some form of dementia and won't be able to report reliably or give information that is pertinent," says Martha Pollack, director of elder abuse services for JASA. "And this is not the case at all." People are often less likely to believe seniors when they complain of abuse.

With a few dozen people and $800,000 from the city budget to deal with all the cases of elder abuse in the city, elder abuse fighting organizations' resources have been stretched thin. "Prior to the city providing this [new increase] we were at a point where we would have to tell individuals we may have to shut the program and we would go around scrambling for money," says Donna Dougherty, an attorney at JASA.

Advocates say that the increased funding will ensure that more elderly people are served. Organizations will be able to hire more staff, do more outreach, and collaborate more effectively with the NYPD and offices of the district attorneys. Dougherty says this funding "has made a tremendous, tremendous difference in our ability to provide this service and our ability to provide it ongoing, to expand, and to be able to tell our clients: 'We'll be there tomorrow, we're not going anywhere.'"

The Carter Burden Center for Aging is another organization that will benefit from the increase in funds in the budget. Michelle Galligan, director of their Community Elder Mistreatment & Abuse Prevention Program, says they will use the money to double their staff, which currently consists of only two social workers.

The organizations contracted by the city are also planning to use the additional $2 million to reach out to more diverse and immigrant communities where victims of elder abuse speak out at even lower rates, either because of cultural norms or language barriers.

The City Council also took this into consideration in the distribution of the $335,000 of discretionary spending allocated to non-profits to carry out elder abuse services. They have allocated $135,000 to New York Asian Women's Center, $50,000 to Sakhi for South Asian Women, and $50,000 for Turning Point for Women and Families, a nonprofit helping Muslim women. "We want to make sure that seniors who don't speak English and who are linguistically and culturally isolated, that they are also able to get information about what elder abuse is, how they can access service and what organizations are available to help them," explained Chin.

But Galligan cautions that even this tripling of the funding is not as much as it seems when divided across the city and translates into $480,000 for Manhattan, where her organization operates. "As much as we're grateful for the increase in funding," she says, "we can always use more."

"We just want to make sure that money stays in the budget, that it's not money we have to keep fighting for, because we want to grow it," says Sackman. "It's a good thing, we just need more."