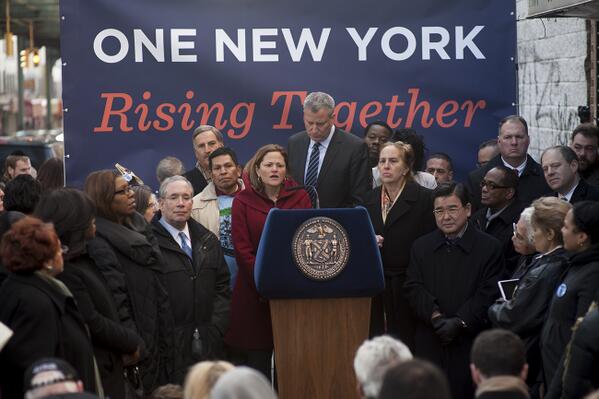 While it is presumed that de Blasio, James, and Stringer will each seek re-election to city-wide office, Mark-Viverito is term-limited out of the Council at the end of 2017 and her future plans are unclear. It is well-documented that Mark-Viverito continues to raise money, readying, perhaps, for a mayoral run somewhere down the line. Both James and Stringer continue to raise funds too, with the comptroller outpacing his colleagues.

Mayor de Blasio has not been fundraising for his re-election campaign, though the account shows quite a bit of spending - instead it appears that the mayor is directing donations toward either the non-profit that he is closely aligned with, Campaign for One New York, and the city's Mayor's Fund for New York City.

All four candidates are subject to New York City Campaign Finance Board rules when it comes to their official campaign accounts. Information about the CFB program and its rules may be found on the CFB website, but one key concept is the contribution limit - a specific donor (individual or institution) may commit to a single politician. Though the limit varies per office, for all four of these officials, that effective limit is $4,950 per donor. When a donor has given this amount, they have "maxed out."

All of the data and charts below include the accumulated filings of July, 2015, for activity from January 1, 2014 through the July filing cut-off date of July 15, 2015. De Blasio has raised no money into his principal campaign account during his time as mayor, and he spends from a "war chest." The other three officials - James, Stringer, and Mark-Viverito - have sought out funds during this term. Popularly elected to citywide positions and assumed mayoral aspirants, Public Advocate James and Comptroller Stringer are both raising money at a significant pace, though Stringer has raised more thus far: 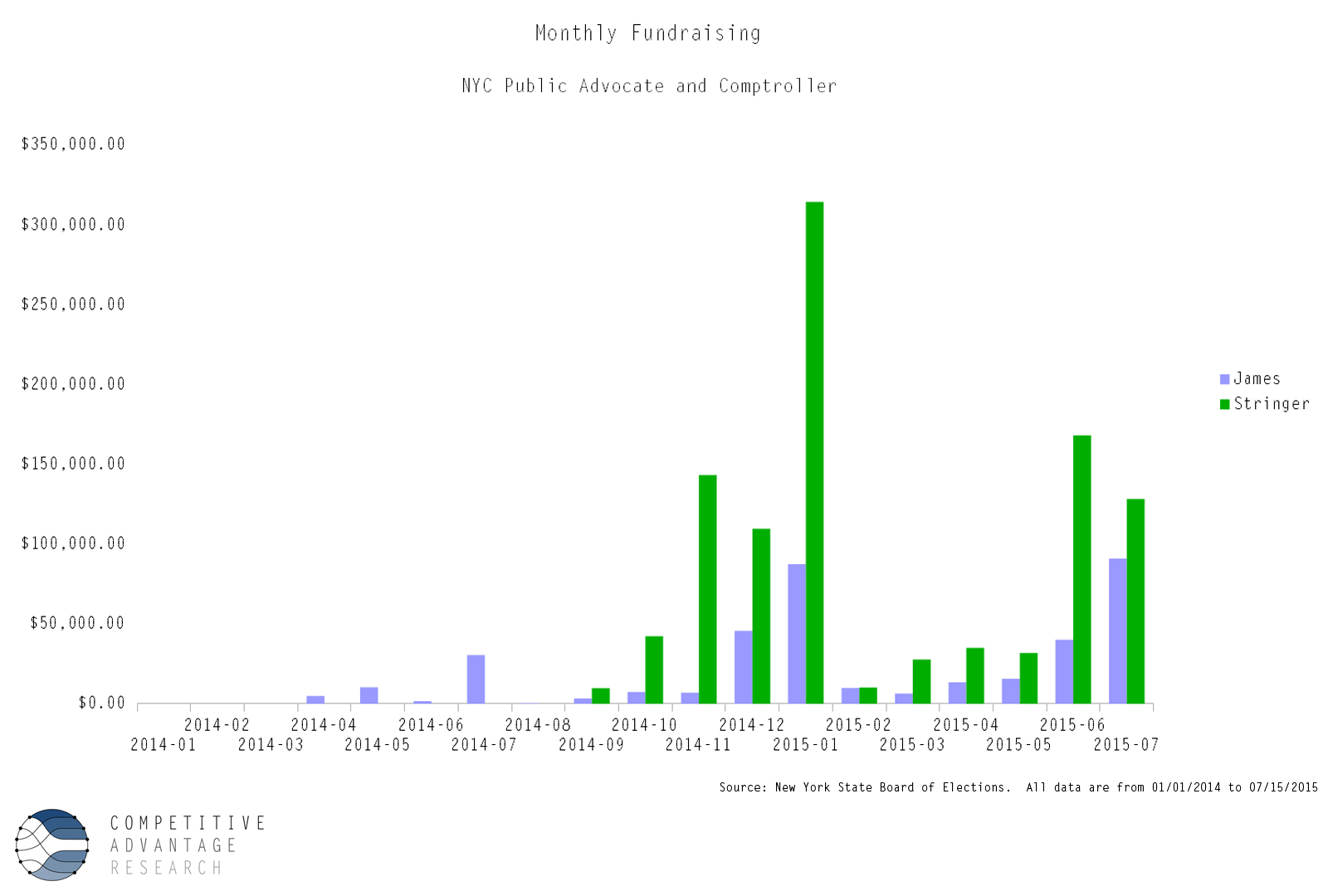 While James and Stringer appear to push their own fundraising performance around the January and July filings, Mark-Viverito had her big month in April (it was reported that she held a birthday fundraiser on April 20): 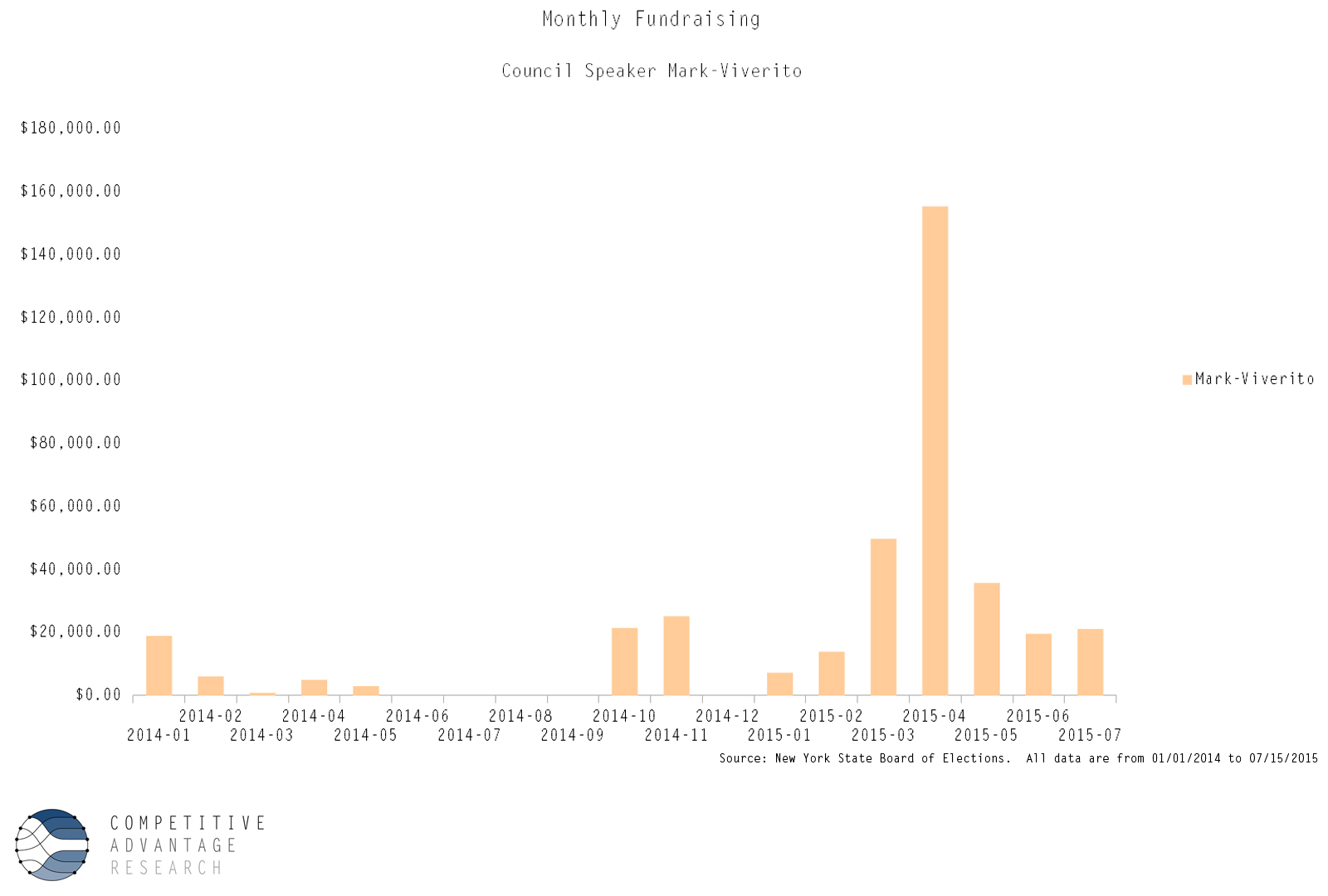 In terms of where the money comes from, James has enjoyed city-wide political financial support since January 2014, but has relatively few links to the Bronx: 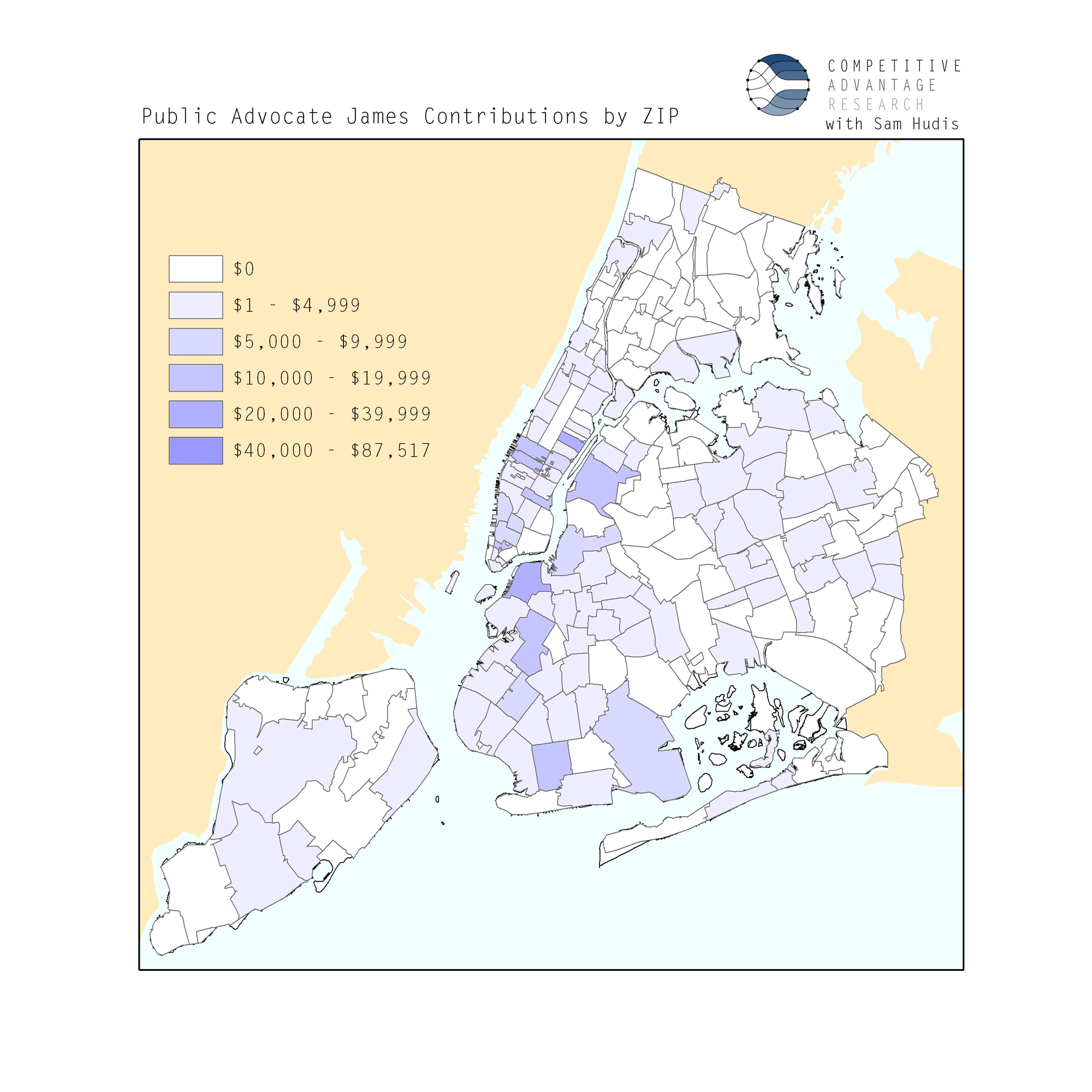 Stringer is heavily reliant on the Upper East Side and his home-turf in the Upper West Side since January 2014: 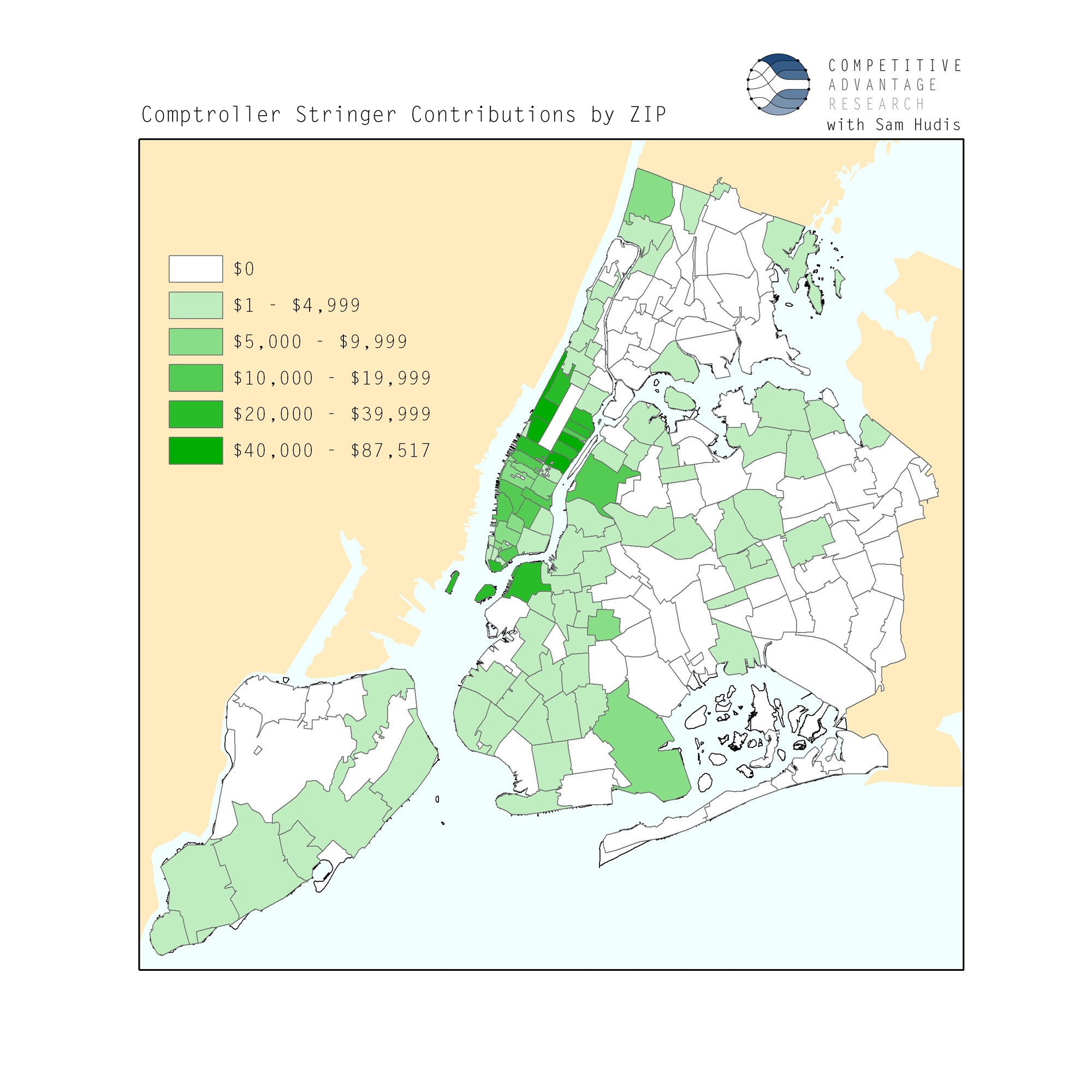 Mark-Viverito's fundraising is Manhattan-centric; though less than $5,000 is from her district - which spans parts of Manhattan and the Bronx - since January 2014: 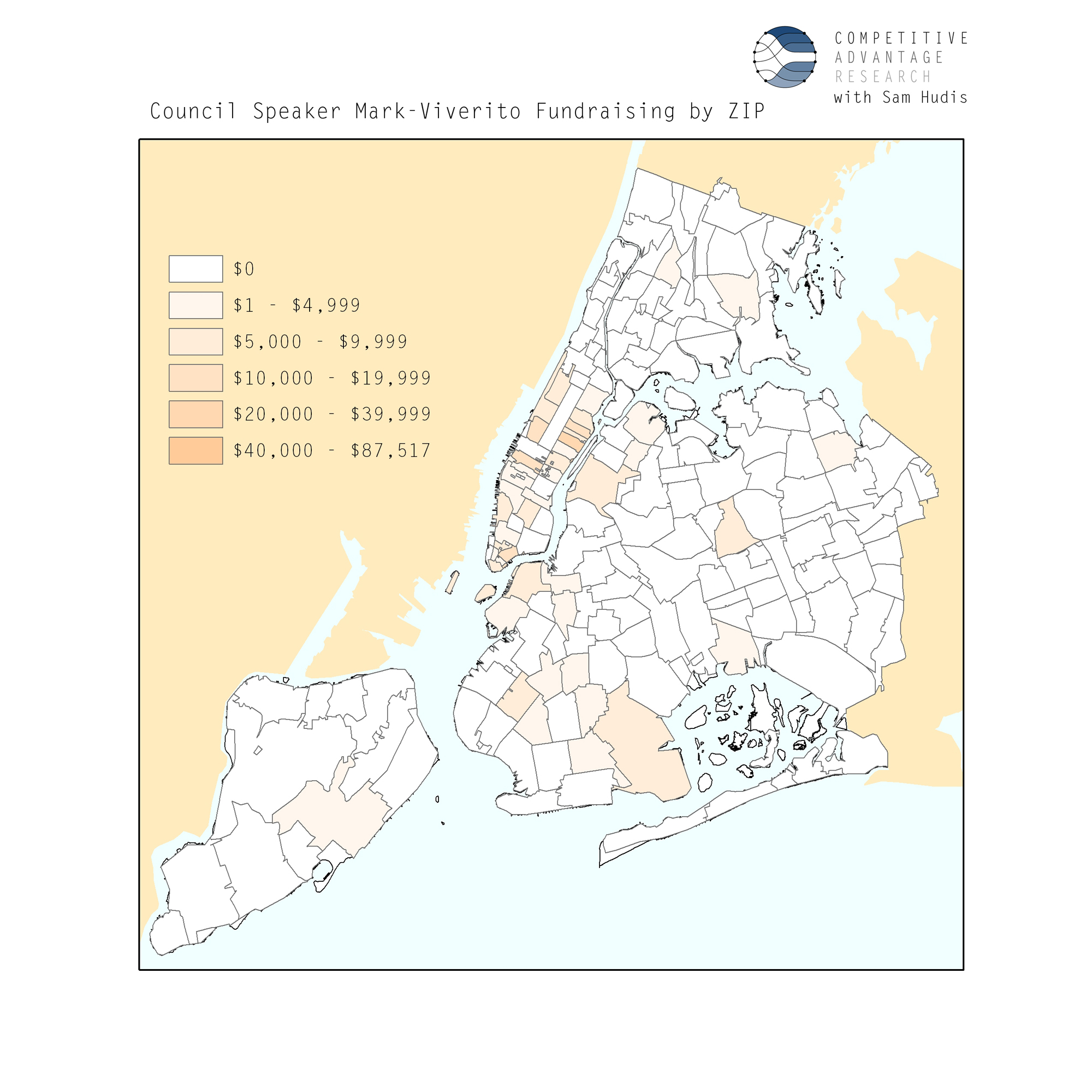 For each of the three (James, Stringer, Mark-Viverito), the share comprised by "maxed-out donors" (everyone who gave $4,950) as part of overall fundraising shows differences in those largest donors. Stringer's fundraising outpaces both of his colleagues by quite a bit, and the portion of his haul made up of max donors is largest. Stringer has about 50% of his raise from max contributors, whereas James is at about 35%, and Mark-Viverito about 20%. 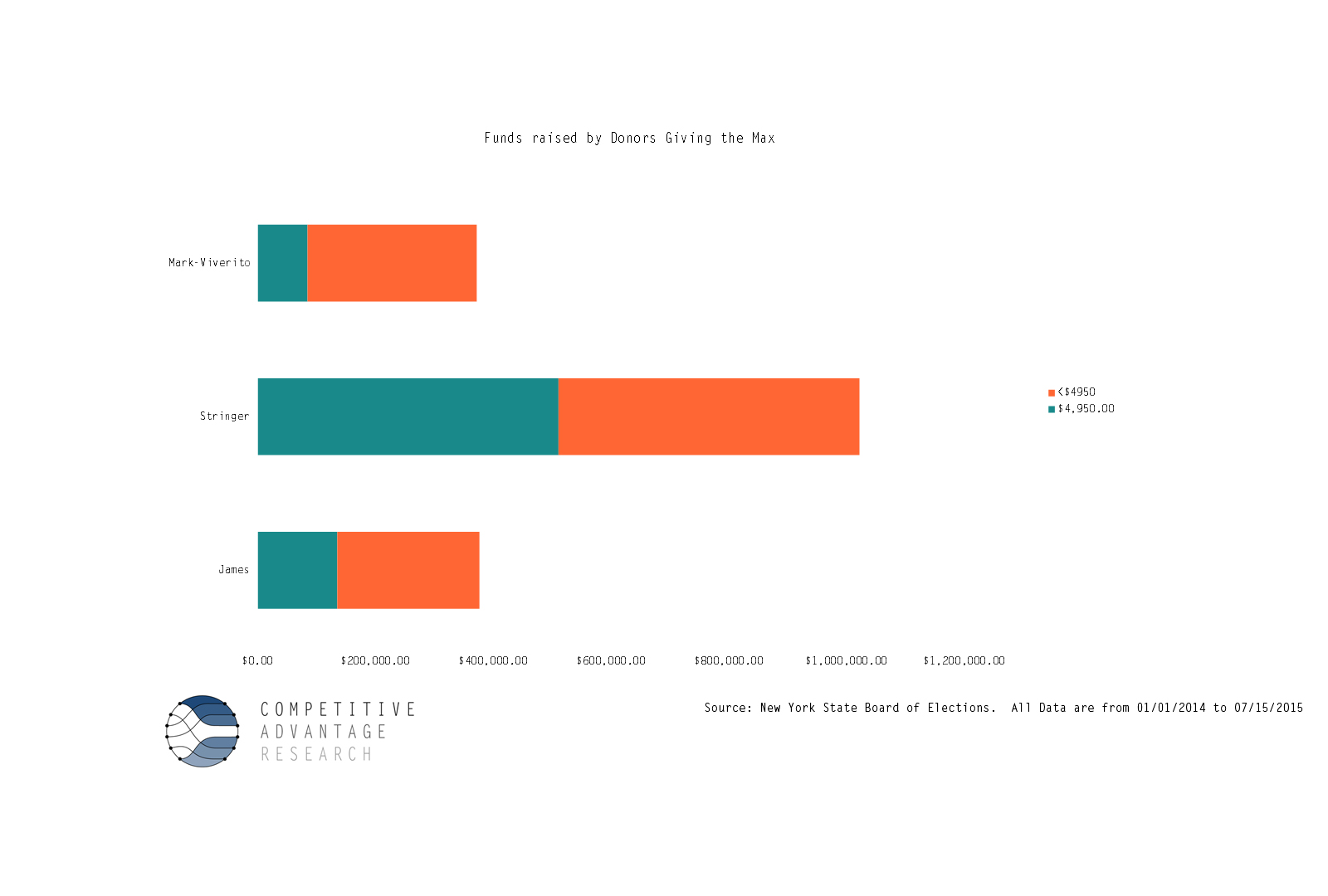 In raw numbers, the maxed-out donors to each of the three - sums and headcount for each segment are shown:

All three officials count a common basket of labor institutions in their max-out club. All three also are in receipt of $4,950 from Greenberg Traurig, LLP as well.

A few individual donors have maxed out for two of these officials:

Campaign finance filings also require disclosure of spending. While the mayor is reticent to raise to his campaign account, he has spent from it. Stringer and James are both spending as well. 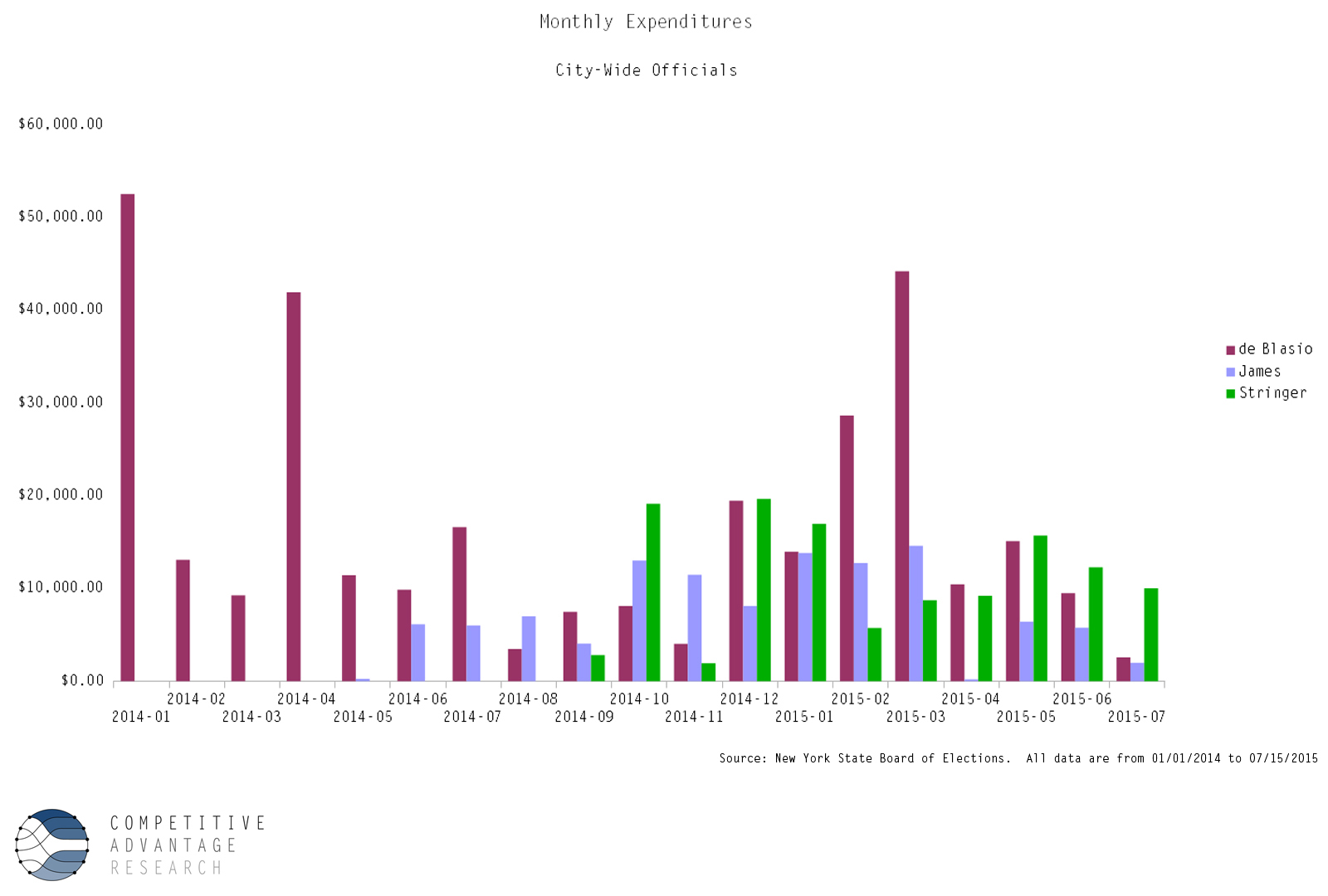 Mark-Viverito's biggest expenditure is on legal services, likely due to combatting allegations regarding her use of a consultancy during the speaker's race. 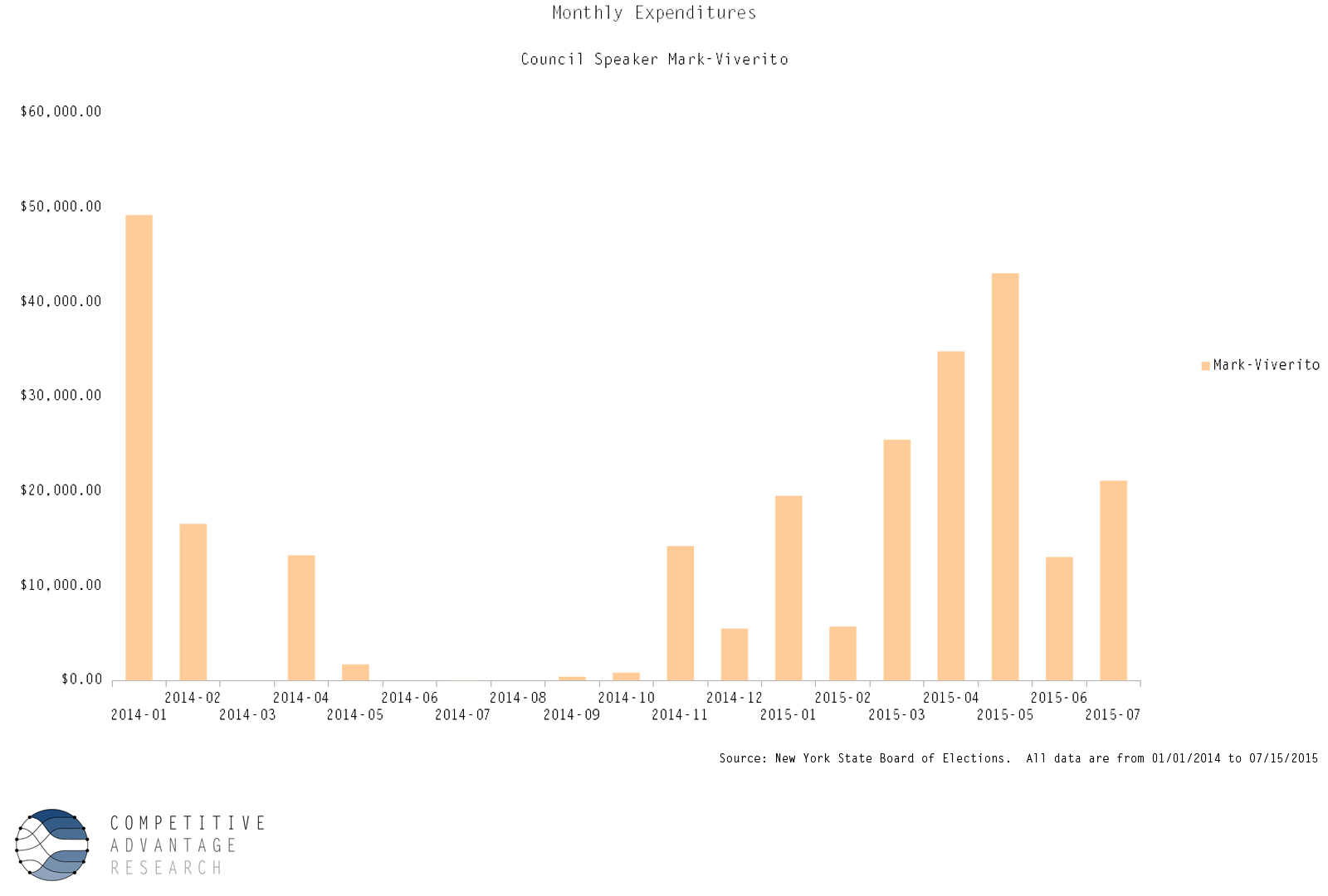 The top expenditures for each campaign - every relationship worth $1,000 or more entered into by these campaigns since January 2014 and through the July 2015 filing - show the bulk of expenditure is directed towards one or two firms that provide consulting and/or legal advice.

De Blasio has Hilltop Public Solutions and Genova Burns; James has Bedford Grove and Mirram Group; Stringer has Tucker Green Consulting and Genova Burns; while Mark-Viverito has Pitta Bishop Del Giorno Giblin and Nashban Mansur LLC. Mark-Viverito's very large payments to Ballard Spahr, meanwhile, are said to be related to the ongoing Conflicts of Interest Board investigation into her speaker's race.

Beneath that, the campaigns pay a small handful of staffers, handle some housekeeping, and some have funded their fund-raising operations to varying degrees. De Blasio's campaign is making substantial payroll payments, including various forms of insurance and taxes as well. In the "count" column we are displaying how many checks each vendor is receiving from its respective campaign, and the "average" column simply performs the division to provide a general sense of the ongoing relationships at play. 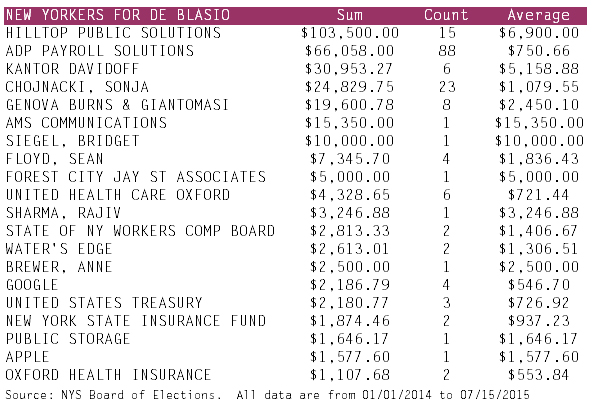 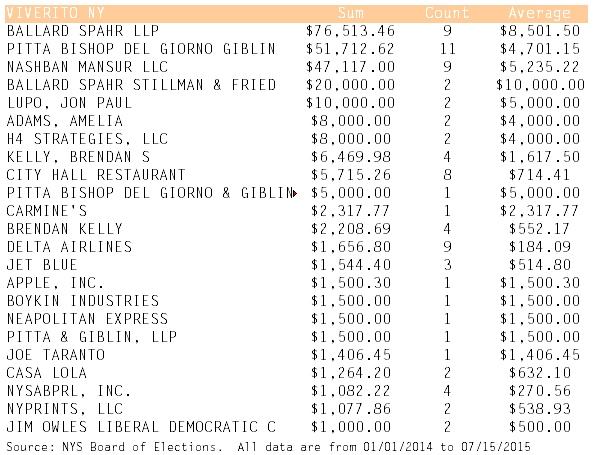 Note: The author has provided paid photo, prior to their current terms, to Stringer and Mark-Viverito, and in-kind photo to James.