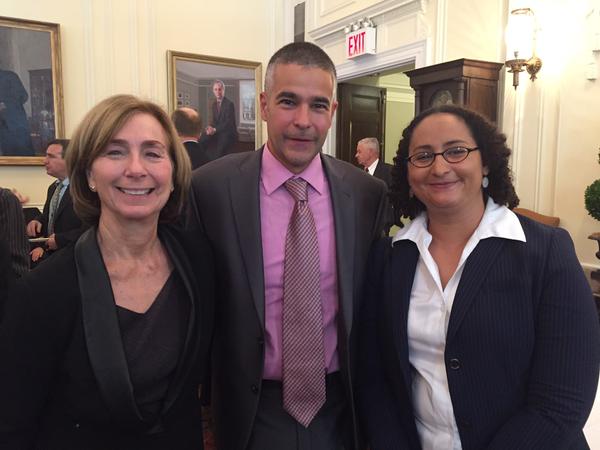 Ninety-six percent of Americans are concerned by the role of money in politics. Ninety-one percent think there's nothing they can do to change it.

Federal Election Commission Chair Ann Ravel presented these statistics during her keynote address at a conference - "American Elections at the Crossroads: How do we restore voters' faith in elections and get them back to the polls?" - focused on changing that cynical sentiment, held by the New York City Campaign Finance Board, the Brennan Center for Justice, and the Committee for Economic Development on Wednesday.

John Mollenkopf, a distinguished professor at the CUNY Graduate Center and the director of its Center for Urban Research began by noting the role of political contributions in spurring people to vote.

"The positive takeaway to begin with is people who contribute are more likely to vote. So clearly the act of contributing is an extension of political engagement, it's something people do on top of bothering to go to the polls and public match really incentivizes people to contribute," Mollenkopf said, referring to New York City's small donor matching program. The Campaign Finance Board matches contributions of up to $175 at a six-to-one ratio for candidates for mayor, comptroller, public advocate, borough president and City Council.

Former U.S. Congressmember Tom Petri of Wisconsin agreed, describing political contributions as a way for people to feel they have a stake in elections, compelling interest particularly in local elections.

"I think sometimes we get too focused on big money in the big elections which are very important, but we should also remember the political process is a huge broad diverse one," Petri said, indicating that their are many municipal level contests that people often forget when focusing on presidential and congressional races.

For New York City Public Advocate Letitia James, campaign contributions from voters are as symbolically important as they are practically.

"When ordinary New Yorkers put their hard earned money into a campaign, they are putting faith in candidates," James said. Citing her modest personal means, the public advocate often points to the necessity of the public matching system in allowing her to compete electorally.

To combat the problem of low voter turnout in municipal and state-wide elections, Mollenkopf emphasized the role of political parties as agents of voter mobilization and suggested a solution that may be unsavory to many in City Hall.

"As strange as it may seem for a person like me who is a long-time Democrat, I think we need a stronger Republican Party in New York City," Mollenkopf said. "We need a party that will go out and contest these elections with candidates who will give the Democrat incumbents who often have no challenge, give them a run for their money, get everybody really involved."

City Council Member Eric Ulrich, a Republican from Queens, agreed with the importance of a two-party system, but "as much as I'd love to see a stronger Republican party, I'm not going to hold my breath anytime soon," he joked.

"One of the reasons voting turnout is so low is that we tell people you can only vote from 6 a.m. to 9 p.m. on a Tuesday," Ulrich said. "And if you can't make it, you can't be a part of the process."

"Money will always be in politics," acknowledged Jared DeMarinis, director of Maryland's State Board of Elections. In Maryland, Montgomery County's campaign finance program, the first in the country passed after Citizens United v. FEC - the Supreme Court decision that lifted restrictions on political spending by corporations - was designed keeping in mind the altered political environment. "Let's not have the hard caps on expenditures," they decided. "Let's just cap how much public monies we'll give to candidates but allow them to keep raising beyond that but just restrict on how the money is raised." Montgomery's program was "basically modelled after the New York City idea," said DeMarinis.

Other parts of the country may be passing campaign finance laws, but not all have been as successful as New York City, according to Michael Malbin of the Campaign Finance Institute. He compared the small donor public matching programs in New York City and Los Angeles and found that "not all matching funds have the same effect." A study he conducted with Michael Parrott found the New York program to be significantly more effective than the one in Los Angeles due to differences in how they are structured, including around what percentage matching funds account for spending limits. "You need a program that will actually work, that will do its job well," he said.

One area in which he found success in both cities was that supporting small donations encouraged political participation among less wealthy and non-white racial and ethnic groups. "In both cities, small donors come from much more diverse neighborhoods than large donors," he said. His study found that New York City Council candidates raised campaign contributions from 90 percent of the city's census block groups. In Los Angeles, the percentage was lower, but still significant at 68 percent.

Currently, efforts are underway to create or strengthen campaign finance laws in several cities and states across the country, including Chicago, Santa Fe, Seattle and Maine, panelists said.

"We have seen an enormous interest in cities and states across the country. And in many places over the next two or three years, we are going to see dozens of jurisdictions looking to move small donor public financing," said Karen Hobert Flynn, senior vice president for strategy and programs at Common Cause. "It's about people wanting to reclaim their government."

"Our hope is that Chicago will mimic what's happening in New York, in Los Angeles, and other places," said Mike Petro, vice president of Committee for Economic Development. "Those are the victories that we need across the country."