PHOTO OF THE WEEK: a Brooklyn street was officially renamed "Do The Right Thing Way," after the iconic Spike Lee movie, via Council Member Jumaane Williams 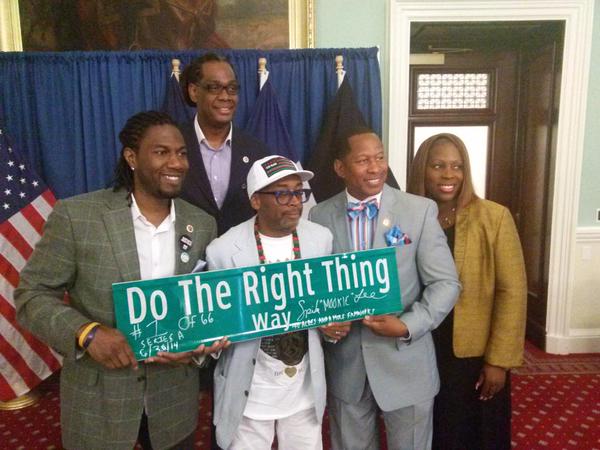 1. Staten Island Standoff: There was a dramatic scene on Staten Island Friday as an individual with a long criminal record set fire to his home and began shooting at firefighters who responded, injuring one. Along standoff ensued, resulting in the apparent suicide of the suspect.

2. State Test Scores: 20% of 3-8 grade students opted out of taking New York State standardized test this year. Districts that fall below 95% participation could face sanctions from state and federal education departments. Opt-out in NYC was just 2%, though, and city students posted small gains on the annual exams, which were in their third year being much tougher and Common Core-aligned.

3. Legionnaires' Update: On Thursday, the City Council passed a bill that requires buildings with cooling towers to conduct quarterly inspections, in an effort to prevent future outbreaks of Legionnaires' disease. Mayor de Blasio has promised to sign the bill into law. The current outbreak is the largest in New York's history with more than 100 cases in the South Bronx, leading to 12 deaths. The outbreak appears to have abated, though, with no new cases diagnosed to have occurred since August 3.

4. Nail Salon Wage Bonds: Governor Cuomo announced that nail salon owners are required to secure a wage bond by October 6, 2015 or incur fines and penalties, which could include closing down the business. The wage bond requirement is part of the reforms Cuomo recently moved related to worker exploitation.

5. New Laws Signed - ADA, Uber, More: Monday, Mayor de Blasio signed a few new bills into law. One bill will show which parks are and are not in full compliance with ADA standards. One much-anticipated "Uber bill" was also signed, it requires the Taxi and Limousine Commission to study and present the impact of the growth in the taxi and for-hire vehicle industries.