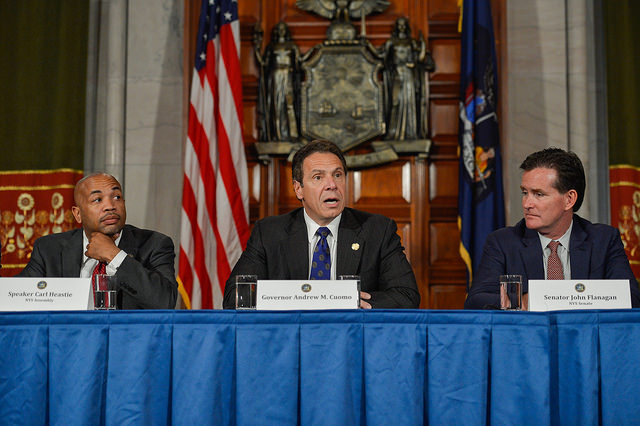 Last week, two former New York State Assembly Democrats were sentenced in federal corruption cases. While the punishment bestowed upon each may warn current lawmakers to toe ethical lines, progress on concrete reforms aimed at curbing the type of behavior that landed William Boyland Jr. and William Scarborough in prison has been slow to materialize.

Boyland Jr., of Brooklyn, received 14 years for taking part in bribery and extortion plots and for defrauding the state of hundreds of thousands of dollars by claiming travel expenses he never incurred. Scarborough, of Queens, was sentenced to 13 months for defrauding the state of at least $40,000 by claiming fraudulent travel expenses. Scarborough pleaded guilty and resigned his seat in May, while Boyland stood trial after refusing a plea deal, and was convicted in March of last year.

"The most powerful message that has been sent to incumbents is that they better be careful because people are actually watching them," said Blair Horner of the New York Public Interest Research Group when asked whether any real action has been taken in Albany to prevent similar cases of corruption.

Regardless of that powerful message, sent by prosecutors, and the many other indictments and convictions of legislators on corruption charges, both houses of the state legislature have yet to make good on ethics reforms agreed to in the Fiscal Year 2016 budget.

Gov. Andrew Cuomo announced in April that both Assembly Speaker Carl Heastie and then-Senate Majority Leader Dean Skelos had agreed to a series of ethics tweaks that included setting new rules for what is required for lawmakers to be reimbursed for their travel and stripping the pensions from public employees who are convicted of felonies. With the legislative session long over, the pension-forfeiture plan is still up in the air, while critics say the per diem requirements set by both houses do little to prevent intentional fraud.

In the 2016 budget - which went into effect April 1, 2015 - the legislature agreed to install an electronic verification system for legislators to prove their presence in the capitol, and according to Cuomo's office, "develop and implement policies to verify attendance at official events and establish standards and limits for reimbursable events."

Assembly Speaker Heastie, a Bronx Democrat who has been one of the top participants in the per diem system, released new regulations for Assembly travel reimbursement this spring, satisfying what had been agreed to in the budget.

In May, Heastie announced new rules for acceptable documentation to prove a member is in Albany when he or she claims per diem expenses. Acceptable forms of documentation now include an electronic recording of a member's vote in committee, session attendance, swiping a machine in the Assembly's Legislative Office Building, EZ Pass documentation, recorded presence at a public hearing, or even dated receipts from hotels and restaurants in the region.

Critics note that the system could easily be gamed by having staffers faking an Assembly member's presence. The system also does nothing to ensure a member is actually doing the people's work while in the area and collecting per diems.

In June, Heastie issued new rules for reimbursement of travel expenses incurred when the legislature is not in session. The rules mandate that legislators seek approval from Heastie's office if they want to be reimbursed for out-of-session trips exceeding 30. Members can receive the full reimbursement rate of $172-a-day for 20 of their 30 allowed trips.

Critics note the rules for out-of-session travel aren't exactly strict. "The overwhelming majority of the members of the Assembly are men and women of integrity and honor and these new rules will reflect our house's commitment to the highest standards of accountability for the public resources entrusted in us," Heastie said in a statement announcing the new rules in June.

"This stuff makes it less likely people will make dumb mistakes," said Horner. "But when you look at those two cases, it seems like Scarborough may have just made some dumb mistakes, while Boyland concocted an elaborate scheme, and these changes won't do anything to stop someone who puts effort into defrauding the state."

Some legislators have been caught using campaign funds to pay for travel and then having the state reimburse them for the same expenses. John Kaehny of good government group Reinvent Albany said that there are fairly straightforward ways to prevent any sort of double-dipping. Kaehny suggests ending reimbursements altogether and simply providing legislators with a per diem expense card. "The card would simply stop working if per diems are exceeded," said Kaehny.

Kaehny said he would also like to see all per diem data sent directly to the Joint Commission on Public Ethics (JCOPE) and format per diem expenditure reports in a way that they could be directly compared to campaign expenses so that double-dipping could be easily identified.

Attorney General Eric Schneiderman, a Democrat, has also advocated ending per diems altogether. "Legislators should be reimbursed for their actual costs of travel. Total reimbursements should be capped. And that should be it," Schneiderman said during a speech in March.

Schneiderman has also called for sweeping campaign finance and ethics reforms, including term-limits for state legislators, and said he is done with small tweaks, though even those seemingly smaller moves seem difficult to get implemented.

Pensions
Senate Republicans acted first on the pension forfeiture measure that was agreed to in the budget. They passed a constitutional amendment that would have stripped the pensions of public employees who commit felonies. Assembly Democrats did not act in kind. Facing pressure from unions and some elected officials, the Assembly stalled and then eventually introduced an amended bill that strictly defines which public and appointed officials could have their pensions stripped.

Republicans balked at the Assembly version and both houses left town with no resolution to the issue.

Assembly Minority Leader Brian Kolb railed against the Assembly Majority's stance on the pension-forfeiture bill during last session. He has long-advocated a host of reforms that are unlikely to see the light of day in the Assembly.

"With two former Assemblymen headed to prison, we are reminded that Albany's corruption problem isn't going to fix itself," Kolb said in a statement to Gotham Gazette. "Assembly Republicans have pushed for pension forfeitures, term limits for leadership positions, a new independent public ethics committee – but our efforts have been blocked by Democrats each time. In March, Assembly Democrats walked away from an agreed-upon pension forfeiture bill, and came back in the last days of session with a weaker version they knew would never become law. Their actions demonstrate a lack of courage and complete refusal to address the corruption issue. The allegiance to the status quo is what prevents real reform from taking place at the Capitol."