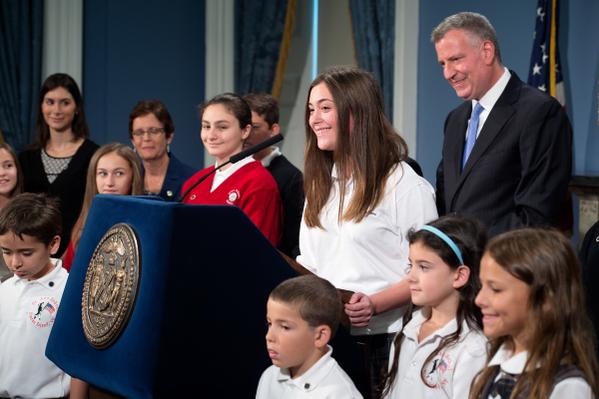 The expansion of public educational programs to enhance the traditional school system and combat rising inequality has been a signature of the de Blasio administration.

Yet, while over 65,000 four-year-olds are now enrolled in pre-K and more than 100,000 middle schoolers in after-school programs, there remains a glaring gap in the availability of after-school offerings for elementary school students. A recent survey by the Campaign for Children, a coalition of 150 educational advocate groups, shows the need in stark figures.

A report based on the survey, an advance copy of which was shared with Gotham Gazette, shows that 88 percent of the 83 elementary school programs surveyed have waitlists, with an average waitlist of 38 percent of capacity. Some lists reach as high 357 spots while others cap waitlists at 30 or 50 due to very low drop out rates.

"The City's significant investment in programs for middle school students has been a major success," said Stephanie Gendell, Associate Executive Director for Policy and Government Relations at Citizens' Committee for Children and a member of the Campaign for Children. "But given the high percentage of programs reporting waitlists, after-school should be extended to the families of children at all grade levels, all year long."

Mayor de Blasio acknowledges the importance of extended-day programming and has touted his expansion of middle-school after-school.

"After-school is such a huge difference-maker," de Blasio said during a press conference to announce increased funding for additional middle school after-school programs. "It extends the learning day, provides an enrichment that is not there without it, keeps kids safe and sound, helps kids to the right path, including a lot of young people at the middle school level, where we're focused, who might be tempted by some of the negative dynamics around them."

When told of the Campaign for Children survey, a representative of the de Blasio administration stressed its commitment to expanding after-school offerings. "Providing as many young people as possible with free, safe and high-quality afterschool programs is one of this administration's top priorities," said Mark Zustovich, a spokesman for the New York City Department of Youth and Community Development.

"This year, the City's unprecedented expansion of middle school programming means that 106,000 students in sixth through eighth grades will be served during a very critical time in their development," Zustovich said.

The de Blasio administration has indicated no elementary after-school expansion plans as of yet.

The after-school system is comprised of three components. COMPASS, or Comprehensive After-School System of New York, which has been the major focus of de Blasio's expansion and offers expanded educational opportunities in arts and sciences as well as activities to keep children engaged and active. Beacon Community Centers use schools as hubs for community-based programing like physical and mental health services, English as a second language (ESL) classes, and traditional after-school activities. And, Cornerstone Community Centers operate out of NYCHA facilities and are focused on families within the surrounding housing complexes.

Demand for after-school enrollment far outweighs supply. Yamayra Lopez, a 40-year-old insurance broker in the Bronx and mother of two, said enrolling her daughter in an elementary level after-school program was a stressful endeavor to say the least.

"In order to make sure she had a spot, I had to leave work early to meet deadlines and hand in paperwork," she said. "There were hundreds of people waiting in a line that stretched around the block. A lot of parents were left out."

Aside from the intellectual and social benefits for students in after-school programs, they also provide financial relief for low-income families. Parents are able to work or work more hours, and to save on childcare costs.

The Campaign for Children surveyed 2,500 parents who currently enroll their children in after-school programs – 268 from the Bronx, 453 from Brooklyn, 279 from Manhattan, 428 from Queens and 48 from Staten Island.

"I can't afford to leave work early to be with her everyday," Yamayra Lopez said of her daughter. "These programs were where she could build a foundation to transition into a well-adjusted person. She came out with a wealth of knowledge. I am eternally grateful."