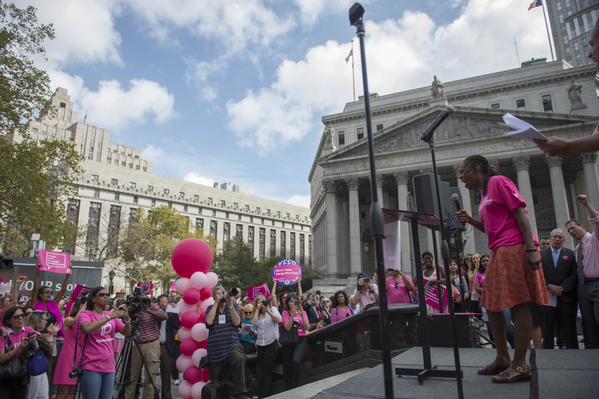 In the face of federal debate and brinksmanship over funding for Planned Parenthood, many in New York City have doubled down on support for the women's health care organization.

In the past month, the city has seen the opening of a Planned Parenthood health center in Queens (expanding the organization's presence into all five boroughs), two large rallies during which numerous elected officials championed the importance of Planned Parenthood’s health care services, and one leading Assembly Democrat calling for the state to boost its financial support for the clinics if conservatives in Congress were to cut off the organization's federal funding.

On Wednesday, Congress avoided a government shutdown by passing a temporary spending bill that will keep federal agencies operating through December 11. The threat of a potential shutdown over funding of Planned Parenthood loomed for weeks, spurred by the release of secretly filmed videos this summer which showed Planned Parenthood officials casually discussing the preservation of fetal tissue for medical research.

The Center for Medical Progress, the anti-abortion group that filmed the videos, claims that they show Planned Parenthood officials discussing the illegal sale of aborted fetal tissue. The videos have prompted an ongoing investigation by Congress into Planned Parenthood’s practice of donating fetal tissue for medical research. A forensic analysis of the videos commissioned by Planned Parenthood found evidence of manipulation, "intentionally deceptive edits, missing footage, and inaccurately transcribed conversations," according to Politico, which obtained a copy of the report.

Four states - Alabama, Arkansas, Louisiana, and Utah - have ordered state agencies to cut off federal funding to local Planned Parenthood chapters, leading those branches to file lawsuits. According to the Associated Press, in court documents, the Utah branch said the governor's decision to cut off funding is based solely on unproven allegations that took place in other states, by other arms of the national group.

New York City government sends approximately $850,000 a year to the city’s central Planned Parenthood branch in the forms of various grants, namely for health care services and sex education, according to an official from PPNYC. The city also allocates capital awards to Planned Parenthood each year, which have ranged from $75,000 to $400,000.

Malin explained that Planned Parenthood New York’s funding comes from a combination of “private donors, public funding from the city, state, and federal government,” and an endowment, “but for our patient services, we rely overwhelmingly on Medicaid and Title X family-planning grants, which allows us to provide services for anyone who needs our care regardless of their ability to pay. Out of a $44 million budget, $9 million is federal funding. If that were to go away we would be sorely challenged to continue to provide our services."

Mark-Viverito, joined on stage at Tuesday’s “Pink Out NYC” rally by fellow Council Members Helen Rosenthal and Brad Lander, said, "We are proud as Council members to ensure that we direct your taxpayer dollars and invest your taxpayer dollars in Planned Parenthood, to make sure that they are able to provide vital services throughout the City of New York. We expect the federal government to continue to do the same thing."

The rally on Tuesday in lower Manhattan was one of nearly 300 events held in 90 cities across the country in support of Planned Parenthood’s work, organized as negotiations continued in Washington, D.C.

"Congress should be ashamed!" New York City First Lady Chirlane McCray shouted to the crowd of some 500 pink-clad supporters, just hours before it was announced that government funding would be extended until mid-December. "Congress should be ashamed to punish women who have no other health care options. I know firsthand that Planned Parenthood provides excellent services!"

"Our bodies will not be used as an organizing strategy for the right," Public Advocate James shouted, eliciting cheers from the crowd. "This is nothing more than a distraction from the issues that we care about — a need to educate girls, a need to end income inequality, and a need to end poverty in this country."

When asked what might happen next for Planned Parenthood, even with a temporary compromise in Washington, PPNYC CEO Malin replied, "This issue is going to remain in the public discussion, unfortunately. As all of our speakers said, there are so many issues that we need to be talking about - greater access to health care, immigrant reform, Black Lives Matter - there's so many issues we need to be talking about. Focusing on reproductive health care is important, but the way [opponents are] talking about it is a distraction. I would say that that distraction is going to continue throughout this election, and Republicans are going to look for ways to keep this issue at the forefront."

Not all Republicans are looking to keep the issue of defunding Planned Parenthood in the spotlight, however. Republican strategist and president of Somm Consulting, Evan Siegfried, told Gotham Gazette, “Until we know what the facts are, the calls to defund are premature.”

Congressional investigation is ongoing, and as analysis of the incendiary videos showed the footage had been drastically altered, Planned Parenthood Federation of America CEO Cecile Richards testified before Congress just this Tuesday. Richards defended the $450 million in federal funding that goes to Planned Parenthood, explaining that 87 percent of it comes from Medicaid and Title X family planning monies. “We, like other Medicaid providers, we are reimbursed directly for services provided,” she said.

“No federal funds pay for abortion services, except in the very limited circumstances allowed by law. These are when the woman has been raped, has been the victim of incest, or when her life is endangered,” Richards explained (abortions account for just three percent of Planned Parenthood’s services nationally, according to the organization’s most recent report).

Hard-line conservatives like Texas Senator and Republican presidential candidate Ted Cruz are committed to defunding Planned Parenthood to the point that they would rather plot to shut down the government than allow the organization to continue its work through federal funding.

Cruz recently decried the state of his divided party, saying that the more socially liberal Republicans, specifically the “New York billionaire” donors who insist candidates are pro-choice, hate the base and hold the party back from really fighting on key social issues. It’s part of the intra-Republican conflict that led to House Speaker John Boehner’s recent resignation announcement.

Speaking anonymously with Gotham Gazette, New York Republicans have indeed expressed frustration with the far right wing of their party, with one saying it is “on a crazy quest that will kill [Republicans] with the swing voters in 2016.”