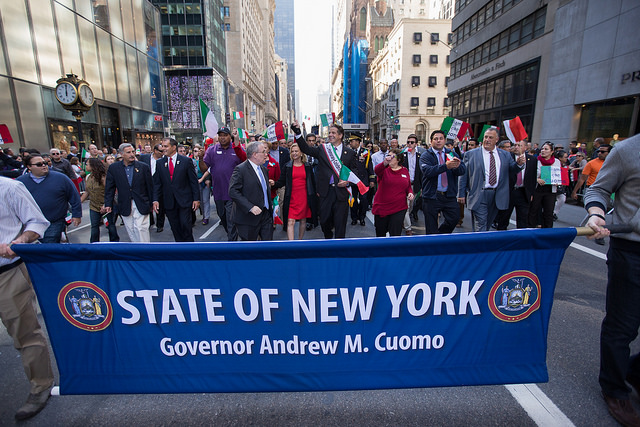 The governor's office, on the march (photo: Governor's Office via flickr)

The 2011 law that created the Joint Commission on Public Ethics (JCOPE) to be the top ethics watchdog in the state contained a proviso that the body would be periodically reviewed to find ways to improve its functioning. That mandate fell upon the New York Ethics Review Commission, more commonly known as the JCOPE review commission, which held its first-ever public hearing on Wednesday at New York Law School in downtown Manhattan.

The forum was sparsely attended with barely 20 people in the audience including legal experts and good government advocates who suggested ways that JCOPE could become a stronger, more efficient oversight entity. Their recommendations, though diverse, centered on a few core issues that plague JCOPE: the extent of its jurisdiction; the protocol of appointments; transparency in its internal functioning; and its online resources.

The review commission is comprised of eight unpaid volunteers, six of whom were at Wednesday's meeting. The hearing was in part held as the commission works toward preparing a report due by November 1, though that deadline appears fungible. Commission chair and former state Senator Dale Volker, stated at the outset that the review body's mission is to be an advisory charged with reviewing and evaluating the performance of JCOPE and the legislative review commission.

"We're looking at how well they're performing under current law as it's written and not to redefine the scope of what these bodies are charged with doing or establish new regulatory structure," he said.

Unfortunately for them, and perhaps New Yorkers, this mandate precludes the major recommendations made by Evan Davis and Dan Karson, members of the New York City Bar Association's Government Ethics Committee. They presented a joint report by the City Bar and good government group Common Cause New York titled "Hope for JCOPE."

Davis made it a point to say that the JCOPE commissioners are "very good people who all want to do the right thing and our disagreement with them is about what is the right thing in the circumstances presented today." With hypothetical ethics lessons, he tried to illustrate the legal technicalities and grey areas which JCOPE could address.

Karson focused on JCOPE's controversial appointment process. Of the 14-member commission, eight members are legislative appointees and six are gubernatorial - members come via the very entities which fall under the commission's purview.

"By its very design, the legislation for JCOPE provides that appointments will be made along party lines and in reality precludes membership other than by the two major political parties," said Karson. "Political party affiliation can prevent, effectively, JCOPE in conducting an independent investigation."

He emphasized that the structure and rules of the body allow micro-minorities of two or three members to veto decisions to initiate official investigations into members of legislature, legislative employees and candidates.

"The fact that the party leaders name eight members and political affiliation is a specific qualifier in the gubernatorial appointments creates the appearance of political influence and partisanship," he said.

Karson said there should be firewalls between JCOPE commissioners and public officials who appoint them to prevent any communication. He also specifically addressed the issue of self-dealing by legislators through state-funded non-profit organizations, insisting that JCOPE publish lists of these organizations and prohibit any involvement by legislators, their staff and immediate families.

JCOPE's independence, or lack thereof, was also the focus of testimony by Talia Werber, policy and research manager at Citizens Union, a good government advocacy organization.

Werber submitted a number of recommendations for the commission on two fronts: operational management and legislative changes.

Werber also reiterated Karson's concern over the structure of the commission, calling for a seven- or nine-member body with a reformed appointment process similar to that of nomination and selection of appeals court judges.

"I sometimes think of JCOPE as being like a puppy who's so busy yapping at passersby that when the burglar walks in the front door, it's too tired to do anything about it," she said at the hearing.

JCOPE Has been notoriously quiet in terms of exposing high-ranking corruption or major governmental malpractice, even while the drip of indictments by the U.S. Attorney's office continues.

Abel recommended changes to the lobbying disclosure process that would make the commission's job more efficient and make it easier for small lobbying groups to follow the rules.

Part of JCOPE's responsibility is to publicly provide the data it collects. However, it hasn't used the resources at its disposal to do this in the most efficient way. Prudence Katze, research and policy Manager at Common Cause New York, said JCOPE's website is "confusing" and "clunky" and that it needs to be more proactive in rulemaking to "facilitate easier reporting for lobbying entities but also make the data easier to understand."

"JCOPE has the power to shift the pattern of corruption in albany by becoming a proactive force but only if everyone understands the rules and consequences," she said.

In a strange turn of events, the meeting temporarily went off track with the testimony of Elena Sassower, co-founder and director of the Center for Judicial Accountability, Inc. which she described as a non-partisan, non-profit citizens organization focused on New York's "pervasively corrupt" judiciary which is "actively abetted by the executive and legislative branches."

Sassower directed a scathing attack at both JCOPE and the review commission itself in a testimony that devolved into finger-pointing and heated words exchanged with review commission chair Volker. Sassower called JCOPE and legislative ethics commission "corrupt facades" that have protected their appointing authorities from investigation.

She questioned the review commission's methodology and the protocol of dealing with conflicts of interest, stating that they were "unlawfully constituted" and should shut down.

A salient, simple point she raised was that the JCOPE review commission's website is not easy to find since the name changed to the New York Ethics Review Commission.

Although Volker said the commission would not field questions or give responses, Sassower's testimony solicited a defense. He critiqued her for giving false testimony in the past (to which she responded she had never done so intentionally) and that she was simply repeating testimony that was not relevant to the review commission's mandate.

"Our job is not to condemn JCOPE but is to recommend possible change," Volker said.

As the meeting wound down, Volker said the entire panel would meet next week and that they hope to have their report ready by November 1. (Sassower kept volleying parting shots as they left their chairs.)

Although there were no members of JCOPE itself present at the hearing, JCOPE external affairs director Walter McClure said in an email, "JCOPE looks forward to the report of the Ethics Review Commission, which we hope will take into consideration the recommendations made in our February 2015 report."