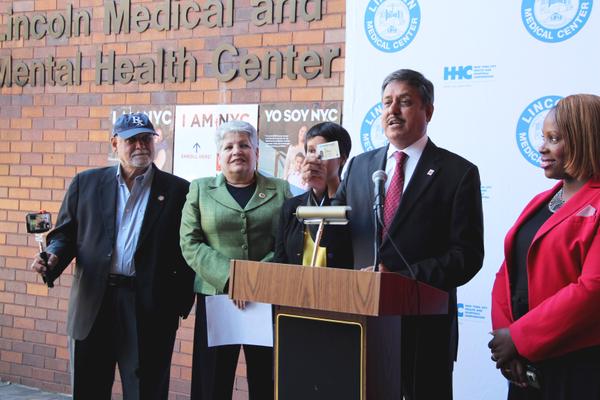 New York City’s Health and Hospitals Corporation was thrust into the spotlight a year ago when, last October, its Bellevue Hospital treated Craig Spencer, the doctor who returned from West Africa with Ebola. But every day, HHC also serves many thousands of New Yorkers, some of them uninsured or undocumented. The quasi-public agency is one of the largest, yet perhaps least-understood parts of New York municipal government.

HHC plays a key role in providing New Yorkers health care, but it has operated on shaky financial footing and its current CEO, Dr. Ram Raju, who is appointed by the mayor, is overhauling its operations. This change comes at a critical time as insurance payment models, federal funding, and city residents’ needs are all changing.

What is HHC?
HHC is a public-benefit corporation—similar to the MTA (Metropolitan Transportation Authority)—that runs the largest public hospital system in the United States. Consisting of 11 hospitals in four of New York City’s five boroughs, HHC treats around 1.4 million patients per year, according to its 2014 Report to the Community. HHC also administers MetroPlus, a low-cost health insurance program open to New York City residents.

As a “safety-net” hospital whose stated goal is to provide healthcare “regardless of ability to pay,” around 80 percent of HHC patients are Medicare or Medicaid recipients, or uninsured. The system also serves the estimated 500,000 undocumented immigrants—of which 200,000 are undocumented and uninsured, according to the New York Immigration Coalition—living in New York City.

“De facto, it serves a lot of very vulnerable patients in New York, in very high volume,” said Andrea Cohen, senior vice president for program at the United Hospital Fund, a healthcare research and advocacy nonprofit. “What it does today is provide an essential safety net.”

HHC was formed in 1969 to take over the city’s former Department of Hospitals. According to James Colgrove, a sociomedical sciences professor at Columbia, HHC was created partly in response to a perceived cost crisis earlier in the decade. With its own - albeit mayor-appointed - board of directors, HHC has “more bureaucratic flexibility and cost controls” than regular city agencies, Colgrove said. This means that HHC is more independant—both organizationally and financially—and less affected by changes in city policies and finances than typical city agencies.

The corporation’s budget in fiscal year 2016, which began July 1, is projected to be nearly $6.5 billion—of which only $215 million, or 3 percent, will come directly from the city. But with operational independence comes financial challenges--HHC projects an operating loss of more than $750 million in 2016, growing to $1.5 billion in 2019.

Ongoing and New Challenges
According to HHC’s preliminary 2016 budget, the corporation’s past and projected deficits are due to years of New York State Medicaid cuts combined with growing patient numbers. In 2014, more than 80 percent of HHC’s revenues were been from Medicaid- or Medicare-related fees. The remainder comes from non-Medicaid or Medicare fees and a variety of federal, state, and city grants.

President Barack Obama’s Affordable Care Act also includes reductions in Medicare and Disproportionate Share Hospital (DSH) funds—a form of supplemental Medicaid given to hospitals that serve large numbers of uninsured patients. The rationale behind these cuts is that with a smaller number of Americans uninsured, hospitals will not need as much federal funding—but that doesn’t mean HHC will benefit in the short-term. The corporation received $1.8 billion in DSH money in 2014—more than 27 percent of its intake that year—while it expects to only receive $1.2 billion by 2018.

HHC’s current financial situation isn’t new or surprising. That’s partly because it’s politically difficult to reorganize or close hospitals, institutions with large union staffs and high levels of community involvement. While running for mayor, de Blasio campaigned against the planned closing of Long Island College Hospital in Brooklyn. Former Mayor Ed Koch’s decision to close HHC’s Sydenham Hospital in 1980, as part of an attempt to close a budget deficit, sparked protests across Harlem. “Concerns over cost are as old as hospitals themselves,” Colgrove said.

Debt-rating agency Fitch affirmed its ‘A-plus’ score on HHC bonds in February, saying HHC’s role as a safety-net provider positions it “well to secure sufficient levels of funding from city, state, and federal sources necessary to continue to operate and pay debt service.”

What lies ahead for HHC?
Raju, appointed by de Blasio at the start of 2014, announced in September plans to restructure HHC’s corporate hierarchy with the goal of ultimately expanding services and growing revenues. The plan came five months after Raju outlined his vision for a financially stable HHC by 2020.

Raju’s plan is to replace HHC’s current structure of hospitals in a network with an organization based on lines of service. The new hierarchy will reduce bureaucracy and allow ambulatory and post-acute services to grow more quickly over the coming years, Raju told Politico New York last month.

“[HHC] has had a deficit for a long time, but it has always found new ways to restructure,” Cohen said. “Dr. Raju’s strategy is growth, and it’s a very ambitious and positive strategy.” New payment models in healthcare, she added, “allow strategies which don’t just look at the cost side but caring for the full patient.”

Another part of Raju’s goal for 2020 is to expand HHC’s MetroPlus insurance membership to 1 million—an additional potential source of revenue. Although MetroPlus was the most popular plan on New York’s health insurance market in 2014 and more than 428,000 individuals were enrolled in 2015, that’s only a 7 percent increase compared to 2010.

“The whole system is really undergoing substantial transformation, and HHC has absolutely embraced it in a huge way, but it’s hard,” Cohen said. “There is execution risk, but they are ambitiously tackling it.”