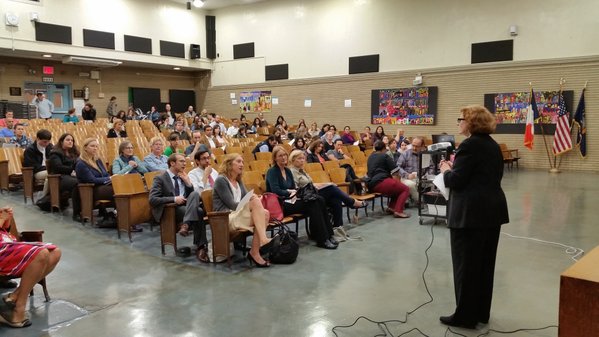 As rezoning problems plague some city school districts, leaders in one area of Brooklyn are looking to avoid similar pitfalls while reducing overcrowding.

In Carroll Gardens last week, local officials and parents gathered in the PS 58 auditorium to discuss overcrowding issues facing three elementary schools. Like others across the city, District 15 - which includes the schools at hand, PS 58, PS 32, and PS 29 - is facing challenges around booming development and school-aged populations, school crowding and zoning.

Wednesday’s forum, featuring several area elected officials, school leaders, and moderated by Professor David Bloomfield of CUNY, was an attempt to get ahead of these issues.

“Often when we’re dealing with overcrowding, we’re not able to address it until it’s a full-blown crisis,” said Paige Bellenbaum, a local district leader. A parent of second- and third-graders at PS 58, Bellenbaum noted that since 2005, the school’s enrollment has more than doubled.

Bellenbaum and other concerned residents heard from and spoke to a panel of elected and appointed decision-makers. The panel included local lawmakers, Department of Education (DOE) planning officials, the School Construction Authority (SCA) external affairs director, PTA parents with rezoning experience, and others.

Amid unprecedented growth and development in District 15 - which contains Cobble Hill, Carroll Gardens, Park Slope, and Sunset Park schools - those who spoke cited the need to “work together in advance to get ahead of the curve,” as Assemblymember Jo Anne Simon put it. City Council Member Brad Lander and State Senator Daniel Squadron, also co-organizers of the event, expressed a similar point.

As the district looks to the DOE and SCA to add capacity and rezone neighborhoods, anxiety is high. Local officials organized the forum to begin a dialogue earlier than has occurred in other places facing similar issues.

In District 15, the average utilization rate for classrooms is already 111.5 percent. PS 58, its principal explained, has been forced to cap entry into third and fourth grades. “In 2005, enrollment was about 400 students. In 2015, it was 996,” Bellenbaum said.

Recently, overcrowding-caused rezonings of four district schools last year and the 2012 rezoning of two Park Slope schools have caused controversy. Perhaps compounding anxiety about rezonings are the current uproars concerning PS 8 and PS 307 in downtown Brooklyn and PS 191 and PS 199 on the Upper West Side. PTA parents from other public schools that had experienced the rezoning process gave advice to parents from District 15 at last week’s forum.

Kim Glickman, co-president of the PS 8 PTA, offered her advice to District 15 parents on participating in school rezoning processes. “As leaders of your own schools, you need to be able to understand what the triggers causing the school to be overcrowded are and to be able to speak to them clearly,” Glickman said.

Because race and class lines are not as sharply drawn around the three District 15 schools as they are in the other aforementioned school pairings, it is unlikely that a rezoning dispute in the neighborhoods will be the kind of “gentrification battle” seen elsewhere. PS 58, PS 32, and PS 29 were also all deemed either “good standing” or “reward” status by the DOE in its assessment after the 2013-2014 school year.

Still, school district rezonings almost always leave some parents frustrated as their home zones are changed and their children are assigned to different elementary schools than they had planned.

Although overcrowding has not yet reached a crisis level in District 15, it has had a corrosive effect on its schools, speakers at the forum said. And, given the scale of development happening in the district - the Lightstone Group’s 700-unit residential complex is being built in the PS 32 zone, for example - the creation of many more school seats will be necessary to accommodate all of the students it will likely receive. Already, PS 32 has been using trailers in its rear yard for about fifteen years because of overcrowding.

The Lightstone building students (“200-ish” of whom will eventually go to PS 32, according to Council Member Lander) will get seats in the school. A 436-seat annex will be added to the school, Lander and CSA officials recently announced.

“So, it’s good that we’re building 400-plus seats,” Lander told community stakeholders. “But it does speak to the fact that it won’t create enough new capacity to solve our problems collectively.”

The annex is also not slated to be completed for a few more years, at which time the rezoning conversation will be at the forefront as officials determine which students are assigned to the new seats.

As Community Education Council 15 President Naila Rosario explained with a powerpoint, overcrowding is already having negative effects, including the elimination of enrichment programs, worse building maintenance, and the loss of rooms for art, music, and special services.

Though overcrowding appears in many ways as an inevitable result of more people moving into a neighborhood, it is perfectly preventable, according to Leonie Haimson of Class Size Matters, a nonprofit advocacy group. Haimson, who was at last week’s forum and frequently speaks to school capacity issues, says policymakers can take concrete steps to keep overcrowding from happening.

“The median utilization rate for elementary schools is over a hundred percent across the city,” Haimson told Gotham Gazette. The problem, she said, is fixable, though there has been a lack of political will. The DOE’s five-year capital plan includes 38,754 new seats for students, a figure that Haimson and her allies believe should be at least doubled.

The PS 32 annex is part of that capital plan, and while it will add seats in District 15, it is clear the district will need even more capacity to serve all of the students in the area.

A 2014 report from City Comptroller Scott Stringer found that one third of elementary schools in New York City registered at least 138 percent of their capacity in 2012. During February of last year, schools chancellor Carmen Fariña created the Blue Book Working Group, which was tasked to review the space utilization formulas of the DOE’s “Blue Book” and recommend reforms to it.

After the group gave its recommendations to the DOE last December, the department did not publish them until July, when it announced that some of them would be adopted. But it rejected the recommendation to shrink class sizes to those outlined by the Contracts for Excellence Law: on average, 19.9 students for kindergarten through third grade, 22.9 for grades 4-8 and 24.5 for grades 9-12. As DNAinfo recently pointed out, Mayor Bill de Blasio promised to abide by these sizes during his mayoral campaign.

The DOE has not built schools in Sunset Park, which has District 15 schools, where money was allocated to do so in order to ease overcrowding. “Sunset Park has been slotted to have schools for at least the last ten years,” one audience member said. “It’s not a budget issue.”

One parent, to enthusiastic applause, asked the panel why schools weren't included in new residential developments. When in response, SCA External Affairs Director Michael Mirisola said that his organization is not able to force the creation of schools, an audience member angrily interrupted, “Why not?”

It is up to local elected officials and the de Blasio administration to require public benefits like school seats in development deals. Officials are really only able to do so when developers are utilizing rezonings and other public incentives when they build. The administration and local officials in District 15 are currently negotiating a possible deal with the developer of the former Long Island College Hospital (LICH) site, where a rezoning may be allowed so that a larger development can be built in exchange for public benefits including school seats.

Haimson touched on another overcrowding issue, though not one at play in District 15 per se, decrying the state ensuring in law that any newly approved charter school is guaranteed space. “Here, we have this massive overcrowding problem in New York City where there are communities that have waited 20 years for a school, and yet any charter school can snap its fingers and the city has to give them space or pay for their rent,” Haimson told Gotham Gazette before the forum (she also spoke briefly as an audience member during the Q&A).

The DOE has faced criticism from Brooklyn residents for its handling of the PS 8/PS 307 District 13 rezoning, among others. Early talks with the department could prevent District 15 from having an adversarial relationship with the DOE when its rezoning process begins in earnest. The purpose of last week’s forum was to get dialogue started so that the lines of communication are open and community input is front and center.

“By coming together here with no specific group of so-called winners or so-called losers or people who want one thing and others who have a different goal, it is a really important step,” Sen. Squadron said in his remarks. “But it does not end here, because we have also seen that early engagement alone does not force the Department of Education to do what they're supposed to.”

Note: this article has been corrected to indicate the schools at the center of rezoning talks on the Upper West Side - they are 191 and 199, not 32 and 29 as initially indicated