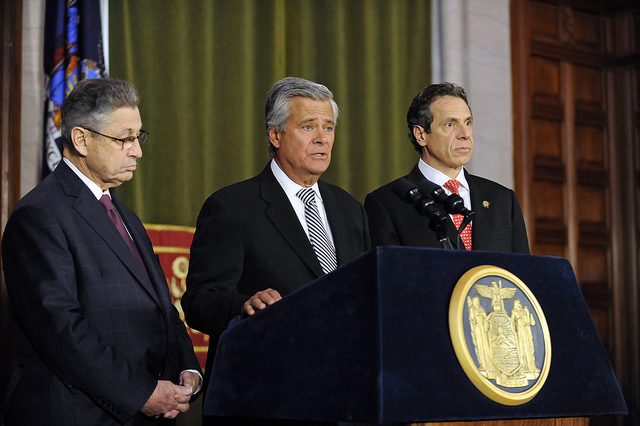 Dean Skelos in 2012, via The Governor's Office on flickr

Sen. Dean Skelos and his son Adam Skelos were convicted on eight federal corruption charges Friday. They were found guilty of a scheme where Dean Skelos used his power as Senate Majority Leader to influence companies to employ or pay his son. The conviction comes only a week after that of former Assembly Speaker Sheldon Silver on charges that he illegally used his influence for financial gain of $4 million.

The convictions speak to a larger campaign by U.S. Attorney Preet Bharara, whose office brought the cases against both Silver and Skelos, to change the culture in Albany that enables lawmakers to hold outside jobs while influencing major policy decisions and a campaign finance system that allows companies to pour unlimited funds into campaign accounts. The juries in both cases return verdicts within only a few days.

"The swift convictions of Sheldon Silver and Dean Skelos beg an important question – how many prosecutions will it take before Albany gives the people of New York the honest government they deserve?" asked Bharara in a statement following the conviction.

Skelos loses his Senate seat with his conviction. He and his son both face 130 years in prison. Skelos becomes the fifth legislative leader to leave office under ethics troubles since 2000 and is the thirty-third legislator forced to leave office due to criminal or ethical misconduct since then.

Throughout his time as leader Skelos became known as a cutthroat politician, willing to make extraordinary deals to keep himself in power.

Skelos inherited the Majority Leader mantle from the legally troubled and retiring Sen. Joseph Bruno in 2008. In 2009, Republicans were thrust into the minority but Skelos schemed to correct that annoyance. He concocted a deal with Democratic Sens. Pedro Espada and Hiram Monserrate and created a new ruling coalition with himself as Majority Leader and Espada as Temporary President. The deal eventually fell apart but Democrats lost their majority during the next election cycle thanks to a Republican campaign that focused on "Democratic Dysfunction."

Skelos successfully fought off a major push by reformers for independent redistricting that many thought would thrust Republicans permanently into the minority and when Democrats eventually won a numerical majority again in 2012, Skelos cut another deal. Sen. Jeff Klein and the Independent Democratic Conference partnered with Republicans giving them the majority and Klein the title of co-leader along with a hefty helping of pork and staff funding.

Adam Skelos was caught on wiretap scolding his father, Dean, for allowing Klein to keep his position when Republicans won an outright majority in 2014. Dean assured his son that Klein had no real power. "I'm going to control everything. He's going to get very little. Believe me. Very little. Everybody's going to know," Dean told Adam. He then pointed out the real objective of the exercise was to "Keep [Democrats] separate and fighting and hating each other. That's what's worked for the last six years. Keeping them at each other's throats."

Senate Republicans allowed votes on a number of Gov. Andrew Cuomo's major issues during his tenure as Majority Leader including same-sex marriage and the SAFE Act. He cut also cut deals with Cuomo and Silver on a number of incremental reform packages that included the formation of the Joint Commission on Public Ethics, an agency regarded almost universally as dysfunctional and impotent.

Skelos' conviction brought a tidal wave of calls for reform from good government groups and reform-minded electeds. Many repeated their post-Silver conviction call for Cuomo to call for a special session on ethics reform.

Dick Dadey, executive director of Citizens Union said that for Cuomo "not to call now for special legislative session is to aid and abet the rampant corruption in Albany."

"Inaction speaks louder than words," wrote Blair Horner of The New York Public Interest Research Group in a statement. "Failure by Governor Cuomo to convene a special session on ethics and inaction by the legislature can only be understood as a defense of Albany's status quo."

Cuomo is under increasing pressure to act on ethics as he shuttered the Moreland Commission that was investigating legislative misconduct in a 2014 deal with Silver and Skelos--a deal that greatly angered Bharara and appears to have sparked a federal investigation.

Cuomo issued a statement putting the onus on the legislature, but indicating he plans to push for reforms:

"There can be no tolerance for those who use, and seek to use, public service for private gain. The justice system worked today. However, more must be done and will be pursued as part of my legislative agenda. The convictions of former Speaker Silver and former Majority Leader Skelos should be a wakeup call for the Legislature and it must stop standing in the way of needed reforms."

Klein, Skelos' former partner in governing, issued a similar statement: "Today's conviction of Dean Skelos should be a call to arms for Albany and the people who serve in government," said Klein.

[Read: How Dean Skelos Thwarted Reform and Maintained Power, Despite the Odds]