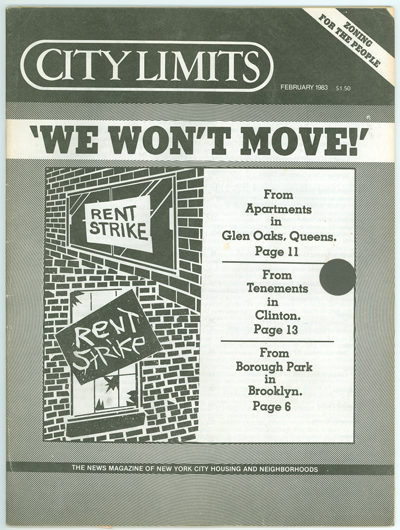 History is always a summary. It weaves together disparate threads of individual experiences, and some threads color the pattern more than others. The conventional narrative of New York City after the 1970s fiscal crisis emphasizes what mayors, police commissioners, developers and other powerful people did.

But that's not the story. It's just one.

Since its founding 40 years ago this month, City Limits has told a different tale—one that has sometimes complemented, and other times contradicted the official version. That's because we talked about the New York seen by people like tenants, single mothers, strikers, prisoners, advocates, social workers, the homeless, the young and others who, when they strolled the traditional corridors of power, did so with a visitor's pass.

As the excerpted stories below indicate, those New Yorkers had their own kind of power, and the city has been shaped by it. The stories are just snippets from our work over the past four decades. They reflect the history that City Limits saw and the New York it was founded to cover.

For a look at those stories as City Limits hits its 40th anniversary, click here.