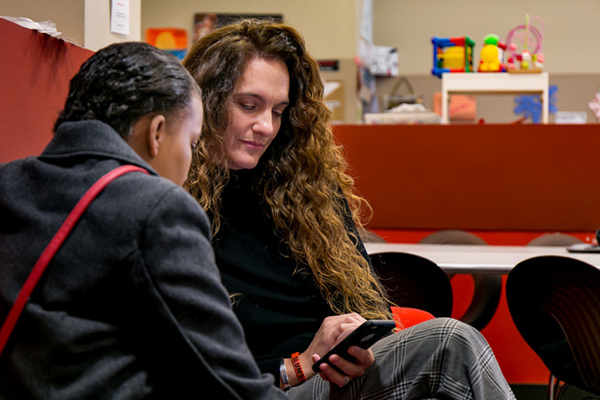 Julie Laurence, Chief Program Officer at Girls Educational & Mentoring Services (GEMS) with one of their members at their drop-in center. (Photo by City Limits/Adi Talwar)

Turning 21 is a milestone with a different meaning for a homeless youth in New York. When that day arrives, he or she usually must leave the city's youth shelter system, and they also lose many essential services. If they haven't found permanent housing on their own, they are forced back out onto the street. They can go into the large adult shelter system, but most youth don't feel safe mixed into the general adult population. Yet the city's supportive housing and the new LINC housing program are accessible only through shelters, meaning young people can miss out.

"The youth population is not provided with anywhere near enough resources to prevent them from becoming chronically homeless adults," says Craig Hughes, Assistant Director of Resource Counseling at Safe Horizon's Streetwork Project. "Without access to housing subsidies provided by the City, as well as resources such as public housing and consistent access to supportive housing, far too many homeless young people are at significant risk for violence, abuse and exploitation."