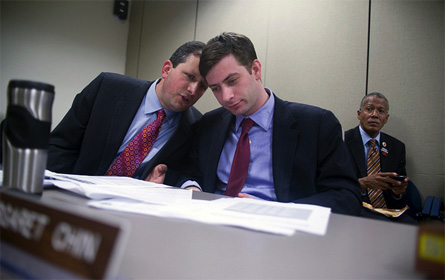 Photo by William Alatriste
There's probably no way to stop the whispering, but new rules give the public increased access to the public comments of their state legislators and City Council members.

During the marriage equality debate on the floor of the New York State Senate in 2009, as many as 14,000 viewers watched the Senate live over the internet. This marked the most online viewers ever for the Senate. During the 2009-2010 session, a total of 280,000 unique viewers streamed live content of the State Senate in action.

For the state legislature, whose members meet in Albany but represent constituents from throughout the state, webcasting helps expand the public's ability to watch government at work (it's a pretty long drive from Niagara Falls to Albany, afterall, clocking in at just over five hours).

For the Buffalo resident who can't make the drive to Albany for an agency meeting or the Queens office worker unable to take time off from the job to get to a 10 a.m. City Council committee hearing, viewing government online may be a good option. But government bodies in New York vary widely over what is webcast and what's not, as well as what kind of information about meetings they make available online to interested citizens. In general, the state has more stringent requirements than New York City does. Even though state law provides some framework for how government must engage the public, however, it leaves much of the outreach practices to the agencies themselves.

Under state law, governments in New York state and city must conduct their business in public. According to the state's Committee on Open Government, a public meetings is "the official convening of a public body for the purpose of conducting public business." Public bodies are government entities that consist of two or more people who perform a governmental function. This includes public authorities as well as the state legislature and City Council.

Any time members of a New York public body officially gather to discuss public business, the meeting must be open to the public. The open government committee's "Your Right to Know" handbook describes meetings as public "whether or not there is an intent to take action and regardless of the manner in which the gathering may be characterized."

The law requires that notice be provided at least 72 hours prior of every meeting that is scheduled a week in advance. Notice must be posted for the public and media in "one or more designated locations" and on the agency’s website, if the agency is able to do so. Materials for meetings do not have to be issued in advance or posted online, though are often distributed at the meetings themselves. In general, agencies do not have to accept public comment, though some allow it.

Under a 2007 executive order signed by Gov. Eliot Spitzer and extended by Govs. David Paterson and Andrew Cuomo, state agencies must webcast their meetings. City government has no similar requirement, though it increasingly uses webcasting.

The lack of that city requirement may soon become almost irrelevant. Under a law in effect since April 1, members of the public are able to photograph, broadcast, webcast and record public meetings. This new law applies to both city and state agencies, meaning that the public may soon take it into their own hands to begin webcasting meetings.

It used to be that one of the few ways to find out about public meetings other than phoning or visiting was to check the City Record or the State Register . Both are print publications that list public meetings, hearings, procurement and bidding opportunities, and other legal notices. The two publications are now available online. The state's version is fully searchable, while the city's is posted as a pdf, except for searchable procurement notices.

The state provides an online listing of webcast meetings, which links to every individual agency's website. State agencies vary, however, in how they format their postings and what additional information they provide, such as descriptions of the subjects of meetings.

Many city agencies also provide information about upcoming meetings on their websites, though they too vary widely in how the information is displayed. The Landmarks Preservation Commission lists its meetings on its homepage, along with the dates for when materials will be available. Similarly, the City Planning Commission features a link for meetings on its homepage and also posts meeting calendars that explain the process for providing public input along with disposition sheets that list the actions taken in previous meetings.

On its webpage, the Panel on Educational Policy lists meeting dates, agendas, directions, and minutes. Such information is required under the 2009 mayoral control reforms.

Other agencies provide less information. The Board of Elections for one posts notices on its homepage as well as minutes, but does not provide an agenda or other materials online. The Board of Health, the policymaking body of the Department of Health and Mental Hygiene, which approved the ban on trans fats in New York, only lists its public meetings through its "Notices of Intent or Adoption." Members of the general public may have trouble finding this type of type of listing and may not be able to decode the legalese.

Some agencies have made recent strides. The Metropolitan Transportation Authority, for example, has several committees and posts materials for its meetings at least a day in advance, Advocates say the MTA deserves a pat on the back.

"In the old days, you'd have to go to the meetings and hope that the copies didn’t run out," said Gene Russianoff, senior attorney for the New York Public Interest Research Group's Straphangers Campaign. The online postings, he said, are "the right way to do it. The meetings are hard to follow and understand if don't have the documents. You just can't visualize bus route changes without materials."

For most agencies in New York City, the public must attend in person to see meetings. While some content is available on NYC TV, which is available on cable or via antenna, it does not include all agencies' meetings. The City Council also recently began webcasting its stated meetings and lists meeting on a calendar on its website, though the public has to click through to determine which ones allow public comment.

The most recent City Charter Revision Commission also webcast its meetings, and provided transcripts and archived video. City Comptroller John Liu recently announced that the meetings of the city’s five pension boards would be webcast, though agendas and materials are not currently provided online.

Councilmember Gale Brewer, former chair of the City Council Technology Committee, believes that the council's webcasts help not only to lobbyists and the public, but also City Council employees.

"Staff who have to stay in the office, whether it's the district office or even at City Hall, are assisted by webcasting," said Brewer. "Not everyone has time to come down to City Hall, since government operates during the day."

Looking toward the future, Brewer believes that technology could allow for public comment via the internet for those who watch a webcast. She has used Twitter during hearings she conducted in the City Council to solicit questions from the public.

Commenting electronically, however, may not substitute for attending in person. Public comment sessions serve as an organizing tool for advocates and provide some guarantee that those attending will hear what is being said.

"My view is that there's nothing like being there if you want to have an impact," said Russianoff. "It's hard to ignore your issue if it is addressed by 10 speakers." In fact, Russianoff worked to change state law to require public comment at MTA meetings, and supports requiring other agencies to accept public comment as well.

While state law sets some minimum standards for public meetings, it does not fully utilize technology in distributing information to the public. State legislation sponsored by Assemblymember Amy Paulin and passed in the Assembly earlier this year would require materials for meetings to be provided online prior to or at public meetings of state and city government. One goal of the legislation is to reduce costs, since Freedom of Information Lawrequests often occur for public documents that are discussed at meetings but not put online.

In the City Council, Brewer currently carries legislation modeled after the state rules that would require all city agencies to webcast their meetings. She hopes council will take it up this fall.

"Right now, there are some meetings on NYC-TV, but they are shown at their leisure, not yours," said Brewer. "The City Council is moving in the right direction by webcasting its meetings, and we're pushing the administration to do the same."