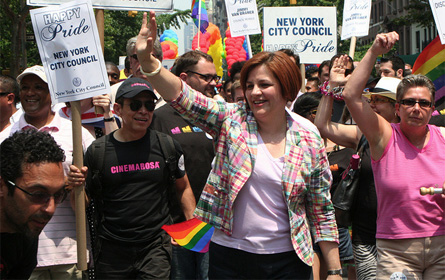 Photo by Boss Tweed
City Council Speaker Christine Quinn already has $3 million on hand if, as expected, she decides to run for mayor in 20103.

Pontificating pundits and political reporters cannot stop talking about the rise and fall of Donald Trump, Mitt Romney's flip-flops and Michele Bachmann's base. But closer to home, the political cognoscenti have already started to look beyond 2012 to the 2013 city elections.

With the often pivotal mayoral primary more than two years away and the general election a full 30 months in the future, candidates are already raising -- and spending -- money as savvy donors rush to shape the race from the get go. Political energy -- put on hold when the mayor and City Council extended term limits before the 2009 election -- is ready to burst.

So far, 18 members of the City Council, Comptroller John Liu and Public Advocate Bill de Blasio have raised money for 2013 bids for citywide office, a borough presidency or a City Council seat. Four additional council members have filed with the city Campaign Finance Board for 2013 but have not yet raised any money.

Information on the filings -- and much more -- is available on Councilpedia, Gotham Gazette's site monitoring local officials and the people who support them. Today, Gotham Gazette sharpens its focus on 2013 by sorting all contributions to sitting council members, de Blasio and Liu by sector, including: real estate, law, labor and so on. We list the major contributors for all these office holders, as well as which of their funders do business with the city or live outside it.

Already some patterns have emerged. City Council Speaker Christine Quinn, a likely mayoral candidate with well over $3 million, has received much of that from the real estate and finance industries. One of her possible opponents -- de Blasio -- has garnered money from unions, many of whom were key to his 2009 election victory, and from fellow politicians, particularly from his home borough of Brooklyn.

Another likely mayoral candidate, Liu, has a large number of contributions in the $500 to $800 range -- many from people who work in the city but live outside of it. So far Liu has no donors who have given $2,475 or more.

To see the data, go to Councilpedia and click on the candidate who interests you. The 2009 donations are listed and sorted -- for every official. If a candidate has 2013 money already in hand, that will be indicated on his or her Councilpedia homepage. Councilpedia also lists campaign expenditures for both 2009 and 2013, along with member items for fiscal year 2011, voting records, bill's sponsored and more.

Councilpedia also allows readers to share what they know about the officials, their record and their donors. To comment on a donation or a candidate, click the discussion tab on the appropriate page and type in a comment, hot tip or other message. For more on how to comment on Councilpedia, see our tutorial.

Clicking through the data finds some trends -- and intriguing tidbits.

The candidates with the largest war chests -- Quinn and City Councilmember Peter Vallone Jr., who is eyeing a run for Queens borough president -- had raised substantial money for 2009 contests before the term-limits extension. Both have rolled that money into their 2013 bids. 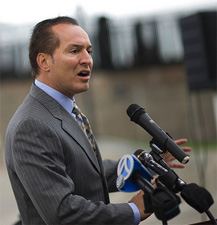 Photo by New York City Council
City Councilmember Peter Vallone is nearing the $1 million mark in his fundraising for 2013.

Liu and de Blasio, though, both spent heavily to capture their respective posts in 2009 and have had to begin raising funds anew. So far, this time around, Liu has garnered $513,472 and de Blasio $392,576.

The biggest fundraiser, though according to the Campaign Finance Board, is U.S. Rep Anthony Weiner, with more than $5.1 million, much of that raised for his aborted 2009 mayoral run. He is not listed on Councilpedia, which currently includes only sitting council members and the two citywide officials enrolled in the campaign finance system -- in other words, not the Mayor Michael Bloomberg, who, of course was self-financed.

Manhattan Borough President Scott Stringer, another presumed 2013 mayoral candidate has raised in excess of $1 million but also is not listed. Gotham Gazette hopes to add these candidates later this summer.

Other leading fundraisers for the upcoming election include Councilmember Joel Rivera, who thought about, and then decided against, running for Bronx borough president when Adolfo Carrion left the post to join the Obama administration; James Oddo, a likely candidate for Staten Island borough president; and Daniel Gardonick, who some think might run for Manhattan borough president if Stringer jumps into the mayoral race

--Of the candidates listed on Councilpedia, Quinn led the pack in the number of intermediaries -- also known as bundlers -- who have collected donations for her campaign.

--De Blasio has collected substantial contributions from people who do business with the city, including $4,950 from Bear Stearns managing director W.P. McMullen and $2,500 from lobbyist Allison Lee.

--Despite being a Republican, Oddo has gotten donations from a number of labor unions, such as the United Federation of Teachers. Many of his biggest contributors are from Staten Island, including Stanley Friedman, the Bronx Democratic leader convicted of corruption who now works as general manager of the Staten Island Hotel, and Bruno Savo of Savo Brothers builders.

-- In addition to substantial contributions from the real estate industry, in 2006, Vallone got a $2,000 donation from then Attorney General Eliot Spitzer and $4,950 from the Mets that he can use toward his 2013 run.

--In his likely quest for a yet to be announced higher office, Brooklyn Councilmember Dominic Recchia has raised slightly more than $150,000. Of that more than $23,000 comes from people named Gindi, at least some of whom are executives and owners of the Century 21 stores. One -- Isaac Gindi -- has already given Recchia $8,750 for this election cycle.

--Councilmember Elizabeth Crowley has amassed about $32,000 for a likely re-election bid. The chair of the Council Committee on Fire and Safety -- and a staunch opponent of cuts to fire houses -- Crowley has received $2,750 from the Uniformed Firefights Association, $2,507 from the emergency medical service workers, and smaller donations from unions representing fire officers and fire alarm dispatchers.

--So far, Leroy Comrie may be more notable for the money he hasn’t received than for what he has. As chair of the powerful Land Use Committee, he would be expected to get substantial donation from real estate interests. They backed him heavily in 2009 and supported the citywide campaign of his committee predecessor Melinda Katz. So far, he hasn't -- although he did get $250 from Katz's old campaign committee. Of course, Comrie, who is term-limited in 2013, may not actually be running for anything.

Correction: This story originally said 19 council members have raised oney for a 2013 race. The correct number is 18.