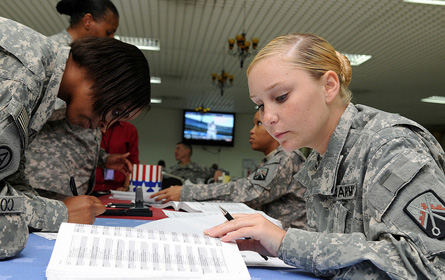 Photo courtesy of the U.S. Arm

Military and overseas voters across the country got a break in 2009 when the federal government eased the process for them to receive ballots and required that the ballots be sent 45 days in advance of the election. The good news for overseas voters, though, is creating a headache for New York election officials.

With New York holding its primary elections in September, there currently is not enough time for military and overseas voters to get their ballots before the general election under the requirements of the Military and Overseas Voters Empowerment Act. The state needed a waiver in 2010 to comply with the new law, and it is uncertain whether the federal government will grant it another one for 2012. The state is now weighing its options and may have to move the primary date. The question, then, is what the new date will be, and whether it will benefit voters, election officials or legislators.

Requirements of the MOVE Act

While New York has complied with some portions of the law, such as letting voters request ballots electronically and setting up a new, voter-friendly website, it still has not met the 45-day requirement. The current September primary date is too close to the November general election for ballots to be mailed 45 days in advance of the vote.

New York state did not change the date of the primary last year and instead applied for and received a waiver from the U.S. Department of Defense on the grounds that its effort to comply with another federal law related to elections â€“ the Help America Vote Act, which required the transition to new voting machines -- would have made it too difficult to comply with MOVE as well. The waiver allowed the state to send military and overseas ballots by Oct. 1, 2010, but more than 43,000 ballots , including those from New York City, were not sent by this deadline. The U.S. Department of Justice filed a lawsuit in response. That, in turn, was resolved by a consent decree allowing ballots from overseas and military voters to be received and counted up to Nov. 24, 2010.

The Federal Voting Assistance Program, which administers the uniformed and overseas voting laws for the Defense Department, has been in discussions with New York regarding compliance for 2012. "FVAP staff has met with New York officials and urged them to make changes necessary to ensure ballots are provided 45 days prior to an election," said Bob Carey, the program's director. He added that New York has the right to apply for an additional waiver, but "the waiver granted to New York in 2010 does not guarantee future waivers, and the state's comprehensive plan to cure the hardship that was part of that request is not necessarily grounds for a waiver in future elections. "

Lawmakers in New York do not think Washington will approve another waiver. "It's not likely for New York to get another waiver, since we got one last year,” said Assemblymember Joan Millman, a Brooklyn Democrat and former chair of the State Assembly's Election Law Committee. She noted that the failure of 13 boards of election throughout the state to get the ballots out by the Justice Department's Oct. 1 deadline last year may hinder prospects for a waiver for 2012.

Carey gives New York credit for changing the law regarding special elections this year, however. "It is notable that the New York legislature was able to adopt legislation proposed by the governor very quickly, which allowed the special election in the 26th Congressional District to be conducted on a schedule that allowed for transmitting ballots in a timely manner," he said.

To comply with federal law, the state must adjust its election calendar for federal elections, including those for the U.S. Senate and House of Representatives. Since it seems preferable to hold all elections at the same time, state elections will likely come along with the congressional balloting. If New York instead decides to split the voting, that would mean as many as three separate primary elections, since the presidential primary, which was held in February in 2008, will take place on the fourth Tuesday in April next year.

An earlier primary would allow more time both for boards of election to comply with the new deadline, and for military and overseas voters to send back their ballots. Likely for that reason, election officials have come out in support of a June primary. The Election Commissioners Association, an organization representing county election commissioners in New York, supports a primary on the fourth Tuesday of June, on the grounds that, since July and August are traditional vacation months, June make more sense. A June election also would allow voting to take place before schools close, avoiding having to reopen them just for the election. Finding enough poll workers could also be an issue later in the summer, given that there has historically been a shortage of poll workers even in September and November.

J.C. Polanco, commissioner and president of the city Board of Elections, supports the June date. "We recommended it to the legislature for the year of 2011. All of the county boards of election overwhelmingly supported moving the primary date to the last Tuesday in June,” said Polanco. He indicated that if the state legislature fails to act, the federal government might step in and change the date, something state legislators would not want to see happen.

Some advocacy groups supported a June primary in the 1970s. At that time, primary dates changed often depending on political winds. Concerned about the date being moved around, the League of Women Voters of New York State affirmed its support for a "single, permanent June primary" in 1978 and still supports a June primary. The state ultimately settled on a September primary.

June's appeal does not resound with everyone, particularly not with legislators who worry about an election falling when the legislature is still in session. "Most of my colleagues aren't happy about the June date," said Millman. "We're in session. If you have a competitor in the district and you're in Albany doing your job, you can't be present, and if you're in the district, you're not doing your job, so you can't win either way."

Millman noted, though, that the legislative calendar could be changed, much in the way the U.S. Congress goes into recess to accommodate elections.

Regardless of the date, good government groups stress that the state needs to comply with the federal law and provide a solution for military and overseas voters. "It is important that New York state goes the extra mile in protecting the vote of our service men and women,” said Bill Mahoney, research coordinator for the New York Public Interest Research Group.

Given New York's track record in implementing federal requirements regarding elections, the lack of action is no surprise. "New York was the last state in the union to comply with the Help America Vote Act of 2002," said Mahoney. "The Board of Elections and legislature were so slow in finalizing plans for updating our voting systems that we were sued by the federal Department of Justice."

Amid the flurry of the legislative session last week, there were some moves to address the overseas voting situation. Separate proposals were introduced into each house of the legislature, likely representing their current positions as the issue is negotiated. In the Assembly, Assemblymember Michael Cusick, the new chair of the Assembly's Election Law Committee, introduced a bill to hold state and congressional primaries on the fourth Tuesday in June. The Senate's proposal, put forth by Sen. Thomas O'Mara, the Election Committee chair, would put the primary at the fourth Tuesday in August.

It is expected that debate will continue into the summer and possibly fall, to be resolved at a special legislative session.

One of the main concerns about an August primary is that turnout will be low. In 2010, 14 states, including New Jersey and California, held June primaries. Another 14 states, Connecticut and Florida among them, had August primaries. Just two states had primaries in July â€“ Georgia and Oklahoma. (For a full list of states primary dates, go here).

It appears that no comprehensive study has been done regarding turnout in summer primaries. This may be due to the idiosyncratic nature of primaries, in which any number of factors may drive turnout, including the level of competition and whether the state has an open or closed primary system.

An informal survey of states similar to New York does not provide any evidence that turnout is worse in August, though it does highlight that turnout is a problem in general. In 2010, in primary elections for governor in August, Connecticut saw 24 percent of voters turn out, and Florida saw 25 percent come to the polls. Pennsylvania’s May primaries for governor also had a turnout of 25 percent of voters last year. In New York, where voter turnout consistently has been among the lowest in the country, just 16.5 percent of Republican voters turned out for the September primary for the governor in spite of a hotly contested race, calling into question winner Carl Paladino's claims that there was a "people’s revolution." Texas’s March primary for governor saw a similar low turnout of 16.6 percent.

Following Connecticut’s low turnout, there were calls to move the date from August to June. The secretary of state, who runs elections there, supported the idea. Regardless of the date, though, it seems public education may be necessary to ensure that more voters turn out, particularly if the date changes.

Redistricting and the 2012 Primary

Complicating the picture at this point is New York's redistricting process. District lines must be drawn in advance of the 2012 election, and efforts to create an independent redistricting commission are still afoot. No matter who draws the lines, district borders need to be in place before candidates gather petitions to get on the ballot. Petitioning for a September primary starts in June, so a June primary would probably mean petitioning would begin in April.

In addition, New York's lines require approval of the Justice Department under the Voting Rights Act, so extra time needs to be built in for that. Lawsuits from outside groups also occur every redistricting cycle and could further extend the approval process. There already is a lawsuit underway challenging a law enacted last year on the counting of prisoners for redistricting. If New York does not change its election calendar to comply with the MOVE Act, you can add one more lawsuit to the pile, with the voters waiting for resolution.