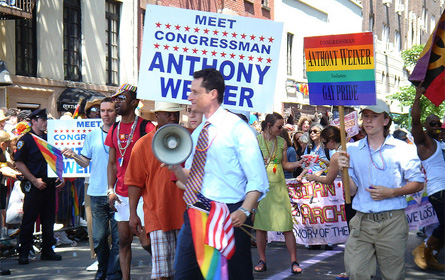 Photo by Mark Chang
Anthony Weiner campaigns for re-election in 2007. Now party leaders largely control who will take his place.

(Update: On Friday, the Republican Party selected Bob Turner as its nominee for the Queens/Brooklyn congressional set left vacant by the resignation of Anthony Weiner.)

In the age of the endless campaign and the political marathon, Gov. Andrew Cuomo has come up with a kind of electoral lightening round.

On July 1, Cuomo announced that special elections to fill six empty Assembly seats -- four of them from the city -- as well as the Brooklyn/Queens seat in the House of Representatives left empty in the wake of the Anthony Weiner "sexting" scandal would take place Sept. 13.

While that may seem far away -- on the downside of a summer that has only begun -- it set off a rapid scramble. Nominating documents for party sanctioned candidates are due Monday -- 10 days after Cuomo issued his proclamations. Candidates running without the imprimatur of their party will have to amass signatures, vet and file them -- all no later than midnight of July 13.

These would represent tight deadlines any time of the year -- let alone in July and during a period that encompassed a three-day weekend. How can rank and file party members, let along ordinary voters, influence the process?

The answer is, to a great extent, they can't. And that may very well be the point.

Under New York State law, special elections take an end run around primaries, putting the choice of party nominees entirely in the hands of the party leadership. On the day of the special election, voter select among the nominees of any parties -- including smaller ones, such as the Working Families or Conservative parties -- that choose to place a candidate on the ballot. But in a state where many districts feature wildly lopsided party registrations, that comes down to little or no choice at all.

As a result turnout can be light to virtually nonexistent.

To take an extreme case, in a June 2009 special election to fill an Assembly vacancy in the Bronx, only 2.3 percent of voters turned out, according to a recent analysis by Citizens Union. Democrat Marcos Crespo won 1,457 votes to defeat Republican Leopold Paul, who got a mere 106 votes.

Statewide, the turnout in special legislative elections between 2007 and this June was only 12.3 percent. For the city alone, the number was lower -- just under 10 percent.

Under state law, Cuomo did not have to call a special election -- at least for the Assembly seats, according to the report by Citizens Union, which publishes Gotham Gazette. If he had not there been a primary for those positions on Sept. 13 -- which is primary day -- followed by a general election in November.

Good government groups criticized Cuomo's decision to take the special election route instead. "We strongly disagree with this decision, which we believe will result in lower voter turnout, increased confusion at the polls and potentially higher costs to localities,' the statement said. It went on to assail the special elections for empowering "the interests of party leaders, rather than presenting voters with a real choice of candidates at the polls."

Some editorial pages agreed. "Party leaders will now get to choose the candidates to run. That is not the way a democracy is supposed to work. Unfortunately, it’s the way things are done in New York,'" the Times wrote.

The Road to Incumbency

While the special elections will technically fill the affected seats only until the 2012 elections, the decision made in party backrooms over the past weeks are likely to have long-lasting effects -- at least on the Assembly districts.

A special elections give its winner the mark of incumbency -- an advantage whose effect in Assembly and State Senate races in New York can hardly be overestimated. The Citizens Union study found 26 percent of legislators in office on January 2011 had initially been chosen in special elections. In the State Assembly, 31 percent got to Albany this way.

The congressional contest stands out as an exception to that pattern. While the contest to fill Weiner's seat in Brooklyn and Queens is the marquee race for Sept. 13 whoever gets the prize will likely have to find a new job in January 2013. With New York set to lose two congressional seats in the current redistricting, Weiner's fall left his Ninth District ripe for elimination.

Despite that a number of well and not so well-known Democrats vied to get the nomination, which essentially lay in the hands of one man: Queens Party Democratic Chair Joseph Crowley. (Seventy percent of the district is in Queens, giving Crowley a lot more clout here than his Brooklyn counterpart Vito Lopez.) The list included at various times the eventual winner, Assemblymember David Weprin; his fellow Assemblymember Rory Lancman; Melinda Katz, like Weprin a former City Council member who ran unsuccessfully for city comptroller in 2009; Eric Gioia, another onetime member of the council who does not live in the district; current City Councilmember Elizabeth Crowley, who's Joseph's cousin; and two faces from the past -- former Queens Borough President Claire Schulman and former U.S. Rep. Elizabeth Holtzman, a rising star of the Democratic Party in the 1970s who has been out of public office since 1994.

Weprin served on the City Council and chaired the powerful Finance Committee until he left to make an unsuccessful run for city comptroller in 2009, coming in fourth in a field of four. He then moved to the State Assembly, replacing his brother, Mark, who had been elected to David's old council seat.

Weprin reportedly has said he would not try to run for a full congressional term next year. That was key to his getting the nomination, many believe, since if the district is eliminated, its representative would have had to take on another Queens incumbent -- possibly Joseph Crowley -- to remain in Washington after January 2013. A turn in the House, though, could lead the way to Weprin's making another bid for city office -- comptroller, perhaps.

Republicans believe they have a shot, however remote, at this district, given voter dissatisfaction over either Weiner's conduct or the Democratic Party's role in pushing him to resign -- or a combination of both. The district is said to be the second most Republican one in the city -- the 13th in Staten Island and Brooklyn has the most GOP members. Democrats, though, still outnumber Republicans by 130,000, and Democrats have held the seat since the 1920s.

The daunting odds have not stopped the GOP from having a spirited internecine fight. After City Councilmember Eric Ulrich announced he would not run, the race seems to come down to Bob Turner, who challenged Weiner and got 42 percent of the vote in 2010, and Juan Reyes a partner in the Manhattan law firm Reed Smith, who has ties to former Mayor Rudolph Giuliani.

Reyes appeals to some in the GOP because of his purported fundraising ability and potential to appeal to Hispanic and Italian voters. With both candidates hanging tough, reports surfaced that the Conservative nod would go to Turner, with Reyes running on the GOP line.

Last night, the Socialist Workers Party announced it would mount a petitioning drive to place its candidate, Christopher Hoeppner, on the ballot.

The split between the Republicans and Conservatives, though, could strengthen the Democrats' position on Sept. 13. If Weprin does win, there could be yet another special election -- this time to fill his Assembly seat. That post has been held by one member of the Weprin family or another since 1971.

Meanwhile four Assembly seats already stand vacant in New York City: two in Queens and one each in Brooklyn and Manhattan. In three of them the Democrats seem to have made their choice, leaving that candidate a heavy favorite to go to Albany.

"It’s business as usual with the special election process," said Rachael Fauss, Citizens Union's policy and research manager. "Very few people select who will be on the ballot."

The most hotly contested is in Brooklyn's 54th District, represented until recently by Darryl Towns, who left the legislature for the Cuomo administration. The competition for the Democratic nod began as a fight between candidates representing two rival factions: Rafael Espinal, an aide to Councilmember Erik Dilan who is seen as the choice of Vito Lopez's Brooklyn Democratic organization, and Deirdra Towns, Darryl's sister and the daughter of longtime U.S. Rep Edolphus Towns.

In June, though, Jesus Gonzalez, a community organizer with the immigrant advocacy group Make the Road NY, announced his run. He picked up support from a number of anti-Lopez Brooklyn Democrats, such as Rep Nydia Velazquez, and City Councilmember Diana Reyna.

On Tuesday, the Working Families Party announced its support of Gonzalez, meaning he can get on the ballot and give the Democratic candidate competition without having to collect signatures. This is the only special election race where the party plans to field its own candidate rather than cross endorsing a Democrat.

"That is the race we are most deeply involved in and committed to," a party spokesperson said.

Given Lopez' considerable clout, most see Espinal as likely to win out over Towns. She then would have to decide whether to try to petition her way on the ballot. According to The Brooklyn Politics, that would be no easy task: She would have to garner 641 signatures from district residents by July 13.

Towns seems to be staying in though. On her Facebook page Wednesday she continued to seek campaign contributions.

In the other three districts, the Democratic Party's choice seems clear.

As expected Michael Simanowitz, longtime chief of staff to former Assemblymember Nettie Mayersohn, got the Democrats' backing to succeed his former boss as the representative from the 27th district in Queens. Mayersohn retired to spend more time with her family, less than six month after running for -- and winning - re-election.

So far, there seems to be no Republican candidate.

Another chief of staff did not fare as well as Simanowitz. JoAnn Shapiro reportedly wanted to replace her old boss -- Audrey Pheffer, who left the Assembly to become Queens County Clerk -- and, Liz Benjamin has reported, Pheffer had indicated she would support her. Last month, though, Shapiro said she would not run.

Earlier this week, the Democrats picked Philip Goldfeder, an aide to Sen. Charles Schumer and former aide to Mayor Michael Bloomberg, as their nominee for the Assembly seat from the 23rd District.

GOP District Leader Jane Deacy has been considered the likely choice for her party's nomination, but so far nothing official has been announced.

In the fourth race -- in the 73rd district on Manhattan's East Side -- Daniel Quart quickly emerged as the favorite to replace Jonathan Bing, who has also joined the Cuomo administration. Quart, a lawyer, community board member and unsuccessful City Council candidate, has had support from Rep. Carolyn Maloney and other key Democrats.