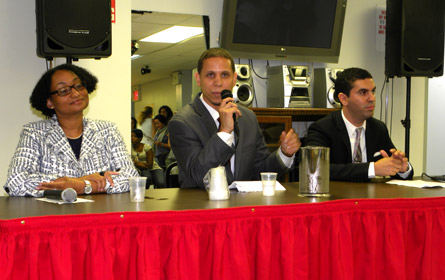 Photo by Candy Godron
Candidates for the 54th Assembly District meet in Cypress Hills to debate.

The doors burst open at the Roosevelt Community center at 400 Hart Street in Brooklyn. Just a few minutes before noon on a Thursday in July a group of elementary school aged kids stream onto a stretch of concrete -- they yell and laugh while organizing a game of two-hand touch -- and a group of girls start jumping rope. Garbage bins overflowing with trash sit feet away, homeless men pick at the debris and curse at each other, and construction equipment whirs and clangs throwing dust into the air across the street.

Inside a group of seniors gather for lunch -- oxtail, rice and beans, and collard greens. The seniors here readily tell you what is wrong with their neighborhood -- the streets aren't paved, young people don't have jobs, can't feed their families and resort to crime. Fresh food costs too much, and what is passed off as fresh simply isn't. What has prompted the discussion is a visit by Deidra Towns one of three candidates vying for the state Assembly seat vacated by Darryl Towns, Deidra's brother, who vacated the seat to become Gov. Andrew Cuomo's housing commissioner.

The race for the 54th district, which encompasses Bushwick, City Line, Cypress Hills, East New York and part of Bedford Stuyvesant, isn't a typical special New York City election. Yes, as with most special elections the power brokers have chosen a candidate they hope to see easily slide into the seat without much of a struggle. Special elections usually have low turnouts, and it is traditional in Brooklyn for the candidate with the Democratic line to win easily, but this time various power brokers back three different candidates.

Towns has her family name. She is the adopted daughter of U.S. Rep. Edolphus Towns, and Brooklyn voters are accustomed to voting for that name.

But they won't be able to do it on the Democratic line this year as Rafael Espinal, staffer to City Councilmember Erik Dilan, son of state Sen. Martin Dilan, has the Democratic, Republican and Conservative lines, and is also backed by Brooklyn Democratic leader and power broker Assemblymember Vito Lopez. Because there is no primary for special elections, Towns had to create her own line and so will appear on her own Community First line.

Meanwhile community organizer Jesus Gonzalez is running on the Working Families Party line and reportedly has the backing of Rep. Nydia Velasquez, a long-time rival of Vito Lopez.

In a race where turnout promises to be very low, Espinal is thought to have a clear advantage because he has the Democratic line. City Hall website recently reported that Espinal also has an edge because he has help from staffers who paid by government salaries for their jobs on the staffs of Councilmember Dilan and Martin Dilan. City Hall reported that campaign finance records show that Espinal's press person Michael Olmeda, who works for Sen. Dilan as a field coordinator, had been paid only $500 for his campaign work through mid-August even though he works on Espinal's campaign at all hours of the day. Council staffers are not supposed to work on campaigns during the regular work day.

Espinal was the only candidate who was not interviewed for this story. Olmeda scheduled and canceled, or failed to show up for two interviews and before one failed interview he promised Espinal would "walk out" if Gotham Gazette asked any questions about Espinal’s endorsement by the Conservative Party and "things everyone has been asking about."

Towns has also faced controversy concerning her political allies. The Capitol reported that the non-profit Towns claims to be employed by and that she says has given her the experience she needs to be a public servant isn't exactly transparent. There is no record that the Versie B. Towns foundation has has filed a tax return since its inception in 1997, and it has not registered with the New York attorney general's office. Towns' spokesman told The Capitol that as far as Towns knows the organization did file with the state. The not for profit reportedly has something to do with education but it isn't exactly clear what.

Towns has the advantage of having her father's network of fundraisers behind her. WNYC reported that $91,000 -- a third of the money she has raised -- comes from out of state donors. Some of the largest of these donors have ties to her father.

On Thursday Towns tried to put some distance between herself and her family. "I am not my father, I am not my brother," she said. But when she addressed the group of seniors she and her campaign staff stressed her last name. They instructed the seniors very specifically how to vote for Towns on the Community First line. Later at a town hall meeting at the Cypress Hills Senior Center, Towns cast her campaign as "of the people," and separate from political dynasties and machine politics.

The seniors were aware of the race but most of them said they were not aware of the other two candidates vying for the seat. In a low turnout special election, educating and marshaling loyal voters is the key to victory. Towns is expected to rely on the African American community that has supported her family for years. Espinal will marshal Latino voters who are loyal to Dilan and Lopez, and Gonzalez has his experience as an organizer for Make the Road, an advocacy group for immigrants, as well as the backing of the Working Families Party, which is known for its ability to put boots on the ground and knock on doors.

Gonzalez's experience in community organizing and his connections to grassroots could give him a chance to pull off an upset, some observers think. At the town hall on Thursday night a large group of teens and 20-somethings packed the room to support Gonzalez and cheer his responses.

The forum provided an interesting look at the candidates' styles. Towns played up her role as a single mother and tried to separate herself from any talk of political dynasty -- "There isn't any party politics over here," she said.

Gonzalez' speaking style seemed informed by that of President Barack Obama. He trashed the typical machine politics of special elections and said voters had an opportunity to vote for him to change things.

While Gonzalez hammered away at the idea that the special election is a fixed process with candidates appointed by the machine, Espinal did very little to dispel that notion.

Espinal seemed nervous and almost agitated. He continuously praised "the councilman" and noted that he has experience on "the city level." He also took stances that were more conservative than his opponents -- saying, for example, the district was being "dumped on" with the number of half way houses being constructed in the district. While Gonzalez and Towns said they thought rehabilitation is important, Espinal said Manhattan and Staten Island should take their share of halfway houses.

The candidates differed on other issues as well.

For example when candidates were asked about the performance of schools Chancellor Dennis Walcott, Towns said she was taking a wait-and-see approach. Espinal said that Walcott certainly "isn't Cathie Black" and smiled while Gonzalez spoke about mayoral control muzzling parents and proposed making chancellor an elected position.

The crowd at the forum also was interested in hearing about how the candidates would work to get their streets paved, get fresh food into the district and create jobs. Espinal proposed tax credits for businesses that hire the unemployed. Towns supported the use of bridge loans to help start businesses and bringing green technology jobs to the district. Gonzalez asked how many people in the crowd wanted to see a millionares tax, and the crowd exploded in favor. Towns and Espinal both agreed that they supported the tax. But Assembly members do not fix potholes and have very little influence on bringing jobs to their neighborhoods.

A revealing moment came during a discussion on housing. Gonzalez said he had refused to take money from "slum lords" -- he has accused the other candidates of doing just that. Espinal in return noted that his father is a homeowner and said that property taxes weighed on him. He said he would like to see a property tax cap for New York City as well as the one passed earlier this year for the rest of the state.

Espinal’s stance against same-sex marriage did not come up, nor did his endorsement by the Conservative Party.

The most telling moment, however, may have come when the candidates were asked if they support term limits for state legislators. Towns, the first to answer, responded that she did not support them -- the crowd exploded with applause, Espinal said that elections are term limits, and the crowd approved just as enthusiastically. Gonzalez turned the talk to election reform and called special elections a rigged process. The crowd wasn't as tickled.