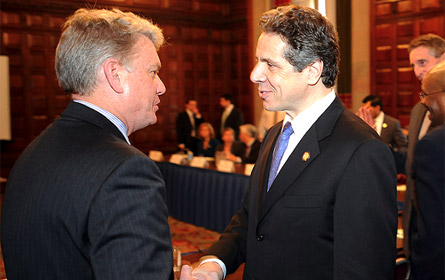 As early as today the administration of Gov. Andrew Cuomo is expected to unveil CitizenConnects, a website designed to open the executive branch to the public. The project, which has been under development for about three months, will deliver on Cuomo's campaign promise to make his detailed schedule public -- when his meetings are, who he meets with, where he is and why he is there. It will also make his travel records available to the public.

"Democracy works when the voice of the people rings strong and citizens participate in government," Cuomo said about the site which will look to involve citizens with the executive branch. "I urge all New Yorkers to contribute their ideas for building a new New York and join in discussions with their fellow citizens on important state issues."

The administration, which has faced some criticism for its lack of openness, now promises to reveal an array and depth of information almost hard to imagine in Albany. It could have a major effect on operations in the capital where doing business under wraps and behind closed doors has been standard operating procedure. It all depends on how the Cuomo administration uses it.

Gotham Gazette got an exclusive preview of the site yesterday. CitizenConnects will provide advance schedules, detailing up to three weeks of public appearances for cabinet members and commissioners. And it will look back as well, providing detailed records of Cuomo's schedule, for his first nine months in office.

Other politicians who make their schedules public—like Sen. Kirsten Gillibrand— list calls they have with other officials, meetings with labor groups, town hall meetings and the like. â€¨Administration officials say the site will provide that type of detail regarding Cuomo's schedule. It will offer less detail on commissioners' schedules.

The flow of information is meant to be more than just one-way. Cuomo, Lt. Gov. Bob Duffy, commissioners and cabinet members will participate in weekly online chats. Using the website, members of the public will be able to submit policy ideas and questions to Cuomo, executive staffers and commissioners.

Cuomo is tentatively scheduled to be part of an on-line chat on the site this Saturday.

One administration official said the site was a "first step," and that it would become more interactive over time.

The site will keep notices of public meetings and allow users to register to attend meetings of groups such as the Regional Development Councils and to connect with programs like "Labor For Your Neighbor."

Cuomo has been under increased scrutiny from the press and good government groups because of his apparent failure to deliver on the promise of greater transparency. Recently, a controversy over redacted travel records and Cuomo's predilection for sharing very little with the press have caused pressure to mount for him to become more accessible and the administration to be more transparent. A recent Newsday article about the Cuomo administration details how its recently-issued list of public information officers does not include their home or cell phone numbers--something that the Spitzer and Paterson administration did include. Yet with sterling approval ratings and loads of legislative accomplishments, some felt that the administration felt little need to open up. The release of the site comes just five days before a panel discussion at the New School titled, "Cuomo and the Media:Managing the Message."

The administration started work on the project three months ago after the end of a whirlwind legislative session and has been discussing the initiative with good government groups. It attributed further delay to Tropical Storm Irene and the flooding that followed.

Up until now the Cuomo administration has released a schedule of events the governor attends, events such as closed-door meetings with his cabinet and informs readers that he will be in "Westchester and Albany." It does not, though, detail who he is meeting with or say exactly where he is.

Azi Paybarah of Capital New York asked Cuomo about openness in his administration during a question and answer session in June. "I think I disclose on a daily basis where I am, what my public schedule is. I think we’ve been doing it on a daily basis," Cuomo replied.

Keeping secrets has long been a way of doing business in the capital. "In Albany the way to keep policy intact is to keep it secret. The leaders go into a room and hash it out," said Barbara Bartoletti of the League of Women Voters New York. They keep their plans secret, she said, " because if it leaks out it will fall apart."

When Cuomo took office the state was still reeling from two dysfunctional governors. The public was focused on corruption and the "three men in a room" power structure that has guided Albany for years.

"Prior to Cuomo we really had one-and-a-half to two-and-a-half men in a room," said Baruch College professor Doug Muzzio. "It hasn’t been a full man in a room representing the governorship, because Paterson was weak and Spitzer was dysfunctional. Clearly the game is different now. There was yearning for leadership and we got it."â€¨

But, Muzzio noted last week, Cuomo still operated with little transparency. When it came to making policy and law, Muzzio, said, Cuomo did it all extraordinary quietly, because he understands the game,” says Muzzio. "He comes in with a huge advantage, having been inside the governor's mansion for years. So much of what he did, he did in private. ... His relationship with the news media is the antithesis of his father -- he doesn’t talk to the press because he knows if he doesn’t he won't stick his foot in his mouth like Gov. Christie or his leg up to his knee in his mouth like Bloomberg."

It is of course far too early to know how much the new website could change things.

The new website may not alter the way Cuomo speaks to the press or how he deals with the legislature, but having his schedule and records public will keep reporters and watchdogs better informed and possibly help them and the public better understand how policy decisions are reached.

Cuomo has recognized the value of openness in the past. It was Attorney General Cuomo, after all, who hired former New York Public Interest Research Group legslative head Blair Horner to set up Project Sunlight, a searchable database of campaign contributions, legislation, member items and lobbying information.

On his first day in office Cuomo opened up the second floor of the Capitol, which houses his office and had become known as "Fort Pataki" because the former governor had closed it, walling himself off during his three terms in office.

When Cuomo took down that wall, "People sort of stopped watching, except for good government groups," said Bartoletti.

But Bartoletti said the sunlight then seemed to fade. While he opened the second floor of the Capitol, he closed the third floor entrance to the Legislative Office Building, creating a logjam for lobbyists and visitors. Instead of entering the office building directly, visitors have to go through security in the Capitol building, go down an escalator and through a tunnel, and then head up to the the building from the concourse at the Empire State Plaza. The change was made, according to the Cuomo administration, to save money by eliminating a security checkpoint. But to Bartoletti the greatest symbol of Cuomo's lack was how few times she saw him.

"I've never seen him walk through the capital. I used to see Gov. Spitzer walking to various events, and certainly David Paterson going to the convention center and other functions. But I've never seen this current governor attending what goes on in Albany. It is just an outward symbol of how he seems to have retreated into his offices in Albany and New York City," Bartoletti said.

In its first months in office, the administration drew scrutiny for its close relationship with NY Post scribe Fred Dicker and disregard for other news outlets and for guarding information the way a dragon guards its gold.

It has become tradition in Albany for reporters to request records of the governor's travel on state police aircraft. When that time came this year, the Cuomo administration seemed unprepared. The Times Union and Associated Press said Cuomo's information officers haggled with them about what they would disclose.

"Previous administrations, when asked for the same data, provided thick piles of the state police travel request forms that show all the key information, including the purpose of the trip," wrote Times Union reporter James Odato.

In contrast, Odato said, Cuomo administration FOIL lawyer Amy C. Karp released "just six pages" of travel information. And, he wrote, the travel information came in a spreadsheet, not in the public documents typically shared with the press. Beyond that, the documents were full of black ink that "made it impossible to understand why someone used planes or helicopters during the governor's first six months in office." After reporters haggled with the administration, Cuomo spokesman Josh Vlasto shared more information but would only read it to the press; he did not provide copies.

Other Albany correspondents have expressed concern about transparency in the Cuomo administration. On Aug. 8 the Buffalo News ran an editorial titled "Not Transparent Enough." The piece describes the struggle of the paper's Albany bureau chief, Tom Precious, to get the administration to lay out how it will fulfill its mandate that all state agencies cut operating costs by 10 percent this year.

"The administration is talking about transparency without fully embracing the concept," reads the editorial. "Gov. Andrew M. Cuomo should remember that transparency is good for the public, which has a right to information, and for his own image."

The editorial further notes that the administration has released a statement "indicating the budget-cutting exercise at agencies is well under way."

"We think that’s good," the News writes, "but we really don’t know because we have no idea of the details of the plan to reduce operating expenses at all state agencies by an average of 10 per-cent. And no details seem to be forthcoming."

Good government advocates are reacting positively to the new website. "I congratulate Gov. Cuomo for taking government transparency to a new level. By providing information of importance to the public, even before anyone asks for it, the website will give New Yorkers the opportunity to know how their government serves them and offer their points of view. This is a groundbreaking effort in bringing government closer to the people," said Robert Freeman from The Committee on Open Government.

Russ Haven, executive director of the New York State Public Interest Research Group, or NYPIRG, said, "The 'town hall' web page offers a user friendly way for two-way communication between New Yorkers and the governor and his staff. Particularly at a time filled with so many challenges, the public wants to keep tabs on what public officials are up to. Through this portal the governor can boost transparency of his activities and contribute to the public's trust in government."