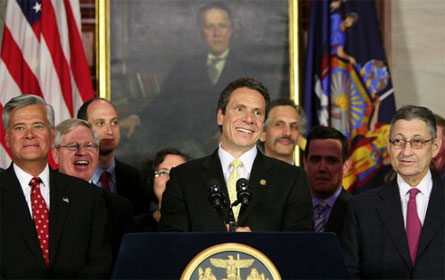 Photo by The Office of Gov. Andrew Cuomo

New York State has been without a functioning ethics watchdog for two months and change. The Commission on Public Integrity (CPI) has limped along with skeleton staff while legislators and the governor work on picking their nominees to head the yet-to-be formed Joint Commission on Public Ethics (JCOPE) - - the first ever watchdog that will oversee the legislature without being directly controlled by that same legislature. The legislature gets to make eight appointments—three apiece for the majority parties and one apiece for the minority parties, while the governor’s office gets to make six.

Deliberations over nominees are well underway in the four conferences—in fact Assembly Minority Leader Brian Kolb says his conference has submitted its pick to the office of Gov. Andrew Cuomo. "We chose a gentleman who is a lawyer because we feel it would be helpful to know the law while serving in that role," Kolb said, adding that the search was tough because the job is demanding and comes with few rewards. He says it is now up to the Cuomo administration to act.

"We continue to vet candidates," said Assembly spokesman Mike Whyland, adding, "We expect an announcement in the next week or two." Word out of the governor’s office is that there are no obstacles to meeting the Dec. 12 deadline for JCOPE to be up and running. This could come as a surprise to some observers as grumblings out of a few conferences are that legislators are having trouble finding qualified nominees and are unsatisfied with the ones they have seen so far.

But critics wonder why there has been a two-month gap between agencies at all. The Times Union reported on August 15 that Cuomo waited to sign the ethics bill because of a "desire to get the new ethics apparatus in place." Clearly the apparatus was not put in place before the bill was signed.

Dick Dadey, executive director of Citizens Union, sister organization to the Citizens Union Foundation which publishes Gotham Gazette, said that the gap was not something he favored. "This element of the bill was hard to swallow. It was one of the prices that had to be paid to get the first ever oversight of the legislature that was not controlled by the legislature."

Dadey says the rationale behind the delay was that the agency had to be built from the ground up. "CPI was essentially a merger between two state agencies into one. This effort is essentially tearing down a house and starting from scratch. We accepted that explanation and we look forward to seeing a strong new house."

CPI was created in 2007 under Gov. Eliot Spitzer, and its appointees were basically seen as thralls to Spitzer. Good government groups generally regarded the CPI as toothless and inept.

Will They be Prepared?

Despite the confidence of the legislature and governor’s office that they will have JCOPE up and running by Dec. 12 some say that there is no reason to wait that long, that the new body needs time to get organized and get its bearings before it is truly functional. They worry getting commissioners up to speed will lead to an even larger gap between truly functioning watch dog agencies.

"They have to pick 14 people for the panel, who then have to pick an executive director who can land on their feet and rebuild an agency in 60 days,” says Grandeau. "I think I have the most experience of anyone in Albany at this. I built a commission and ran it for 12 years and I know I couldn’t do it in 60 days. I don’t know who can.”
Barbara Bartoletti, legislative director of the League of Women Voters, shares Grandeau’s concern.

"This is not an election year state wide, not so much money to track, the legislature is not in session but it was something we were concerned about when bill was being negotiated. They have to hit the ground running, get to know each other, learn to work together. It could take 3 to 6 months for them to start working well and then you are into the legislative session."

The Commission on Public Integrity is currently running on a skeleton staff and has only one investigator who takes complaints. Citizens Union recently filed a complaint regarding an organization, and they say their experience was a good one.

"We filed a complaint about a particular entity and the investigator was very helpful," said Alex Carmada, legislative director for Citizens Union. "She explained what it took to file a complaint, the time frame it would take and how it would be handled if they needed to do an investigation. JCOPE will eventually inherit their work."

"Clearly by our own experience the CPI skeleton is handling the responsibilities given them during this period,” said Dadey. "We tested it and we are pleased."

As for who is being considered for JCOPE and on what grounds, there simply isn’t much information.

"I haven’t heard boo," said Grandeau. "This is the last thing that should be decided by three men in a room. They should be out on State Street shouting about it, screaming about what is going on. This is about transparency.”

Grandeau and Bartoletti are concerned that the pool of candidates will be narrow and politically connected.

Grandeau put it more bluntly: "We don’t know who they are looking for. Are they going to load the commission with middle-aged white men from NYC?"

CPI appointees made by Spitzer were constantly under attack for making moves that seemed to benefit their boss. So far the Cuomo administration has drawn extensively from its political allies and donors to fill appointments. Grandeau is not terribly confident that JCOPE will be any more functional or ethical than CPI—especially since a minority of commissioners can block an ethics investigation.

So far, despite CPI almost all of the major scandals involving New York politicians have been dug up by federal agencies. Grandeau points out that legislators including Former Senate Majority Leader Joe Bruno and Sen. Carl Kruger were both snared by federal investigations, not by audits of the disclosure forms they turned over to the CPI. The new law that created JCOPE calls for greater disclosure from politicians but it is unclear if the members of JCOPE will be more aggressive in auditing and investigating legislators than CPI has been. New York has a terrible record of catching its political crooks and exposing corruption.

Dadey thinks that will change. He says he is content with the process that will end in JCOPE and expects the commission to work.

"There is no reason to believe at the moment that the deadline will not be met," said Dadey. "There are weeks to go. There is a strong argument for the appointments to not be rolled out in phases but announced as one. I don’t think piecemeal announcements make sense. We are not concerned, because this governor has kept to his commitments and he will keep to this one. He owns it all. All eyes will be on him. He has to make sure it is fully ready."