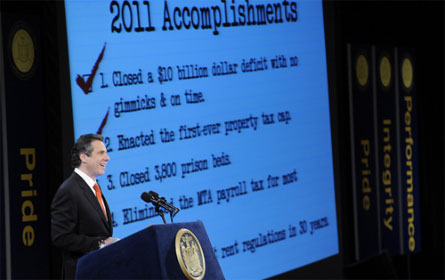 Gov. Andrew Cuomo had a big freshman year—so big, in fact, that some observers have wondered how he will replicate it. On Wednesday, Cuomo used his State of the State speech to try to set the agenda for the upcoming legislative session, while focusing on the spirit of bipartisanship that allowed him the successes he enjoyed in 2011.

But Cuomo’s plan was not particularly cohesive it contained many different, projects, plans, agencies, initiatives and task forces. While Cuomo repeated the mantra “jobs, jobs, jobs,” it was hard to pick up one cohesive message.

Here is what the governor had to offer:

Cuomo unveiled a plan to consolidate all of New York’s capital projects under one organization in an effort to rebuild the state’s crumbling infrastructure. He spoke of an “energy highway” that would connect energy suppliers to the areas of the state that most need it, he discussed forging a new emergency response system across the state, he brought up election reform and he unveiled an agency that is tasked with protecting tenants.

In terms of major economic development, Cuomo introduced a plan that would build the biggest convention center in the country, to be located around the Aqueduct race course in Queens, while turning the Javits Convention Center into a mixed use facility. He insisted that the state must pursue casino gambling. He also found a new interest in education, declaring that he was taking on a second job as a lobbyist for the students. He also pushed for a new pension tier to the dismay of labor groups.

But what Cuomo didn’t mention in his speech was as interesting to some as what he did say. Missing from the delivered speech were references to two of the most controversial issues facing New York State today: his stance on the practice of hydraulic fracturing and how he plans to address the redistricting process.

The focal point of Cuomo’s convention center would be the Aqueduct Racino in Queens. Cuomo said the planned center would be bigger than Chicago’s McCormick Place and have around 3,000 hotel rooms. The project would take $4 billion in private investment and be built by Genting, the Malaysian company that built the racino. The proposal was a big hit with a number of city representatives. Sen. Jose Peralta said he thought the idea would be a major boost for Queens and said he hoped to see a number of people from Queens involved in the process. “I fully and wholeheartedly support the idea of building the country's largest convention center in Queens,” said Peralta. “I will work with Governor Cuomo and help however I can in making this vision for the Aqueduct Racetrack venue a reality.”

Brooklyn Borough President Marty Markowitz was also enthused. “I say bravo to the proposed convention center in Queens—even if it can’t be in Brooklyn, it’s about time,” said Markowitz in a statement. Markowitz also praised Cuomo’s push to legalize casino gambling, saying he thinks Coney Island would be a natural fit for it.

Manhattan Borough President Scott Stringer also backed the convention center plan. “New York City deserves and must have a convention venue that is spacious and modern enough to accommodate international trade shows and conventions, and I look forward to working with the governor to ensure that we continue to attract top-flight conferences from around the globe. We must also find ways to breathe new life into the site of the Jacob Javits Center on Manhattan's West Side,” said Stringer in a statement.

The Alliance for Quality Education released a statement rebutting Cuomo’s remarks before he had even delivered them. “If Governor Cuomo intends to be an effective lobbyist for every school child across the state his budget will incorporate the New York State Board of Regents call for fairness and equity in our schools by prioritizing funding to high needs schools,” said Nikki Jones, communications director for the Alliance for Quality Education in a statement. “In his first year, it was Governor Cuomo’s budget that failed to represent students’ educational needs by slashing 11,000 teaching positions and cutting arts, music, after school and college prep courses.”

Cuomo dedicated a small portion of his speech to advocating the passage of public financing of elections. Cuomo invoked the city’s system as a model for the state to follow. "New York City's public financing system provides a good model for statewide reform. The system has helped to increase the number of overall contributors--and especially the number of smaller donors--in city elections," he said. Good government groups were quick to praise Cuomo.

“We are extremely pleased that Governor Cuomo has prioritized the need to reform the state’s broken campaign finance system,” said Bill Mahoney of New York Public Interest Research Group in a statement. “When the number of New Yorkers who contribute to political races is less than those living in prison, it is clear that a system such as public financing is needed to encourage candidates to reach out to a broader group of residents."

Citizens Union, which is the sister organization to the Citizens Union Foundation, which publishes Gotham Gazette, was also quick to praise the move, saying: “Campaign finance reform has long been seen by Citizens Union as fundamental to changing the culture in Albany.”

But the good government groups were largely silent on the fact that Cuomo did not mention his stance on redistricting during the speech. Redistricting is seen as perhaps the issue of the moment right now in Albany, as Legislative Task Force on Research and Reapportionment is set to reveal its district lines. Cuomo’s promise to veto unfair lines was part of his written speech but not part of his delivered remarks. Journalists were quick to note that the line was left out of the delivered remarks, but representatives of good government groups seemed unconcerned. Dick Dadey, executive director of Citizens Union, quickly responded to Liz Benjamin of Capital Tonight on Twitter when she pointed out the omission. "But that doesn't mean reform won't happen. Just watch,” tweeted Dadey at Benjamin.

Cuomo’s failure to mention hydraulic fracturing in his remarks seems to be taken by those with vested interests as a win for environmental groups that oppose the controversial practice. “While Governor Cuomo deserves credit for laying out a formula for leveraging economic growth by investing in the state’s energy infrastructure, it was disappointing that he did not define where New York’s abundant supply of clean-burning natural gas fits into the equation,” said James Smith of the Independent Oil and Gas Association in a statement. The New York Water Rangers hesitantly took the omission as a good sign for their cause. “The New York Water Rangers hope this omission signals that he is heeding the call of tens of thousands of New Yorkers to slow the rush to drill, that his support for fracking is waning, and that the oil and gas industry's siren song regarding its economic benefits is no longer as alluring,” said Erica Ringewald in a statement. “In the Governor's written remarks, he indicated that, given the ongoing review of impacts and large number of public comments, no decisions have been made to permit fracking.

Cuomo spent a major portion of his speech talking about rebuilding New York’s infrastructure, talking specifically about creating an entity to oversee all of the state’s capital projects and putting people to work rebuilding the state’s roads and bridges. But city-based transportation advocates did not hear what they were hoping for on funding for public transportation. “The State of New York’s public transit is poor,” said Paul Steely White, Executive Director of Transportation Alternatives in a statement. “From Buffalo to Brooklyn, New Yorkers are losing affordable public transit options because of the fare hikes and service cuts that are the result of a chronic lack of transit funding. To protect businesses and jobs in this state, Governor Cuomo would do well to consider the millions of businesses around the state that are wed to transit.”

“While the Governor is right to call for greater investment in infrastructure, Albany cannot continue to give short shrift to funding transit across our state,” said White. “Public transit projects create a jobs dividend that stretches from the five boroughs to Upstate New York. From manufacturing jobs in the North Country to construction jobs in the metropolitan area, fully funding public transit not only helps get millions of people to work every day, it creates good-paying jobs for New Yorkers.”

The convention center wasn’t the only thing Cuomo brought up that had to do with the five boroughs. Something that very likely got the attention of Mayor Michael Bloomberg was Cuomo’s insistence that the city must stop fingerprinting people who want access to food stamps. Cuomo echoed what advocates have been demanding for years. "For all of our progress, there are still basic wrongs to right. There is never an excuse for letting any child in New York go to bed hungry. We must increase participation in the food stamp program, remove barriers to participation, and eliminate the stigma associated with this program. And we must stop fingerprinting for food."

Cuomo’s announcement of a Tenant Protection Agency made a number of legislators hopeful that the administration is paying attention to tenants’ issues. Sen. Jose Peralta said he was excited by the prospect of the agency, but the only details he had were that “They created it.” He hopes to hear more soon.

"Too many tenants have been abused for too long, and it stops now," Cuomo said. The agency will be housed in New York State Homes and Community Renewal. It is charged with proactively enforcing “landlord obligations” and imposing “strict penalties for failure to comply with New York's rent laws," Cuomo said.

But That Isn’t All

Cuomo previewed what is sure to be a major battle between his administration and organized labor when he discussed pension reform. Cuomo said a new pension tier would affect only future hires. A number of labor supporters noted that those future jobs will be getting the unemployed back on track and should be quality jobs with benefits that will bolster the middle class. Civil Service Employees Association president Danny Donohue was not pleased with Cuomo’s focus on a new pension tier. “I am frankly surprised that the Governor gave such high priority to a new pension tier, with emphasis on immediate impact. A Tier V was only recently enacted and will not provide the state and localities with any significant savings for many years. A Tier VI would be no different and would only mean that working people would have to work longer, pay more and benefit less â€“ hardly in keeping with the Governor’s goal of strengthening the middle class,” Donohue said in a statement.

Meanwhile, the Green Party and Hunger Action slammed Cuomo for ignoring the needs of lower income families. "Governor Cuomo’s agenda for 2012 is designed to maintain the power and wealth of the 1%, promoting austerity rather than prosperity for the vast majority of New Yorkers,” said state co-chair Howie Hawkins."

While Mark Dunlea of Hunger Action applauded Cuomo’s stance on fingerprinting for food stamp recipients, he said he didn’t hear much else to be happy about. "It was encouraging to at least hear the word hunger in the Governor's address. But the harsh economic reality that many low and moderate income New Yorkers face was largely ignored, and even on his limited proposals we need to see the details," noted Dunlea. "Certainly missing in any sense that the Governor has a real jobs program to restore the 500,000 jobs we have lost since 2007. We need a public jobs initiative that is going to provide real jobs, especially in low-income neighborhoods, and communities of color."