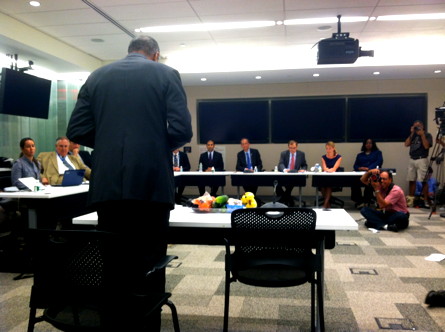 Photo of man testifying at Board of Health hearing by Nina Goldman.

NEW YORK -- The trendsetting public health initiatives that Mayor Michael Bloomberg has successfully pushed -- smoking bans in restaurants, bars and public places, as well as health inspection ratings -- have been picked up across the country by dozens of other cities.

If beverage makers and retailers have their way, the Bloomberg administration's next big idea to limit the size of sugary drinks sold to no more than 16 ounces won't have that much fizz. What's at stake for them is not merely consumer choice but the possibility that the soda ban will start a trend that will sweep through the country.

"The New York City battle is the industry’s finger in the dyke,” said George Hacker, senior policy advisor for the Center for Public Science in the Public Interest.

Yesterday, the mayor-appointed Board of Health, which will make the decision on whether to pass the regulation, held its only public hearing on the proposal that would apply to any outlet that requires a health inspection by the city.

About 60 people spoke at the hearing held at the Department of Health in Long Island City, Queens. Eight out of 11 board members were present.

As was expected, several health experts and representatives of community organizations testified that soda is playing a large role in the obesity epidemic in America.

Several elected officials, including Council members, expressed their indignation about the decision to pass the far-reaching legislation to an unelected administrative body.

Beverage industry supporters said the plan would strip them of their freedom to choose.

Before the hearing began, Health Commissioner Thomas Farley said the proposal was "at its core" about the health of New Yorkers.

He sid if a virus was killing as many New Yorkers this year as are killed by obesity every year, people would be clamoring for government intervention. "Sugary drinks are the leading cause of the obesity epidemic in New York City,” he said.

Farley said that the limit is not restricting anyone’s rights because it still allows New Yorkers to drink as much as they want â€“ it just limits the sizes available to them.

He said the initiative would be enforced during health department inspections and violators would face a $200 fine.

During the hearing, New Yorkers for Beverage Choice, which sprung up in response to the proposed regulation, said it delivered comments opposing the ban from 91,000 New Yorkers and 1,500 businesses.

Hacker said the industry is likely to pursue a number of avenues in their battle against Bloomberg’s policy â€“ a public relations campaign, swaying members of the Board of Health, legislation on the state level and litigation.

In the end, the industry might not have much choice. "They may just learn to live with the new rule and hope that it doesn't seep outside of New York City," he said.

If the Board of Health goes ahead with the ban when it votes in September, it will almost certainly face a lawsuit before it goes into affect in 2013.

Farley was asked about a possible suit at the hearing and responded: “I would hope the industry wouldn’t do that. I think that simply hurts the reputation of the industry.”

Industry experts say that although it is likely many lawsuits will be filed against the ban, it isn’t clear that any particular argument will hold up in court.

Some possible challenges could include claiming the ban is "inequitable" -- as Council members Dan Halloran and Letitia James have argued. “This is going to set up an unfair competitive advantage,” James told the Gazette.

Farley argued at the hearing that the industry wouldn’t face any drastic cost increases, because the move from 20 ounces to 16 ounces is a small one and that small restaurants and eateries don’t generally serve drinks over 16 ounces.

Another argument could be that the ban violates the Constitution’s Commerce Clause that prohibits states from taking action that can hurt interstate commerce. Large soda producers could claim they are hurt by the ban.

The city's Law Department said the Board of Health was well within its authority to set the new regulation.

"The Board of Health is charged with regulating all matters that affect health. Specifically, its areas of oversight include the control of chronic disease and food service establishments,” said Chief Legal Counsel Stephen Louis. “Limiting the portion size of sugary beverages served at NYC restaurants is a valid exercise of these authorities."

The administration successfully defended challenges to its policy that banned smoking in bars and that required chain restaurants to post calorie counts in their menus. However, the administration recently lost a legal battle over graphic signs designed to show the health effects of smoking.

Michelle Simon, a public health lawyer who runs the blog “Appetite for Profit," said in the short term the beverage industry is relying heavily on public relations.

“I think the broader strategy is to send a message to other cities: "Don’t even think about this or you will be next target of ridicule," she said.

She said other cities are likely to wait and see what happens with the lawsuits against the soda ban before they more forward with similar plans, just as they did with the calorie labeling initiative that Bloomberg helped pioneer.

"Not many other mayors have the luxury of not worrying about their popularity," she said.

City Council members, including Halloran, are consulting with members of the state Legislature for ways to override the measure.

Attacking the issue on the state level could give the American Beverage Association a shot to do what the beverage industry has so far failed to do on the city level, where it has poured a small fortune into advertising campaigns to motivate city residents to voice their opposition to the ban.

The ABA, however, has had success pouring on the lobbying dollars and influencing policy in Albany. The ABA spent $12.9 million in 2010 to successfully defeat then-Gov. David Paterson’s proposed tax on sugary beverages.

State elected officials have been cautious about taking up the cause of the beverage industry.

“We may be getting to close to Big Brother,” Assembly Speaker Sheldon Silver was quoted as saying in the New York Post in June, but he quickly walked back the statement saying addressing Bloomberg’s soda ban was not a priority for the Legislature.

When Gov. Andrew Cuomo was asked about it in June on a radio show, he noted a basic support for fighting the obesity epidemic.

When asked if he would veto any attempts by the Legislature to undo the ban Cuomo said there wasn’t much point in interfering because Bloomberg’s successor will be able to review the initiative. “Then, if people really object to it, the next mayor can just undo it. I don’t think you can do a lot of harm in the interim.”