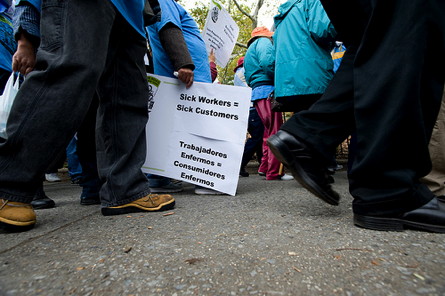 NEW YORK — In the late 1970s and early 1980s, when Democrat Tom Cuite was at the helm of the City Council, he made sure the city's landmark gay rights bill was killed in committee nearly a dozen times.

I was involved in the 50-group, all-volunteer Coalition for Lesbian and Gay Rights at the time, and we demanded the sponsors of the Council bill force a vote on it, even if the bill might lose, to get them on the record.

When the speaker of the City Council refuses to schedule a vote on a bill, the lead sponsor has the right to file what is known as a discharge motion with seven others to bring it to the Council floor for a full vote by their colleagues.

But it might as well be the nuclear option, because most sponsors and advocates run for the fallout shelters when asked about whether they would consider standing up to the leadership.

“Cuite punished members who defied him by going so far as to withhold mail from them, but the ones who stood with us believed civil rights were more important than personal perks,” said Allen Roskoff, who worked on the gay rights bill since it was the first in the nation to be introduced in 1971 at the behest of the Gay Activists Alliance.

No discharge motion is known to have passed the Council, with some members in past Councils claiming that even though they supported the legislation they were voting no because they opposed bypassing the committee system.

The gay bill finally passed in 1986 when Peter Vallone, Sr., became majority leader and let it go to the floor despite his personal opposition to it in a deal he made with Council Member Robert Dryfoos, a supporter of the bill, who betrayed the Manhattan delegation to vote for Vallone as leader over Sam Horwitz, forever earning Dryfoos the nickname “Benedict Bob.”

Today, it is difficult to see how such a coalition of activists and Council members might come together to force a vote on the bill that would require some employers to grant sick leave to employees with Speaker Christine Quinn implacably opposed to the legislation. After all, this Council has never used a discharge motion under her tenure.

How Can a Bill with 36 Sponsors Not Come to a Vote?

The sick-leave bill (Intro 97-A) has a more than veto-proof majority of 36 City Council co-sponsors â€“ just 34 are needed for a two-thirds override of the mayor’s promised veto of the bill. But the legislation has languished without a vote because of the opposition of one member, Quinn, and the refusal of her members to contradict her. She shelved the bill in 2010, telling the New York Times it “threatens the survival of small-business owners.”  The 36 sponsors didn’t say boo to her blocking the bill and, while some of the advocates wailed at the time, none demanded a discharge motion.

While Quinn does not have the legal power to stop a bill from coming to the floor, her fellow Council members have been astoundingly silent — or evasive — when it comes to discussions about asserting their right to bring a discharge motion.

I asked a few Council members at an August 22 religious rally for the sick paid leave bill on the steps of City Hall why they weren’t using the power of discharge.

Councilman Robert Jackson dodged the question. “It’s not my bill,” he said, though he is a sponsor. He added that it “hasn’t come up” in their strategy meetings to get the bill passed.

Would there be consequences for him if he did support a discharge motion? “I don’t know,” he said.

Councilman Jumaane D. Williams (D-Brooklyn), considered one of the more independent members of the Council, said, “I don’t have an answer. It’s a good question. But nobody’s asked us for that.”

Councilman James Sanders, Jr. (D-Queens), who chairs the economic development committee in which the bill has been heard and stalled, said he could not give me a “good reason” why there has been no committee vote and that any request for discharge would have to come “from the prime sponsor,” Councilwoman Gale Brewer.

At the same rally, Brewer would not answer questions about whether she would consider using her power to bring a discharge motion.

Critics fear that as Council members negotiate the bill, it will be tempered, much in the same way that living wage legislation was made more palatable for the business sector before it was allowed by Quinn to come to the floor.

Roskoff, a longtime critic of Quinn’s leadership and closeness to Mayor Bloomberg, issued a statement on behalf of the Jim Owles Liberal Democratic Club, where he is president, demanding that Brewer bring a discharge motion on the bill or for supporters of the bill to select a new lead sponsor who will.

“If Council members are not willing to stand up to the speaker for what they allegedly believe in, we might as well dispense with having a City Council entirely and save the city a lot of money,” he wrote in an August 27 statement.

Where Are The Advocates?

Most advocates for the bill would not answer direct questions about whether the option of demanding a discharge motion has even been discussed.

“At this point, we have not viewed it as a viable mechanism. That’s what I’m saying in August. It may not be our position in two months,” said Martha Baker, a leader of the New York State Paid Family Leave Coalition.

Instead, Baker said they were “trying very hard” to work with Quinn.

“She has the power to bring the bill to the floor. History tells us that discharge is not usually the most effective way,” Baker continued.

Groups such as the Working Families Party and the Community Service Society have been bombarding their members with pleas to call on Quinn to schedule a vote, but in the face of her continued resistance to the legislation they are not demanding that Council members bring the bill to the floor themselves through discharge.

“It is time for Speaker Quinn to heed the calls coming from all directions, and bring paid sick days legislation to the floor for a vote,” said David Jones, president of the Community Service Society in a release, but his group would not provide their stance on a discharge motion.

Working Families also would not answer the question on discharge, emailing this statement: “The proposal has been crafted in consultation with small business owners, and we're asking Speaker Quinn to allow a vote on the City Council floor. Speaker Quinn has a long history as an advocate for working people and as a supporter of public health, and we're optimistic that we'll get a vote on the floor, with her support.”

While Quinn’s office said that no discharge motion has been brought during her tenure, Councilman Charles Barron (D-Brooklyn) said he was part of a group that gathered the signatures from sponsors to bring a discharge motion on a bill relating to voting machines and the speaker’s office responded by releasing the bill from committee.

Barron seems to be alone among Council members in his willingness to take Quinn on over her leadership; he said he has paid for it by being removed as chair of the council committee on higher education.

“There is no democracy in the City Council,” he said. “It is the dictatorship of the Speaker” — something he knows something about as the man who hosted a Council reception for Zimbabwean dictator Robert Mugabe, though Barron regards him as a “liberator” — which indeed he once was.

“Members are afraid to assert their own power,” Barron said of his colleagues. “They fear the speaker who they give too much power. Nothing in our rules says that she controls capital money and expense money, but they let her determine how much we get. Funds are not distributed based on the need of impoverished communities. They go to the Council members who go along, get along, and do the speaker’s bidding. She determines what committee assignments we get and whether we get to chair a committee.” He said he has his own way of bringing resources to his district by negotiating directly with city agencies.

Of the advocates who are not demanding discharge, Barron said: “All of them are afraid to confront the speaker because they have other deals in the pipeline.”

Barron wishes his colleagues would stick together on issues that are supposed to be their highest concerns, particularly matters of economic justice. “She can’t punish all of us. If the majority of us said no to her, we win.” He “guarantees” the sick-leave bill “will be watered down the way the living wage bill was.”

Indeed, despite the fact that the bill as written has 36 co-sponsors, Brewer has announced that she is negotiating changes in it. In her latest email newsletter, she wrote: “We are working to address the concerns of business owners who have legitimate concerns about the language in this bill.”

Mayoral politics are a factor here. “It is obvious to us that from what I read, there are powerful interests in the city who would support the speaker for mayor and don’t support this bill,” Baker said. “That has to have an effect. Other folks who are running for mayor — de Blasio, Stringer, Liu, Thompson — everybody appears to be in support except the speaker”

Several Council sponsors of the bill who I have often gotten comments for my stories in the past would not respond to calls for comment on the question of bringing a discharge motion — including Daniel Dromm (D-Jackson Heights), Rosie Mendez (D-Lower East Side) and Daniel Gorodnick (D-East Side). None of them returned calls or emails.

When I reached out to Quinn’s office, I received no response to the charges of her critics.

While the New York Post and New York Daily News editorialize that Quinn should hold firm in stopping the bill, The New York Times wrote that Brewer and Quinn “should be able to find a workable compromise” on the bill that they say Quinn supports “in principle.” The fact that 36 sponsors will not bring the bill up for a vote on their own raises not just the question of their independence as representatives, but whether they were just putting their name on a bill that they do not truly support and were counting on Quinn to kill or amend.

“It is time for all City Council members to stand up for what they say they believe in and pass this bill intact. A discharge motion is rarely used in the Council, but it is the only hope the bill has of passage in its current strong form,” Roskoff said.