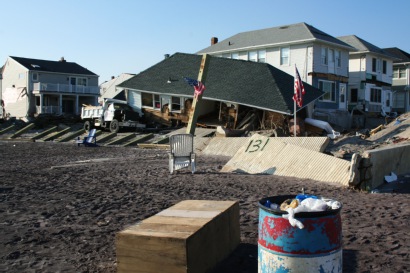 FAR ROCKAWAY, Queens — Weeks after floodwaters from Superstorm Sandy inundated his three-story home in Far Rockaway, Vern Clarke is pulling out the sheetrock and insulation from the walls of the first floor in a desperate bid to stop the spread of mold throughout the structure.

"I can't wait for anybody to do it," said the father of five. "The longer you wait, the worse the situation becomes."

Public health experts, volunteers and residents are sounding the alarm about mold that is rapidly growing in homes that were flooded by Sandy, saying it could pose a potential health hazard for families who have nowhere else to go.

And experts say the problem could get much worse as colder winter weather closes in and power is restored to more homes that haven't been fully dried out.

Jack Caravanos, a professor of environmental health at the City University of New York who has been visiting homes in the Rockaways to evaluate the problem, said the combination of heat and moisture are ideal conditions for a mold explosion.

"If the area is not completely dried out, mold will take off," he said. "And here's what's interesting with mold — it can cause asthma â€¦ It can exacerbate asthma â€¦ Being exposed to mold can make it worse and trigger an attack."

Greater NYC for Change, a 6,000-member activist organization that sprung from the 2008 Obama campaign, has started a petition on Change.org calling on government officials to deploy temporary housing — possibly including FEMA trailers or Red Horse Squadron tents — to help people get out of their flood-damaged, mold-infested homes. The petition has over 11,000 signatures.

There are currently few housing alternatives for those whose homes were damaged in the storm — the hotel vouchers provided by the city put Rockaways residents far away from their jobs, leaving them with an untenable commute, and shelters can be difficult environments for families.

Advocates said they are increasingly frustrated by what they see as willful apathy toward the problem of mold and the lack of housing alternatives.

Ret. Army Col. John Hoffman, who has been advising a number of emergency response groups in the Rockaways, said temporary housing would alleviate a number of problems.

“We are having issues distributing hot meals and getting medical care to people. Temporary housing would fix that, it would stabilize the community while homes are being rebuilt," he said. "In a lot of cases, the mold is not going to go away overnight. People will need places to live â€¦ These requests for temporary housing have fallen on deaf ears.”

State Sen. Joseph Addabbo, whose district includes the Rockaways, said FEMA and city officials are considering a plan to lease empty apartments to house residents who are either displaced or living in unsafe conditions due to the storm.

“Thirteen thousand residents in the Rockaways are without power,” Addabbo said on Friday. “There is no question the goal is to find temporary housing.”

He said FEMA trailers "aren't ideal" and that the federal agency has been trying to balance "cost and safety." “They are finding that area hotels are booked or have tripled rates," he said. "But there are hundreds of empty apartments in the Rockaways that FEMA is looking at.”

Clarke said FEMA sent someone to check out the damage to his home, but that his family was not offered housing assistance. "Well, the gentleman came in to do the interview," Clarke said. "There was mold already on the baseboard. He said, yeah, this is no place for the family and kids to be ... But we got denied for help."

In the days after the storm, St. Francis de Sales Parish, in the Belle Harbor neighborhood of the Rockaways, has become a refuge for storm weary residents.

In the lot across the street from the church, only a couple blocks from the beach where some houses were shredded and others were thrown off their foundations, tents have been set up to provide emergency assistance. During a recent visit to a heated tent where free hot meals were being served, dozens of dusty laborers, some with masks propped on their heads to eat, were gathered alongside residents.

Dennis Saleeby, volunteer field operations director for New York Resilience System, said he has seen people developing coughs and becoming ill and points to mold and other contaminants. “The particulates, the mold and asbestos are creating a toxic environment,” he said.

Saleeby and a number of other regular volunteers were shocked by recent comments made by the city's assistant health commissioner, Nancy Clark, to WABC-TV.

"We are monitoring emergency room visits and hospitalizations for illnesses, respiratory illnesses and to date we've not seen an up-tick but we continue to monitor," Clark said in the interview.

Saleeby said people who are living in conditions surrounded by mold aren’t likely to go to an emergency room.

“That is a very reactionary response to a health crisis," he said. "How many people in the Rockaways see private doctors, go to clinics or are too poor to go to the emergency room?”

Perhaps in a nod to the growing concern, the city’s Department of Health sent two staff members on a fact-finding trip to the Rockaways, a spokeswoman for the department confirmed. She would not provide details. Caravanos, who was with the team, said that the Occupational Safety and Health Administration also sent someone along on the trip Thursday.

Caravanos said it was difficult to pinpoint one health problem as being caused by mold. "Some people have irritation, upper respiratory respiration, cough, headaches, malaise â€¦ A mixed bag of symptoms that may or may not be mold specific but can be," he said.

The good news, he said, is that so far what he and others have seen amounts to "pretty much ambient mold" — such as penicillin and aspergillus — that can affect people who are susceptible, such as those with asthma and allergies.

But he said that more toxigenic molds, such as stachybotrys, could be looming on the horizon if homes are not dehumidified properly — and that could be more problematic. "Those molds will cause disease in just about anyone exposed," he said.

A growing body of literature exists on the health effects of mold, especially among vulnerable populations, including children and those people more susceptible to respiratory illnesses.

A 2004 study from the Institute of Medicine found that epidemiological studies "indicate there is sufficient evidence to conclude that the presence of mold â€¦ indoors is associated with upper respiratory symptoms, cough, wheeze, asthma symptoms in sensitized asthmatic personsâ€¦"

The association between mold and upper respiratory symptoms was a focus of concern in post-Katrina New Orleans, where the subject has been studied extensively.

And, as in New Orleans, activists and public health experts like Caravanos are moving aggressively to try to educate about the potential hazard of mold and the need to dehumidify buildings.

Alison Thompson, another volunteer coordinator and a longtime disaster responder who has been working out of a trailer on the St. Frances lot, said lessons from Katrina and from the toxic dust at the World Trade Center should be applied in the Rockaways.

“They’re saying it’s totally fine out here. It’s hard to believe that,” she said, adding that she had been visiting homes and finding a host of people complaining of respiratory problem.

One group that formed to respond to the problems caused by the storm, Respond and Rebuild, had planned to hold two mold clean-up community presentations in the Rockaways and Coney Island.

Caravanos was among the speakers, along with Guillermo Olivos, described in a flier as a “leader of mold remediation for recovery groups” following Hurricane Katrina, and Jolanta Kruszelnicka, described as an industrial hygienist on her LinkedIn page and as an adjunct professor at the Long Island University School of Public Health.

In recent days, Mayor Michael Bloomberg has been touting the city's Rapid Repair program, set up by his office, to provide free emergency repairs to help residential property owners affecting by the storm to restore heat, water and electricity.

"NYC Rapid Repairs teams will visit any storm-damaged house that is structurally sound, provide a free assessment of what needs to be done to get basic services restored, and then do the work for free," he said in his weekly address on Nov. 25.

But the program doesn't deal with mold. “They are taking out sheetrock and other flood damaged material, but they are not in the mold removal business," Addabbo said.

Caravanos said he and other public health experts were trying to change that. "They are leaving you with a moist house ready to ferment," he said of the Rapid Repairs program.

The mayor's office didn't respond to an emailed request for comment about mold remediation efforts and the Rapid Repair program.

But without city or federal help, landlords and homeowners are left to deal with the mold problem themselves. But often landlords aren’t equipped to deal with mold damage and, in some cases, the damage is so extensive residents shouldn’t expect to be back in livable apartments anytime soon.

There are also plenty of people out there looking to make a quick buck and ready to pose as mold remediation experts — a possibility made easier by the fact that there is no state licensing requirements for anyone to say they are.

In the immediate impact of Hurricane Sandy, Brandon D’Leo and the surf club he works out of in Queens had a distinct purpose: help as many people as possible.

“We got together and just sent people through the neighborhood to canvas and find out what people needed," he said. “We sent out crews of volunteers to dig people out and do demolition.”

Now D’Leo says “things have really changed” — but not for the better. Thanks to long festering mold in houses that have been without heat for weeks, it isn’t as simple as sending volunteers out to tear out a water-soaked interior. “At about three-and-a-half weeks in, we couldn’t send people into those conditions any more because of the mold," he said. "It is just irresponsible."

D’Leo said he is acting more as an intermediary — sending volunteers to organizations that are properly outfitted to handle toxic mold.

Clarke, the resident who had stripped his first floor to deal with the mold, said it had been two weeks since a crew from the Rapid Repair program had come by.

In the meantime, as he awaits their return, he said he is going to have to pull out the kitchen cabinets and the stove and keep working toward fixing up his house so that his family can get back a sense of normalcy.

"Everybody is just trying to hang in there," Clarke said. “It's not a comfortable situation. It's not a happy situation. it's just a situation where you're making things work day by day."