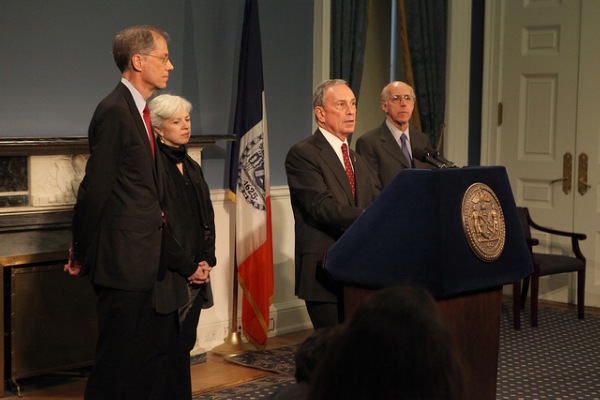 NEW YORK — Mayor Michael Bloomberg is far from accepting the bitter taste of defeat after a judge barred his administration from putting into practice its signature ban on large sugary drinks.

"We believe that the judge's decision is clearly an error and we will prevail on appeal," Bloomberg said in a press conference hours after state Supreme Court Judge Milton Tingling ruled against the policy on Monday.

The limit on sugary beverages larger than 16 ounces, which was supposed to start on Tuesday, would have applied to any vendor that was inspected by the city’s Department of Health. But the rule had gaping loopholes: While it might apply to most restaurants, chains like 7-11 would still be able to sell wondrously large drinks because they are not regulated by the DOH but instead by state authorities. The rule also would not have applied to alcoholic drinks, or any drinks with more than 50 percent milk. And refills also would not be limited.

Recognizing the loopholes, Tingling called the limits “arbitrary and capricious.” In his 36-page decision, the judge said that the mayoral-appointed Board of Health, which promulgated the rule, had overstepped its authority as an administrative agency of the executive branch.

The City Charter, the judge wrote, does not grant the BOH the sweeping and unbridled authority to define, create, authorize, mandate and enforce the so-called “soda ban.”

"The rule would not only violate the separation of powers doctrine," Tingling wrote, "it would eviscerate it. Such an evisceration has the potential to be more troubling than sugar sweetened beverages."

Instead, he implied that such a sweeping mandate should be taken up by the legislative branch.

Bloomberg, who said his administration would not pursue any action through the City Council, argued that Tingling's decision is only the latest in a string of lower court rulings that would not stand upon appeal.

"There are many, many instances where a lower court decision has gone against us and then been reversed," the mayor said. "If lower court rulings had always stood, Grand Central Terminal would have been knocked down forty years ago."

One reporter asked Bloomberg at tonight's news conference if the recent string of court upsets against the Bloomberg administration shows a trend of overreach. Specifically speaking on court rulings on the city's restrictions for single adult homeless shelter eligibility and the mayor's taxi medallion plan, Bloomberg responded that the city would win on appeals.

The city’s Law Department said it was “confident” the rule would stand on appeal. “This measure is part of the City’s multi-pronged effort to combat the growing obesity epidemic, which takes the lives of more than 5,000 New Yorkers every year, and we believe the Board of Health has the legal authority – and responsibility – to tackle its leading causes.”

The lawsuit was brought against the city by a coalition of business groups, unions, merchant associations and beverage makers, who acknowledged the problem of obesity, the judge wrote in the decision. But he said the groups argued  “the link between sugary drinks and obesity are not as clear” as the city has asserted.

One of the groups that sued the city over the limits, the American Beverage Association, said in a post on its website applauding the judge’s decision that “the court’s decision upholds a principle that most of us believe in — freedom of choice.”

Democratic Councilwoman Letitia James of Brooklyn has been a vocal opponent of the mayor's ban on large sugary beverages from the get-go, and said she was pleased with the judge’s ruling.

"The mayor overstepped his executive power by not securing a vote in front [of] the City Council or the state Legislature," James said.

She said that the city's decision to appeal is par for the course, and creates more opportunity to debate the subject.

"It's not over yet," James said. "So continue to drink your Big Gulp."