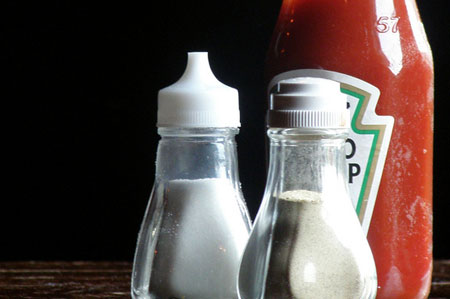 (Earlier this month, the Bloomberg administration announced a new initiative aimed at encouraging food processors and restaurants in New York and across the country to cut back on salt in the foods they sell. This is the first of two commentaries on the move. Another, opposing the plan, appears here..)

The National Salt Reduction Initiative, a New York City-led partnership of cities, states and national health organizations, has announced its proposed targets for a voluntary reduction of salt (sodium) levels in packaged and restaurant foods. The goal of the initiative is to reduce the salt in packaged and restaurant foods by 25 percent over five years -- an achievement that would reduce the nation’s salt intake by 20 percent and prevent many thousands of premature deaths as well as countless hospitalizations for people with heart and kidney disease. Success would translate into major public health benefits in the U.S.

Using data derived from the 1988-91 National Health and Nutrition Examination Survey, the average dietary sodium intake for adults in the U.S. is estimated at 3,400 milligrams per day, with similar amounts for all races and ethnic groups. This estimated average, however, does not include discretionary sodium use, such as using salt when cooking or at the table. This discretionary sodium use is estimated to increase the average daily intake by about 15 percent. This means that the average American adult ingests almost 4,000 milligrams of sodium daily, a level that is way above the recommendation of the National Research Council that the average adult American consume no more than 2,400 milligrams of sodium per day.

This study did not find a significant association between dietary sodium intake and risk of cardiovascular disease in people who were not overweight . However, since approximately 70 percent of U.S. adults are either overweight or obese -- with that proportion increasing steadily -- the data on risks for overweight people are very relevant to our population.

The statistics bear out what we know medically. High sodium intake increases blood pressure and that in turn increases risk for these blood vessel diseases. Importantly, the large INTERSALT study has shown that lowering sodium intake by 2,300 milligrams a day, from about 3,800 milligrams to about 1,500 milligrams correlates with a 3 to 6 mm Hg reduction in systolic blood pressure. Even a 3 mm Hg reduction for the general U.S. population should result in 11 percent fewer strokes, 7 percent fewer coronary events and 5 percent fewer deaths, reducing the number of heart attacks and strokes by approximately 126,000 a year and deaths by 44,000.

A 1999 statement by the National High Blood Pressure Education Program of the National Heart, Lung, and Blood Institute concluded that a clear causal link between dietary sodium intake and blood pressure exists. The group of scientists also stated that the evidence for this relationship is sufficiently strong to warrant a specific recommendation about reducing dietary salt intake. The American Heart Association and American Medical Association have also called for reducing salt intake.

As with transfats, which New York City banned in restaurants in 2006, people do not go to restaurants with the express purpose of eating more salt. In the vast majority of cases, most people will not even miss the extra salt.

Millions of Americans live with congestive heart failure and kidney insufficiency. For them, excess sodium intake can result in life-threatening and costly hospitalizations. Despite this, food processors and cooks continue to add unnecessary salt to food, making it more and more difficult to obtain a low-salt meal at most restaurants without considerable effort. Many people with heart or kidney problems cannot experience the enjoyment of eating out because of the relatively high salt content of many restaurant foods.

The New York City-based initiative to reduce salt consumption by working with the food and restaurant industry warrants implementation immediately. Just as restrictions on smoking in public places have led to major health benefits, this initiative should have a similar impact on health without detrimental impacts on the food economy or on the delight people take gain from eating at their favorite restaurants. This is also a very cost-effective approach that is consistent with current efforts taken in Washington and individual states to improve the nation’s health without increasing our national debt.