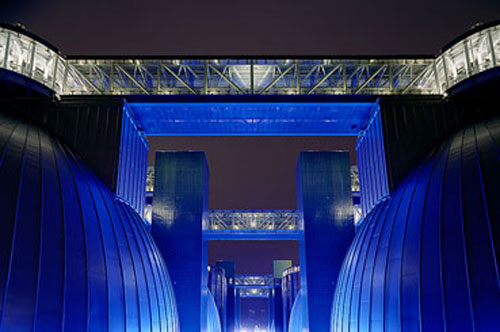 Photo (cc) 2008 Department of Environmental Protection
The digester eggs at the Newtown Creek Wastewater Treatment Plant -- one of the city's many capital projects.

New York City, you have a problem.

Yes, like the thousands of shopaholics or compulsive credit card users, you have racked up some serious debt. And now some advocates want to cut you off.

During the first two terms of the Bloomberg administration, the city's capital budget ballooned from about $24.8 billion to $45.5 billion -- an increase of more than 83 percent. In that same time period the amount of money the city paid in debt service every year increased from $2.4 billion to $5.4 billion. In the mayor's $63.6 billion budget proposal for fiscal year 2011, nearly 9 percent is dedicated to paying off the city's capital debt.

And it doesn't stop there. By fiscal year 2014, the city could be paying about $6.9 billion in debt service.

For years, Mayor Michael Bloomberg has bragged of his commitment to capital investment. He has said he would not abandon the city's infrastructure -- in fact, he would make its renewal one of his top priorities.

Now that those investments have been made, budget experts wonder whether they were the right decisions. The size of this plan has some of them worried.

"What you see in 2010 is record high commitments," said Maria Doulis, a senior research associate at the Citizens Budget Commission, who has called for the mayor to cut back on the capital budget. "They should figure out what their priorities are and adjust accordingly."

The Bloomberg administration has made some strides in the last several years to get its debt service under control -- such as paying off debt with surplus dollars and stretching out the capital budget from four to five years.

But experts wonder whether these actions are enough.

Last week, Marc LaVorgna, a Bloomberg spokesperson, said the administration would not turn its back on economic growth. In a struggling economy, city-fueled development helps create jobs. The administration, he added, will not make the same mistakes of the 1970s era New York City -- when streets and economic development deteriorated.

Nonetheless, some members of the administration acknowledge that there is a problem and it needs to be addressed.

On Thursday at the start of the City Council's hearings on the preliminary budget, Councilmember Domenic Recchia, the council's new finance committee chairman, wondered just how big that problem really is.

"Are you requesting we reduce it more, cut the capital plan in half?" asked Recchia.

"As a practical matter, I think it's too much to deal with in the next few months," Page said of the city's rising debt. "In the long run, I think the long term cost of debt service as a fixed cost in New York City is a serious problem for us."

The current fiscal year has the largest proposed capital budget commitments in all of Bloomberg's tenure -- projected to top more than $14 billion. Funding is going to resurface 3,700 miles of roadway, at the cost of $689 million, more than $11.2 billion will go to school facilities construction and $646 million for the Newtown Creek Wastewater Treatment Plant.

While some of the overall increase during the Bloomberg administration has to do with the mayor's priorities and his commitment to updating the city's infrastructure, some of the rise originated outside of City Hall. When the state started matching the city's allocation for school construction, the department's capital allocation effectively doubled, said Doulis. The building boom also caused construction costs to spike, increasing the cost for the city's projects, Doulis added.

Beyond that, she said, the administration substantially increased funding for capital projects for parks, public buildings, hospitals and environmental protection even when adjusted for construction cost increases.

Doulis would like to see the city cut back on capital spending, though she would not detail a specific target.

Those in the construction industry, however, side with Bloomberg.

"Our infrastructure is the circulatory system of what keeps our economy moving and growing and thriving," said Felice Farber, the director for external affairs at the General Contractors Association of New York. "If we're not building it or maintaining it, it's going to cost us more in the long run."

Farber suggested the city commit to completing projects on time instead of cut capital spending. The longer a project is delayed, the more likely the cost of construction could increase, making the entire project more expensive. Nearly two years ago the city and the association agreed to a pilot program that would penalize the city if it were at fault for delaying a project. The city already penalizes contractors if they are at fault for delays.

That program, which was set back when the capital budget was cut last year, just got started in January and covers $5 billion worth of projects, according to the administration. But Farber thinks it will help keep projects on time and on budget.

More than half of the construction trade in the city is supported by city funds right now, Page said last week. With the recession, it's hard to imagine what would happen if the city started cutting capital too.