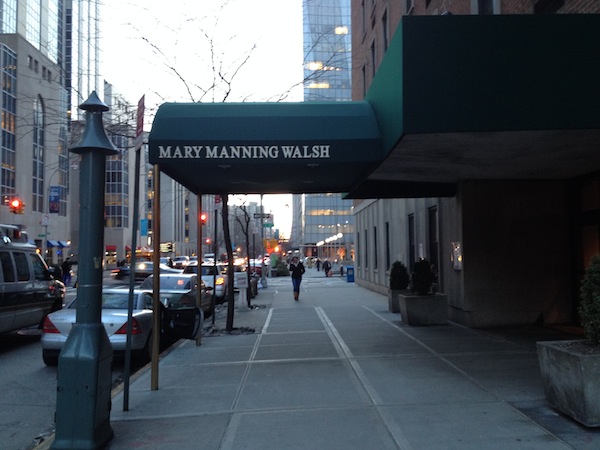 The Gotham Gazette examined inspection reports, complaints and court records to take a close look at five of the city’s lowest-rated nursing homes. This is the second of five parts.

When Wayne Padgett’s aunt ended up at the Mary Manning Walsh Nursing Home on the Upper East Side last spring, he never imagined that he would eventually need to fly across the country to rescue her.

His 86-year-old aunt, Geraldine McCandless, had been sent to recover at the nursing after being hospitalized for a stroke. Padgett was not happy with what he saw when he flew from his California home to visit her.

“When I arrived in New York, I was horrified,” he said. “The place is dirty and run down. The staff do not really care and they have attitudes against asking for help.”

To document his point about the cleanliness issue, Padgett photographed the stained carpets and walls at the facility. He also said that he saw residents left in their wheelchairs in the hall all day, lined up in front of the nursing station with nothing to do.

“They were left in the hall to rot,” he said.

The CMS gave the facility only two stars (out of five) for overall quality, whereas the average rating in the borough is four stars. The CMS equates two stars with below average care.

A higher-than-average percentage of short-term residents at the 362-bed nursing home suffer problems with bedsores, according to data compiled by the New York State Department of Health. The data show that 2.2 percent of residents at the facility have bedsores that are "new or worsened," compared to an average of 1.4 percent statewide and 1.3 percent the nationwide.

Leonard Rosner, a former patient at Mary Manning Walsh, is suing the nursing home for what he says was a failure to prevent and treat his bedsores. Nurses neglected to treat him even when his bedsores began to emit an odor.

“All you need to do is use your nose,” said Rosner’s attorney Jonathan Fairbanks, suggesting that his client’s condition was easy to detect. “In Rosner’s case, they waited three weeks before making a referral.”

In another health-related matter, Mary Manning Walsh was fined $6,500 last year for excessively hot water in the sinks in residents’ rooms. State inspectors measured water temperatures as high as 136 degrees – hot enough to blister the skin after 10 seconds of exposure, according to safety guidelines.

The hot water hazard was first reported to the administration in April 2012, but it still had not been fixed when the inspectors came to the nursing home the following year.

Other deficiencies reported by CMS and state Health Department in the past three years include errors in administering medication, failure to report medication errors and failure to store and cook food in a safe way. Inspectors also reported that 15 percent of the residents at Mary Manning Walsh exhibit symptoms of depression, compared to an average of 12 percent statewide and 6.6 percent nationwide.

Jon Goldberg, the spokesperson for ArchCare, the health care ministry for the Archdiocese of New York, suggested that the facility’s low rating by CMS is not indicative of the care it has provided in the past.

“Historically, the Mary Manning Walsh Nursing Home has had five-star ratings,” he said.

Administrators and the owners of the facility didn’t respond to several requests for an interview.

The problems at Mary Manning Walsh are indicative of the substandard quality of care prevalent in nursing homes across the state. New York ranked 45th out of all states this year in Home Report Cards, a ranking compiled by Families for Better Care, a Florida-based advocacy group.

But he added that the lack of appropriate legislation with regard to staffing levels on a state level exacerbates the problem. Unlike some states, New York has no specific staffing requirement and instead allows nursing homes leeway in deciding how many staff members they employ.

“Far too many people are left in danger,” Lee said.

In Wayne Padgett’s opinion, leaving his aunt in Mary Manning Walsh posed a danger to her health. He decided to move her into a home in California. That proved unnecessarily difficult because administrators at Mary Manning Walsh couldn’t locate such important documents as power of attorney, he said.

When his aunt was finally transferred, her new home discovered that a deep cough she had developed was a symptom of bronchitis which the staff at Mary Manning Walsh had failed to diagnose, Padgett said.

His aunt is doing better at her new nursing home, Padgett reports.

“People here are sweet and they care,” he said about the staff.

Agata Blaszczak-Boxe is a freelance journalist and graduate of CUNY Graduate School of Journalism.