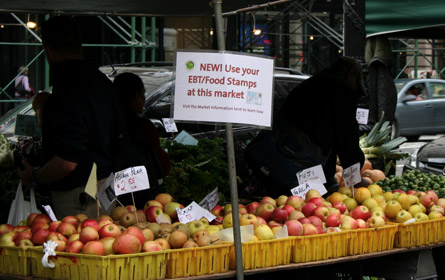 The day before Thanksgiving, many New York foodies hustle to pick up heritage turkeys and heirloom vegetables at their local Greenmarket. Meanwhile, food rescue agencies like City Harvest try to persuade the shoppers to donate a bag of produce such as apples, onions or broccoli to food pantries and soup kitchens.

The food pantries trying to help the more than 1 million New Yorkers who cannot afford an adequate supply of food must look to a variety of sources for the food they provide, and much of it originates far from the city. But that could change. A number of programs already try to give poor New Yorkers access to locally grown produce, and several local officials have proposed sweeping efforts that could bring the locavore ethos to low-income homes.

Both Gov.-elect Andrew Cuomo and City Council Speaker Christine Quinn have recently presented plans to get more locally grown food into the city and then to institutions and poor neighborhoods. If implemented, the proposals would bolster grassroots programs that make local food available to people who often have little access to fresh, healthy food, let alone locally produced fruits and vegetables.

This program encourages people to visit the markets and discover the benefits of eating fresh produce, according to Bob Lewis, who assists the state Department of Agriculture and Markets in farmers’ market development.

Lewis, who co-founded New York's Greenmarket program, said that the city has always worried whether people introduced to farmers' markets by the program could afford to continue to shop there once their coupons ran out. That led Greenmarket to install Electronic Benefits Transfer machines to allow shoppers to use food stamps at the markets.

On Monday, Quinn announced the City Council’s own ambitious food policy agenda, called Food Works that addresses all aspects of New York’s food industry, from farming to composting. The plan looks at the way food reaches and then is distributed around the city for solutions to an array of problems.

"For far too long, we’ve ignored a growing crisis in our city and across the nation," Quinn said in her speech. "We’re a city of more than 20,000 restaurants, yet 1.4 million New Yorkers struggle to put food on the table. One out of every four children in New York City is overweight or obese. New York State farmers ... only make half as much per acre as farmers in other parts of the country. Meanwhile, the food system is responsible for nearly 80 percent. of our increased energy use in recent years. "

Both Cuomo and Quinn have stressed the need to update the Hunts Point Terminal Produce Market in the Bronx. The State Department of Agriculture and Markets supports rebuilding the market, constructed in the 1960s, to improve efficiency and food safety and reduce air pollution created by trucks. In particular, the City Council would like to see a large permanent wholesale market at Hunts Points to make it easier for businesses to purchase fruits and vegetables from local producers. The department estimates that rebuilding the market will cost between $300 million and $500 million.

New Yorkers shop for Thanksgiving at the Bowling Green Greenmarket.

"If we only get one thing in Food Works right, it has to be this,” Quinn said Monday. “How are we going to get healthy food to our neighborhoods if we can’t even get it into our city?” Quinn would like to see train service expanded throughout the state to allow more food to reach the market.

Quinn said that, with more local food in the city, New Yorkers, especially those living in poor neighborhoods, would be better able to buy more local produce. “If we want to have New Yorkers make better choices, we need to give them better options,” she said.

For people living in public housing and using food pantries, those options would include enrolling in a Community Supported Agriculture program. Cuomo said he would ensure that people could pay for their membership in installments and with government assistance benefits. In these programs people pay a set fee for a weekly or monthly basket of fresh seasonable produce direct from a local farm.

Cuomo and Quinn have urged schools, hospitals, nursing homes and corporations to buy more local produce and enroll in a Community Supported Agriculture program. In the past, state farmers have struggled to sell produce to the city’s SchoolFood program because it demands year-round, cheap and easy-to-handle food. Although the department has begin to purchase some locally produced fruits, vegetables and milk, the council report said, "This procurement has, thus far, occurred on an ad hoc basis." The council has said that Councilmember Gale Brewer will introduce a bill to require the city to develop new purchasing guidelines that would encourage it to buy from local farmers.

Whatever its shortcomings, though, Quinn used the Department of Education as an example of an institution that has increased its purchase of regional food without increasing procurement costs. "Why can’t every other city agency do the same thing?" she asked.

The speaker wants to keep food production in the city and have producers buy produce from local farmers. She acknowledged that a lot of low-income entrepreneurs who cannot afford to prepare their food in an approved commercial kitchen that complies with the city health department’s regulations. Quinn said the council had helped remedy that issue by building a shared kitchen in East Harlem within La Marqueta.

Finally, Quinn urged producers to minimize packaging and New Yorkers to compost. "We need to stop thinking of food scraps as garbage," she said. The council plans to expand the compost program at Union Square to other farmers markets so that more people will have a place to take their food scraps.

While New York politicians drum up support for their initiatives, local leaders have already reshaped their community’s food systems, making seniors in particular not only the recipients, but also the sources of local food.

Through the Healthy Communities Through Healthy Food initiative, seniors work on urban farms, sell food at local farmers' markets and grow food at public housing sites. The program directors said that a large number of older people have been involved in urban agriculture and food for years. Many started gardens in their backyards during the Great Depression or after World War II.

United Community Centers sponsors the East New York Farms! project, which runs two farmers markets that serve East New York, a food desert with one of the city’s highest obesity rates. Project members design gardens with raised beds so that seniors can grow food without straining themselves. They also train seniors to increase the yield of their gardens and to sell more of what they grow at farmers' markets.

Isabella Geriatric Center in Upper Manhattan has organized a senior-run fresh food buyers' club called YUM Food Box that offers regional produce to residents of Inwood and Washington Heights. Only a quarter of food retailers in those neighborhoods sell fresh food, and almost half of residents receive public assistance. Every month the buyer's club distributes about 300 bags of produce, which cost members $20 per share or $10 for a half-share. The club differs from Community Supported Agriculture in that members don't pay upfront for a share, which typically costs several hundred dollars.

Myrtle Avenue in Fort Green and Clinton Hill separates brownstones from the projects and those likely to eat fresh food from those who are less likely to do so. The Myrtle Eats Fresh initiative, led by seniors, tries to level that class disparity by creating farmers' markets, small urban farms on public housing land and fresh-food advocates.