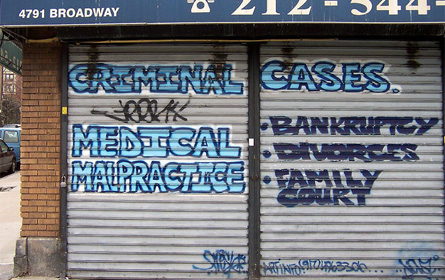 Ten years ago Jeremiah Taylor walked into a New York City hospital thinking he was going to undergo routine surgery on his lower back. Things did not go as planned.

Hospital staff didn't monitor his blood pressure while he was under anesthesia, and as a result it dipped to dangerously low levels -- so low that his optic nerves died. When he was wheeled out the back door of the hospital and given a month’s prescription for sleeping pills, he was totally blind. His life irreversibly changed. Gone was his privacy; now he would require help to do the things that used to seem so simple.

"I have to ask people I don't know for help getting to the bathroom," he said. "Can anyone really tell me my pain and suffering is worth only $250,000?" asked Taylor.

Taylor finished the legal wrangling over his own incident years ago, but now he has come to Albany to lobby against the recommendation that that non-economic damages in malpractice suits be capped at $250,000.

The caps represent one small part of the package assembled by Gov. Andrew Cuomo's Medicaid design team. The team's recommendations would trim $2.3 billion from Medicaid for the upcoming fiscal year. All these proposals made their way to Cuomo's budget, as well as the Senate's, and are now being debated in the capital. The caps, though, have met staunch opposition from the Assembly, and many expect them to emerge as a deal breaker in this year's budget negotiations.

Tip of the Cap

Hospital organizations like the Medical Society of New York, the Greater Hospital Association of New York and the Healthcare Association of New York State support the cap. These groups say the cost of malpractice insurance is skyrocketing, thanks to multi-million dollar malpractice awards, and make doctors leery of taking on high-risk patients. Further, the increases, they say, will force doctors to leave the state or even their profession. Hospital associations estimate that the caps will save them $700 million a year. They charge that trial lawyers oppose the cap because it would limit what they could earn from a malpractice suit.

Vehemently opposed to the measure in New York are lawyers groups such as the State Bar Association, as well as advocacy groups such as the AARP, Citizen Action and the New York Public Interest Group. They say the cap was proposed largely as a way to get hospital groups to support the rest of Cuomo's Medicaid plan.

"When doctors and hospitals were presented with the question, 'What do you want to sign onto this Medicaid program?’ their holy grail is to be unique from all other members of society -- to be immunized from their mistakes and consequences. When the genie pops out of the bottle and says, 'You get one wish -- not three,' this is exactly what they wished for," said Assemblymember Rory Lancman.

Assemblymember Deborah Glick said the proposal will limit the tools the public has to punish physicians for their negligence. "The way we punish people, the way we correct incorrect behavior in our society is by either sending someone to jail or by financial punishment,"said Glick. "If you take away the financial punishment, the system has no reason to correct itself. Doctors have no reason to be more careful,"she said.

Advocates on both side point to California, which has had a similar cap on non-economic damages in malpractice cases since 1975. The same figure was used: $250,000. Critics point out that by now the number should have been adjusted for inflation and would stand somewhere around $900,000. The number has not been adjusted for inflation in California, and the New York proposal also does not take it into account.

Proponents of the measure say that California's malpractice insurance rates have only risen by half the national average since the law took effect. Yet the number of malpractice cases per doctor in California has remained the same, and in almost half of malpractice cases judges have had to reduce non-economic awards suggested by juries that have wanted to to give plaintiffs greater awards.

Lancman says the stakeholders negotiating the Medicaid agreement did not seriously consider other routes of reducing malpractice costs. This, he said, would include working to reduce incidences of malpractice so that there are fewer lawsuits.

Lancman has sponsored a bill called the Medical Malpractice Savings Act to require that the health commissioner establish a set of rules for every hospital to ensure that each one has a comprehensive obstetrics program to reduce malpractice. The Lancman bill was inspired by a "recent report by an obstetrics team at New York Presbyterian Hospital that detailed how it reduced the department’s malpractice payouts by 99 percent.

Bill Ferris of the AARP agrees and blames the omission on the lack of "consumer representation" on the Medicaid redesign team. “There should have been more discussion on how to reduce medical mistakes, not on capping the damages," he said.

Ferris' organization is lobbying against the caps because, according to Ferris, seniors rely on non-economic rewards-- damages for pain and suffering-- to get compensation in malpractice suits. "Seniors are generally unemployed and rely on Medicaid and social security. This would limit rewards for pain and suffering, and economic rewards are generally based on future salary -- seniors don't have that. This does away with how they can be compensated for a medical mistake.

Glick has introduced legislation that would limit hospital administrators' pay to $250,000 a year. Glick said she is trying to make people understand that if $250,000 is enough to cover a life of pain and suffering caused by a hospital error than it should be more than enough for a hospital CEO to make in a year.

"I did this to raise the point that there is another side of the balance sheet -- one that is quite costly," said Glick. "I don't think it will pass, necessarily. ... There are a lot of people who have supported the bill, but hospital administrators are not so happy. I've stepped on some toes there."

Glick said she thinks Cuomo is picking and choosing which “special interests” to back and uses different standards.

"Gov. Cuomo says he doesn’t believe that school districts can't weather these cuts. He doesn't believe that there isn’t waste and corruption in these school districts. Well I don’t believe insurance companies will reduce their rates if this cap goes through. I think they will just take the money and run and find another excuse for why premiums are so high," she said.

With the three major legislative leaders currently in heated negotiations, it is unclear whether the caps will make it through as part of the budget. Cuomo has made it clear that he isn't keen on giving up anything in his budget and has told lawmakers that if a deal is not reached he will push through his budget in extenders.

If a deal is a reached, the caps could be a critical part of making it happen. Majority Leader Dean Skelos has told reporters that he could not support a budget deal that included with a millionaires tax or rent regulations; both of those things are near and dear to Assembly Speaker Sheldon Silver's heart. Silver is a lawyer and tends to be friendly toward trial lawyers. However unions that represent hospital workers also are close to Silver, and the hospital associations warn that if the caps don;t go through they could be forced into layoffs. It may be possible that the caps will be done away with as a concession to the powerful Silver.

At this point it is unclear. But things are much simpler to Taylor, who plans to come to lobby on the issue until there is no more hope. He says he wants others to have the right to sue for an amount that compensates them for having their lives altered by negligence.

"Right now, if I hit you with my car you can sue me, but I can't sue a doctor for more than $250,000? I will fight for other people’s rights to compensation. Why not look at reducing malpractice? Why aren’t doctors subject to tests? I think they sat in a back room and made this deal to take away people’s rights to compensation. It is just un-American."