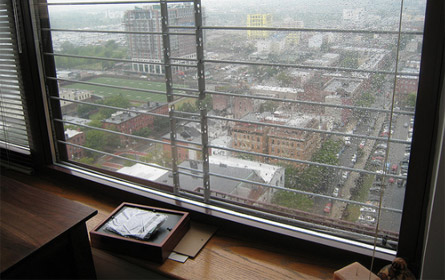 With the budget passed and the summer over, the City Council yesterday got returned to its regular schedule. But while the fall usually brings a spate of legislation -- a fraction of which even sparks controversy -- Tuesday's meeting brought unanimous votes on the only two bills under consideration.

The highest emotion came in comments on an item not on the council agenda: the detention by police Monday of one of the council's members -- Jumaane Williams -- and a political aide.

Several council member stood to declare their support for Williams and to call for the changes in police procuedres that several said had lead to the handcuffing of the two black men -- and to the stops of hundreds of black and Latino men every day.

Putting Their Guard Up

In what City Council Speaker Chirstne Quinncalled an efort to make better use of city resoures, the council approved Intro 531-A, which would step up enforcement of city rules requiring that all apartments occuped by young children have guards on the window.

Empghasizing the measure does not take any authority away from the health department, Quin said it "also gives that power to housing inspectors who are out there every day."

In the city, Quin said, "The number of children who fall out of windows is not as high as it was at one time," but national figures indicate the need to make sure that window guards are in place.

The council also approved a measure aimed at cleaning up the city's 520 miles of shoreline and its waters by requiring the Department of Environmental Protection, Department of Sanitation and Department of Small Busines Servies to coordinate efforts to combat illegal dumping. The agencies also would also have to report on the implementation of the plan.

Speaking next to a photograph of tires dumped on the shore, Quinn said the city has not had a unified effort to prevent dumping and the efforts of various agencies have been "sporadic at best and clearly inadeuqate."

A Taskforce on Violence

Before the meeting -- and after a weekend marked by a rash of gun violence cross the city -- Quinn announced the council had formed a taskforce on gun violence to be chaired by Williams and Councilmember Fernando Cabrera. Acording to the announcement, the committee, which will focus on black and Latino communities, will look at the causes of the violence and look at ways the city could help combat it.

As an example Quinn cited a campaign in 2008 to fight back at the taboo on snitching in some neighborhoods.. The city covered graffiti condeming snitching, she said, and "we began to send a message that it's not snitching, it's saving a life."

Quinn conceded that at least some of the problem lay not in the city, but with lax gun laws in other parts of the country. While supporting the push for tougher gun laws nationally, she said, "We are also going to find ways to do what we can locally."