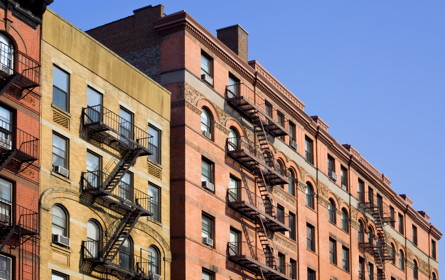 Gov. Andrew Cuomo touted it as “the greatest strengthening of rent laws in decades” when the state Legislature approved a package of bills last year that renewed the city’s rent control laws until 2015. But the most optimistic housing advocates would only call it a draw in their battle with real estate interests.

Tenants Political Action Committee and other tenant advocacy groups wanted more -- they wanted the state to limit landlords’ abilities to claim that they made costly repairs to apartments, thereby pricing them out of rent regulation. They wanted tougher enforcement to make sure claimed improvements to apartments were actually made. And they wanted the 2011 increases to keep up with inflation. But they didn’t get any of it.

While still smarting from last year's brawl with real estate interests, advocates for tenants have renewed their push for rent law reform this year, arguing that current policies are continuing to decimate the ranks of rent-controlled apartments and making it harder for low-income families to live in the city.

Last Wednesday night, several of the groups, including the Real Rent Reform Campaign -- made up of organized tenants, labor organizations and community groups that advocate for “progressive” pro-tenant legislation -- held a well-attended town hall meeting in Brooklyn (they estimated the crowd at about 200 attendees) while the board of the influential Tenants PAC met separately and decided on endorsements for state legislative races.

The groups hope that, with the entire state Legislature up for re-election this November, they can help get candidates into office that are more willing to pass legislation they favor.

Meanwhile, the groups are sensing a deal between the Assembly and Senate might be possible because of the sunset of the J51 tax abatement that gives developers tax breaks to renovate apartment buildings as long as they provide low income housing.

The idea goes something like this -- the real estate lobby wants the tax renewed and, while Senate Republicans want to give it to them, the Assembly Democrats won’t pass it unless pro-tenant sweeteners are included.

Meanwhile, the piece of legislation that could have the greatest impact on rent that is being backed by advocates would change the requirements for serving on the Rent Guidelines Board -- the group that sets the rates for rent-controlled apartments and give the City Council approval over the Mayor’s appointments to the body. The board has raised rates by around 3 percent each year for the past 40 years. Its deliberative process is secret.

Putting the mayor’s picks in the hands of the Council would be a major loss of power for the mayor. Currently, the nine-member board is made up of two appointees to represent owners; two tenant representatives; and five members representing the general public.

“We think it’s a catastrophic idea. It would be the death knell for private rental housing in New York. There would be zero increases forever. I certainly hope the bill doesn’t go anywhere,” he said.

Stefan Ringel, spokesman for City Councilman Jumaane Williams, said his boss thinks the current makeup of the RGB “fails to reflect the interests of real people. It seems like no matter what the economic condition is, the rent goes up.”

State Sen. Daniel Squadron and Assemblyman Brian Kavanagh are sponsoring the bill. The City Council is expected to pass a resolution in support of the legislation, and Council Speaker Christine Quinn has attended rallies and spoke out against the RGB. At a rally to support the legislation held in front of City Hall on April 16, Quinn compared the RGB to a "kangaroo court" because its decisions seemed to be preordained.

Michael McKee, treasurer of Tenants PAC, said the 2011 increases were “bare bones” and didn’t even keep up with inflation.

In June 2011, McKee had practically lived in the capital for weeks with fellow tenant activists by his side, chanting, cajoling, arguing and pleading with legislators and staffers for rent laws that would end loopholes that allow landlords to take rent-regulated apartments off the roles.

The Tenants PAC had watched in horror for the past two years while the Senate Democratic majority they had helped elect ignored and buried their legislation.

Former state-Sen. Pedro Espada was not shy about his ugly relationship with housing advocates. Espada, recently convicted of stealing tens of thousands of dollars from the network of Bronx clinics he helped start, was repeatedly accused of bottling up housing bills. In multiple interviews with the Gazette, he said he disdained tenant advocates who he insisted did not care about his constituents’ interests. In 2010, the Tenant’s PAC made a commitment to defeat him and helped elect Gustavo Rivera to replace Espada.

Gov. Cuomo had never made it clear in the lead-up to the legislative showdown what qualified as tougher rent laws -- only that he wanted them.

The new laws were scheduled to sunset in 2015 -- meaning that advocates wouldn’t have the benefit of the pressure created by an evaporating law to lobby legislators. But, on Dec 31, 2011, the J51 Rent Abatement expired, and tenants’ advocates saw opportunity.

In April, Assembly Speaker Sheldon Silver held a news conference focusing on tenant legislation. The to-do list read something like this: close the preferential rent loophole; make rent increases for major capital improvements temporary; reduce the vacancy bonus; limit a building owner's ability to recover a rent-regulated apartment for personal use; and reforming the Rent Guidelines Board.

“Last year we were able to ensure the rent regulations were renewed and strengthened,” Kavanagh said. “This year, we hope to see some modest improvements to the system.”

Specifically, his bill would change the requirements to serve on the RGB.

Current requirements dictate an appointee must have a background in financing, economics or housing. But Kavanagh’s bill would add allow appointees to have backgrounds in social sciences, urban planning, public service and philanthropy.

The assemblyman said he thinks the current requirements “don’t reflect all of the aspects” that need to be considered by a board that is tasked with setting guidelines for rent-controlled housing.

“If the bill passed, it would make a significant improvement in how the guideline board is structured,” said McKee.

No deal has been proposed, and tenants’ advocates like McKee said the real estate industry has not been making much of a fuss over J51. “In a non-sunset year it is really hard to get the Legislature to do anything on rent,” said McKee.

“No one has said a specific trade is on the table,” Kavanagh said. “But many think the real estate lobby would like to see a renewal of the J51 tax program this year. Its sunset prevents the city from giving out new exemptions.”

Freund said he thinks there won’t be any deal. “I think J51 will be renewed because it is in the city’s interest. When the city puts its weight behind it, it will happen and it won’t be tied to anything.”

The Legislature and the Council would have to approve any renewal of the abatement.

Kavanagh’s bill has made it out of the Housing Committee and could come to a vote in the next few weeks. A spokesman for the Senate Republicans did not return requests for comment. The Council’s resolution is still in the housing committee.

Still, if things go awry this legislative session, the Tenants PAC is ready to try the electoral route. They have backed a number of Democratic Senate candidates.

McKee’s group will be focused on backing a challenger for Republican state Sen. Martin Golden -- one of only two Republican Senators from the five boroughs -- but it has so far not endorsed a candidate in the race. Golden has voiced support for tenant bills at times, but has angered advocates like McKee for not pushing his majority harder for tenant rights.

Golden has at times insisted that the problem of vacancy decontrol -- where landlords claim to make repairs to vacant apartments to price them out of rent control -- is not a real problem in his district but instead a worry for Manhattan legislators. However, a 2008 study found that 30 percent of Golden's constituents lived in rent-controlled housing. Golden did not return calls requesting comment.

“It is not a foregone conclusion that the Republicans will control the Senate in 2013,” McKee said.