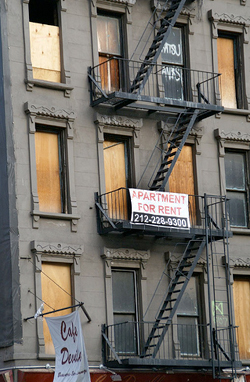 The signs of eviction -- abandoned furniture dotting the hallways, renovation crews climbing stories with paint cans in tow -- characterize the latter years of Terry Bocanelli's stint on the West Side of Manhattan.

A resident there for more than 15 years, Bocanelli's 31st Street apartment building has become a revolving door: rent stabilized tenants leave and higher income residents swoop in. The newer transplants bring more than their belongings. They bring with them higher rents.

"You'd see immigrant workers in the hallways with their tools, plaster buckets and building materials in my neighbors' former apartments," Bocanelli told the City Council earlier this week. "A curious phenomenon: low-wage immigrant workers renovating apartments where other immigrants lived in order for higher paying tenants to move in."

Thanks to a loophole in the state's rent stabilization laws, advocates say, vacant apartments, like those in Bocanelli's building, can quickly morph into market value residences. Dating back to the 1970s, vacancy decontrol (the process of transitioning a vacant rent stabilized apartment into a much more expensive market one) is just one of the rent control issues landing on the City Council's plate as of late.

The council is poised to approve the extension of rent control by the end of the month -- standard procedure for the past three decades -- but other battles, which are priorities of Council Speaker Christine Quinn this year, could prove to be tougher than initially expected .

Every three years, the City Council must declare a state of " housing" emergency in the five boroughs in order to reauthorize rent control . With the administration's support, the council is expected to do so without controversy by the April deadline.

What could cause sparks, though, are two other proposals being pushed by Quinn: the rescinding of vacancy decontrol and the state's Urstadt law. Mayor Michael Bloomberg's position has not yet been entirely confirmed on either of these issues -- though he has raised serious questions on the repeal of Urstadt.

Both issues are also in the hands of legislators upstate. The repeal of Urstadt would give the city home rule over eviction and rent authority policy -- a power it gave up in 1971. The bill in Albany, introduced by State Senator Liz Krueger has garnered 10 sponsors. It has already passed the Assembly.

At a hearing on Monday, City Council members, advocates and scores of tenants came out in favor of the repeal.

"Let our people go," Brooklyn Borough President Marty Markowitz cried out with a particular air of nostalgia. "Having these decisions made in Albany benefits nobody expect the real estate industry and its lobbyists for sure."

Others echoed his sentiments.

"I would rather trust this council -- for better or worse -- to govern the lives of the people of the city of New York than people who have absolutely no interest in our lives from upstate New York," said Councilmember Lewis Fidler of Brooklyn.

With the handing off of the Senate majority to Democrats this year, many advocates were reassured that this would be the year for Urstadt's repeal. Quinn even inserted the policy into her state of the city address.

In addition to myriad issues monopolizing Albany's agenda (such as the Metropolitan Transportation Authority bailout or the state budget crisis), the mayor's uncertain position could also drive Urstadt deeper underground. When asked last month, Bloomberg said : “We also have to be mindful that the housing rules in New York City can’t be enacted or maintained in a vacuum any more than the country’s laws in this day and age be maintained in a vacuum.”

His statements are far from a vote of confidence.

What could have better luck is the speaker's call to do away with vacancy decontrol. Also a child of rent control revisions in the 1970s, vacancy decontrol, the council estimates, could have taken as many as 300,000 apartments off of the rent stabilization rolls.

To lose this stabilization status, these apartments would have to have rents higher than $2,000 a month and, as inferred by the policy's title, become vacant.

State Senator Andrea Stewart-Cousins , who represents Yonkers, introduced legislation to repeal these provisions and bring back many of those decontrolled apartments. It would allow for apartments to become destabilized if rents exceed $5,000.

Stewart-Cousins said the bill currently has 23 sponsors. The assembly has already approved the bill.

Advocates say landlords have intimidated or harassed tenants out of stabilized apartments so they can charge market rates once they are vacant. "While there are some protections against retaliatory evictions, the protections are not very strong and some tenants are too fearful to take the risk," said Louise Seeley, the executive director of the City-Wide Task Force on Housing Court, at this week's council hearing.

The proposal has its critics. According to a statement by the Rent Stabilization Association, a landlord group, "Extending and expanding the existing web of rent regulations will have dire economic consequences for the city, while failing to address housing affordability. On the other hand, continued and expanded deregulation will generate economic benefits for the city and its residents, including increased tax revenue which could be used for housing assistance targeted to the truly needy."

Bloomberg has remained silent so far. Though Stewart-Cousins admits Albany is distracted currently, she is confident the State Senate will review and possibly approve the bill once the budget has been approved.

"It would be premature to say anything is definite, but I can say we are certainly taking the matter very, very seriously," said Stewart-Cousins.