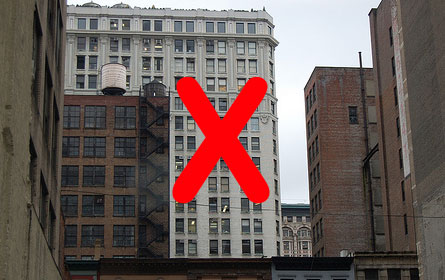 Patrick and Tari Kelly had no idea they were blacklisted.

They were Midtown subletters for two years, until their temporary landlord decided to renovate the building. They moved to Queens and six years later tried to relocate again to Washington Heights.

Who knew their brief Midtown stint would come back to haunt them?

When the Kellys put in their credit application for the new Upper Manhattan apartment, they were denied -- all because the Midtown landlord had started proceedings in Housing Court against them, proceedings that never amounted to anything.

The Kellys never even knew the action was filed. But that one incident left a practically permanent scar on their tenant report, which many landlords use to confirm or deny tenants residency in their buildings, say city officials.

The City Council hopes to prevent similar incidents in the future.

With hundreds of companies across the country, this industry, unbeknown to many tenants, can misrepresent tenants' history, as it did for the Kellys, Garodnick said. While these reporters are subject to the same federal standards as the country's three major credit rating agencies, these tenant-history reports are often vague and are not double-checked for accuracy.

For instance, the Kellys' landlord had filed a holdover case against them in housing court to ensure they would leave the apartment, which they had planned on doing. Landlords use such cases as a precaution, said Patrick Kelly.

But for the Kellys, it meant that their tenant-history report tagged them as having a housing court lawsuit and so prevented them from getting the apartment they wanted.

"We don’t know how long this will last," said Kelly of the black mark. "It will probably follow us forever."

In other cases, said council officials, tenants can be marked with nonpayment or eviction notices -- a serious scar on their tenant history report -- if their landlord goes into foreclosure. They can also be cited for failure to pay if they are holding their rent in escrow in an attempt to make their landlord pay for vital repairs, a common occurrence in New York City apartments.

All of this would appear on their tenant record and give potential landlords a reason to deny them an apartment.

Other tenants are victims of mistaken identity. Because the industry is practically unregulated, said Quinn, tenants can see another person's faults on their record -- maybe because they share the same name.

"Our bill will give tenants the chance to set the record straight," said Quinn.

The bill, which the speaker said the council could approve as early as this summer, would require any landlord or management company to disclose the name of the reporting agency it uses, which would allow the tenant to request their records. Landlords would be required to post signs making potential tenants aware they are allowed to request one tenant history report a year for free from each agency. Landlords that do not comply could be subject to a $500 fine for a first violation.

"Tenant screening reports are one of the most powerful tools working against renters today, and yet they are almost completely unregulated," said Garodnick, who represents the Upper East Side. "The notification requirements in this legislation will let prospective tenants know when one of these lists is being used, and just importantly will give them a chance to correct outdated or inaccurate information."

Council officials recognized that the bill would not force agencies to comply with a tenant's request to change a record. Quinn said advocates and city officials are working with Assemblymember Jonathan Bing to draft legislation that would further regulate the industry upstate.