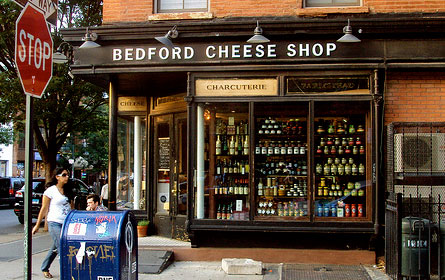 This is the first in a series, to run between now and Election Day, examining Mayor Michael Bloomberg's record in key areas.

Judy Stein has lived in New York City all of her life, and in Williamsburg for a third of it.

She spent most of her time there in a one-and-a-half bedroom apartment on Bedford Avenue above the street's 60-year-old print shop -- once owned by her former roommate and confidante.

That shop is now about to become a cell phone store. Stein at age 63 is now homebound, stuck in a wheelchair after her left leg was amputated last year. And last week, her attorney was headed to housing court to battle an order of eviction for the third time.

"They don't want this to be a neighborhood," said Stein, sitting in her yellow and blue kitchen last week. "All of these people that are buying these buildings... they don't live here. They don't care about what's going to happen to this neighborhood," she said, slamming her hand against the kitchen table. "All they are interested in is this." Stein rubbed the tips of her fingers together. "The money," she said.

Stein's story is familiar to tenants across the city. As gentrification and the now-busted housing market fueled astronomical rents and luxury development, some lower-income New Yorkers (just call them "poverty people," said Stein) have been left with fewer housing options.

Almost five years ago, the Bloomberg administration came up with several solutions. One of them was to rezone scores of communities, Williamsburg included, across the city and provide financial incentives to developers to build permanent affordable housing -- otherwise known as inclusionary zoning.

The problem, some advocates and experts say, is that it isn't meeting expectations.

A review of the units created by this type of financial incentive shows that the administration is not close to hitting its goal. And given the economy, it is unlikely to anytime soon. What a spokesman from the Department of Housing Preservation and Development calls a "key piece" of the administration's affordable housing agenda has to many advocates, officials and experts been disappointing. The city disagrees, saying the program already has created thousands of units, despite being temporarily set back by the crippled housing market.

For their part, advocates and experts wonder how the mayor's free market driven development and affordable housing policies will fare now that the boom has gone bust.

It's Not Just Luxury

Nowhere was the mayor's inclusionary housing program predicted to take off more than in Williamsburg.

The beacon of the newly expanded program, which had once applied only to skyscraper-saturated areas of Manhattan, the massive Greenpoint-Williamsburg rezoning has produced 768 affordable rental apartments since 2005. According to the Department of City Planning, the city had hoped for more than 2,200 over the course of a decade. About 20 percent of the units that have been built or are now under construction are renovations of existing affordable apartments, according to the Department of Housing Preservation and Development.

Back in 2005, the administration said the rezonings already approved -- like Hudson Yards and Greenpoint-Williamsburg -- would alone create 6,000 units of affordable housing thanks to inclusionary zoning.

Nearly five years later and with more than a dozen new neighborhoods under the program, less than half that number have been preserved or built during Bloomberg's first two terms. A vast majority of those apartments, 1,786 of the total 2,716, are in Manhattan, according to the Department of Housing Preservation and Development.

Some of these developments were projected to create affordable housing over an extended time period. Even taking those deadlines into account, they are behind schedule.

Inclusionary zoning gives developers the option to increase a project's total floor to area ratio by 33 percent if it designates 20 percent of all the apartments as affordable housing. Up until this year, it applied exclusively to rentals. That bonus could mean seven additional stories for a 23-story building. In addition, the affordable apartments can be financed with public subsidies. They can also be located on the same site as the rest of the project or within the same community district.

For most projects, tenants must make less than 80 percent of the area median income -- $61,920 for a family of four. Portions of some projects, like Hudson Yards or West Chelsea, can opt for higher brackets, between $96,750 and $135,450 for a family of four, and still receive subsidies and the density bonus.

These incentives were supposed to make the voluntary construction of affordable housing economically feasible for developers. And for communities, the promise of these affordable units was seen as compensation for high-density luxury development in their midst.

Since 2005, the administration has extended inclusionary zoning to 20 neighborhoods -- including the Bronx's Lower Concourse, Brooklyn's Flatbush and Queen's Dutch Kills. So far, in more than half of them (some of which were approved in 2009 and 2008) developers haven't taken the bait.

Or take East Harlem, which was included in the massive 125th Street rezoning approved in April 2008 -- just as the market started to reel. According to the Community Board 11 Chair Robert Rodriguez, affordable units from inclusionary zoning are not on the map.

"The simple answer is no, we haven't seen any development in the areas that were rezoned," said Rodriguez. "It's hard to tell the free market what they can and cannot do."

According to the housing department, 37 units are under construction in that community district.

Those in the real estate industry say the city shouldn't expect to see any increase in these numbers soon.

"A lot of stuff out here is stalled," said David Maundrell, the president and founder of aptsandlofts.com, a real estate marketing firm that specializes in Williamsburg. Maundrell just saw a more than 400-unit development fall through, a portion of which would have been inclusionary housing. The developer, he said, couldn't get financing. "People aren't building."

According to Eric Bederman, a spokesman for the Department of Housing Preservation and Development, inclusionary housing will work -- eventually.

"While the current economic climate has slowed the development of market-rate housing, inclusionary zoning was put in place as a forward thinking initiative to ensure that affordable housing can still be created during the strongest housing markets, when it is historically more difficult to do so," Bederman said in an e-mail. "The good news is that even in a time when we're seeing drops in housing starts and new construction, the city still has projects being developed through the mayor's inclusionary zoning plan."

Officials tout projects like Williamsburg's Edge, which will bring 346 affordable units to North 6th Street, or its neighbor, Toll Brothers' Northside Piers, which provides 263 units within a half-mile of its waterfront Williamsburg towers. These have been Northern Brooklyn's largest success stories so far.

Simultaneously, housing advocates and policy experts claim the inclusionary zoning program was flawed from the start.

"I think there is some Peter principle for public policy that anything that is a good idea on a small scale will inevitably be expanded and pushed to a much larger scale so it no longer works," said Julia Vitullo-Martin, the director the Regional Plan Association's new Center for Urban Innovation. "I think inclusionary zoning is in that category."

Nationally, the program has had its ups and downs. According to a report from the Furman Center for Real Estate and Urban Policy, inclusionary zoning created more than 15,000 affordable units as of 2003 in the Washington D.C. area. But in suburban Boston, where 43 percent of the jurisdictions had adopted inclusionary zoning as of 2004, there were no affordable homes at all.

Vicki Been of the Furman Center says traditionally the most flexible inclusionary housing programs -- the ones that give developers multiple options, such as a density bonuses or tax incentives -- have been the most successful.

But some advocates disagree. They claim if inclusionary housing was mandatory, then the city would finally have a steady stream of affordable units with every project.

"It hasn't generated the number that people thought it would, partly because the subsidies weren't deep enough," said Adam Friedman, the director of the Pratt Center for Community Development. "Now that the market is in the doldrums, it's time to look at mandatory inclusionary zoning."

Recently, the city has retooled the program to include a home ownership option, which it hopes will encourage more developers to participate in the program.

Inclusionary zoning is just a sliver of the Bloomberg administration's housing plan, and it alone can't solve the city's housing drought.

So, enter the Bloomberg administration's larger affordable housing program, dubbed the "New Housing Marketplace Plan." Its goal: to create and preserve 165,000 units of affordable housing in a decade. The Department of Housing Preservation and Development says it has created or preserved 94,000 affordable homes so far -- more than half of that number have been reconstructed and rehabilitated apartments, not new construction.

But that housing plan, which includes preserving affordable housing stock and finding new land for affordable units in addition to inclusionary zoning, is facing a far different economy than when it was first proposed.

In front of a packed audience at the New School late last month, the department's new Commissioner Rafael E. Cestero explained the approach.

"The reality is that many of these neighborhoods have had a hard time supporting those kinds of developments and many of those developments are in trouble," said Cestero of the large luxury condominium developments now stalled across the city. "Faced with the current economic realities, we must and are examining every element of the plan, every new market-driven innovation in front of us and looking at the way forward with a different lens and a different focus."

With that in mind, the department (borrowing from the campaign slogans of the mayor's Democratic competitors), will look at every project through a "neighborhood lens," said Cestero. Some of that, he added, would include turning failed luxury condominiums into affordable housing as well as reclaiming apartments taken off of rent stabilization rolls during the booming market.

Advocates, though, aren't applauding yet. They say much of the Bloomberg administration's housing policy has focused on getting private developers to create new housing -- not on trying to preserve the existing stock. For instance, between 2005 and 2008, according to the city's most recent housing survey, about 20,000 rent stabilized units, or 2 percent of the entire stabilized stock, were lost to the market. Focusing on rent stabilization reform and rent control -- as proposed by City Council Speaker Christine Quinn -- is the real solution, they say.

"The priorities that Bloomberg has put on development of new construction as a solution to affordable housing has been the wrong emphasis," said Mario Mazzoni, the lead organizer at the Metropolitan Council on Housing. "You cannot build yourself out of the affordable housing crisis in New York City."

In Williamsburg, Stein was never optimistic about the neighborhood's waterfront development. She knew she would never be able to live there.

"My grandparents came here as little kids. They worked. My parents were born here. My family had a business. We owned a house. Things were looking so nice," recalled Stein. "And now, you know, my mother is 91 and is living in a nursing home in Pennsylvania. Maybe I'll have to go live with her."

Stein could be just one more New Yorker displaced by the city's affordable housing shortage.

There is no question that luxury development and the city's changing landscape have been hallmarks of Bloomberg's tenure at City Hall. But given the drastic change in the economic climate, advocates and experts are waiting to see, if Bloomberg is re-elected, how he will adapt.

"OK, he had two pretty good terms on this issue, and now all the problems are coming home to roost and the future looks grim," said the Regional Plan Association's Vitullo-Martin. "In a way the question is what is he going to do next."

Homes, including Judy Stein's, hang in the balance.