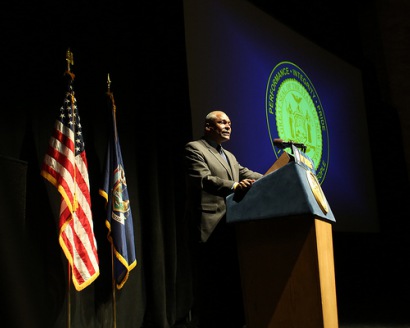 ALBANY, N.Y. — Assemblyman Keith Wright has resided at the same apartment at the storied Riverton Houses in Harlem for all of his 58 years. “Not many people can say that,” says the father of two.

Wright has played many roles at the Riverton Houses on 135th and Fifth Avenue — child, son, student, father, elected official.

But when Wright was announced as the new head of his chamber's powerful housing committee, it was his other role — as tenant advocate — that was seen as a boon to the city's vocal housing activists. Here was someone, they figured, who was deeply familiar with their plight and powerful enough, connected enough and friendly enough with the one man who really matters in Albany — Gov. Andrew Cuomo — to get things done.

Only a few days after his appointment, though, Wright's committee helped push through and ultimately pass a rent law package that gave tax breaks, known as J-51, to condo owners, which tenant advocates say help landlord to improve luxury apartments.

“What he did was really disgraceful," said Michael McKee of Tenants Political Action Committee, a group that works to elect pro-tenant legislators. "But I suppose he was taking directions from leadership."

Just days before, McKee had hailed Wright's appointment, saying: "He will be excellent."

Jaron Benjamin, the executive director of Metropolitan Council on Housing and a member of the Real Rent Reform Campaign, also said he was disappointed by the J-51 program vote. But he said he was "taking a wait-and-see approach" to Wright's appointment.

Wright admitted that his office "got some blowback" on the J-51 bill, but that it had to be passed. “I was named housing chair on a Friday and we had a very large bill that was somewhat controversial that had to be done on Monday," he said, but then added, "I know folks in the tenant movement were upset, they wanted that bill to be used as leverage but it was a bill for coops, condos and lofts and those type of people do live in New York City. We had to do this bill.”

The highly influential Assembly housing committee was once used as a lever of power by Vito Lopez, the disgraced Brooklyn political boss, who was removed from the spot after a sexual harassment scandal blew up last year. Lopez notoriously used his position as the housing committee chair to get friends and political allies perks, jobs, and apartments.

Before Wright was named head of the committee on housing by Speaker Sheldon Silver, he had steadily grown in stature over his 21 years in Albany. He served as the chair of the powerful labor committee and social services, as well as the black and Puerto Rican caucus. Last year, Gov. Andrew Cuomo personally picked Wright to co-chair the state Democratic Party.

He is also well-liked by his colleagues. Wright strolled through the ornate but basically empty Assembly chamber on a recent Tuesday afternoon, binders of legislation sit neatly on desks with empty seats. Wright’s colleagues were mostly gathered in conference but a few linger outside the chamber speaking to visiting school children or chatting on their phones. But they all take the time to stop and greet Wright. Wright returned their greetings in a deep, echoing rumble — the kind that could announce movie trailers or be the voice of god.

As long as his history in Albany might be, Wright’s been deeply involved in housing issues for significantly longer.

He traces it all back to Riverton Houses, which had also been called home by former Mayor David Dinkins and jazz great Billy Taylor.

“It was the first so-called development that was built for the quote unquote black middle class,” Wright explained during an interview this week at the back of the Assembly chamber. “When my father was away in World War II in Europe, my mother was in charge of trying to find an apartment and she went down to Stuyvesant Town and she was told that no blacks were allowed in Stuyvesant and I guess by eminent domain and Robert Moses and those folks, much picketing and outcry Metropolitan Life built Riverton, which is supposed to be the uptown equivalent of Stuyvesant Town.”

Life was good in Riverton for the young Wright. He recalled it as a melting pot of families from all walks of life. “There were folks who had money, folks who were middle income: teachers, police officers and folks that were on public assistance as well and it made for a fantastic community," he said. "I really had one of the best childhoods anyone could ever imagine.”

In the 1980s, Wright found the condition of his apartment building lacking and decided to do something about it. He became head of the tenant’s association and quickly became the go-to for his neighbors who had similar concerns about the building. “People would knock on door day and night looking for some sort of relief. They might want to clean up the common areas, need a new refrigerator, a new stove or need help dealing with the rights of succession. Some of them were late on rent.”

Wright had success and failures. Common areas were cleaned up, 40-year-old elevators were replaced, they even got some rent reductions, but they were unable to stop a major capital improvement request by the landlord. “These are the type of experiences that go into my formative years before I became the chair of housing-it has molded and shaped me to a certain extent,” Wright said.

Wright may have had sensations of deja vu in the days following his appointment as chair of the housing committee — with everyone wanting to talk to him about housing and this time it isn’t just tenants.

“What I find is that everybody wants to talk to me now from the titans of industry to Mrs. Smith pushing the shopping cart about housing," he said. "What I find with the titans of industry is that they try to dazzle you with their knowledge --using a lot of acronyms expressions that are customary to the housing industry but I got to get caught up to speed. I’ve been playing off my naivety asking a lot of ‘what do you mean? What do you mean?”

Forgive landlords, though, if they eye Wright with some skepticism — though he has been known to be open to both sides on the issue of housing. But Wright is clear about where his bias lies.

“Landlords are slick, they are business folks. When we first did vacancy decontrol stuff in 1997, no one had any idea," Wright said. "If you made more than $175,000 a year and the rent for your apartment was over $2,100 you were not eligible for rent control. At that time the only one who fit that criteria in my neighborhood was a guy named Percy Sutton" — referring to the black businessman who had also been Malcolm X's attorney — "No one made that kind of money. Of course, landlords get in there now and they say they are fixing them up and suddenly the rent is $2,100 and it is off the ranks now.”

Wright said at one point his landlord offered him $10,000 to move out of his apartment. “It was a sucker’s bet,” he said. “Landlords now actually hire private investigators to see how many people are living in apartments, how many days people in an apartment. Some landlords just ain't good people,” says Wright. “I’m not saying tenants are always right.”

Wright said he thinks that the Cuomo administration will be addressing a lot of concerns through the tenant protection unit Cuomo created in 2011.

Tenant advocates might laugh at the idea in some ways, since the unit has been seen as an underfunded and understaffed nod to tenants' groups. But Wright noted that Cuomo has put $4.8 million in his budget this year for the unit that is designed to help tenants who are being harassed, whose apartments are being wrongfully taken off the affordable housing ranks and to generally enforce landlord/tenant regulations.

Wright clearly has great respect for Cuomo and his knowledge of housing issues. “He can talk housing ad nauseam,” Wright said. “He can roll!”

Affordable housing has already become a focus of the mayoral race. Council Speaker Christine Quinn used her state of the city address on Monday to tout a package of legislation called the Permanent Affordability Act, which she said would be sponsored by Wright in the Assembly and Martin Golden in the Senate. The three-pronged measure that calls for building 40,000 units of affordable housing for the middle class, capping building owner’s taxes at a certain percentage of their rental income as long as they keeping units affordable even after they age out of affordability protections and extending 421-a tax exemptions to developers.

Wright said he has yet to see the legislation but says he did talk to Quinn this past Sunday. “She called me and asked if I would look at a bill. When the speaker of the house calls you at least have to look.”

Housing groups tend to favor the first part of the measure but feel the rest of the proposals are giveaways to landlords.

“We applaud Speaker Quinn for focusing on the need for both middle-class and affordable housing and the tax policies impacting them, and we look forward to reviewing the details and the legislation involve,” said Real Estate Board of New York president Steven Spinola in a statement.

Golden however said the 421a extension and the tax break proposal are in the works and won’t likely get a vote until the end of session.

Wright says he has a good relationship with Sen. Kathy Young who chairs the Senate housing committee and expects to have pleasant dealings with the other chamber.

Above all the things Wright’s colleagues say of him it is that he weighs issues, and takes the time to listen. “He listens and he is extremely thoughtful,” said Sen. John Sampson of Wright.

“I’m assuming the Assembly’s agenda isn’t going to change much. He hasn’t even had his first committee meeting and we haven’t talked to him yet,” says Frank Ricci of the Rent Stabilization Association of New York. “But he has always been willing to listen to both sides on the issues and you can’t ask for more than that from an elected official.

And Golden has similar praise. “I’ve worked well with him. We know each other well. I’ve found him to be a responsible individual, soft spoken but nobody should be fooled he is a very intelligent and articulate man who knows what has to get done. He is a very formidable man and I look forward to working with him.”

“I have a lot to learn,” says Wright, “but I am excited for this position.”