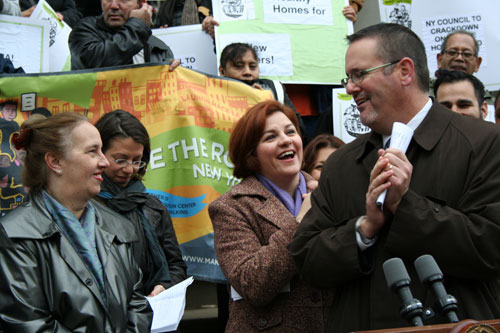 Clutching a sign splashed with the slogan, "No More Asthma," Rodrigo Castillo relayed the saga of living in a dilapidated, practically abandoned apartment building in Sunset Park.

From the steps of City Hall on Tuesday, Castillo described through an interpreter the winter he spent without heat or hot water and the endless trail of rats and cockroaches permeating his place.

Nonetheless, Castillo's landlord has done nothing in response.

But thanks to a retooled city program, Castillo and more like him can get help, City Council officials said. Council Speaker Christine Quinn announced Tuesday the expansion of the Safe Housing Act, originally approved in 2007 to target 200 buildings with the worst housing violations for improvements. As part of the expansion, the council will consider legislation to isolate larger buildings and properties with violations connected to high asthma rates, like mold and vermin infestations.

"We are recognizing that peoples' homes can actually make them sick," said Quinn. "Asthma has a tremendous amount to do with housing."

The latest iteration (Intro 436) of the Safe Housing Act is part of a focused enforcement effort by the city to pour inspectors into buildings with the most hazardous violations. Under the effort, if a landlord refuses to make repairs to bring a building up to code, the city makes the improvements for them. The city then sends the property owner the bill.

Housing Preservation and Development Commissioner Rafael Cestero estimates two-thirds of landlords make the repairs on their own.

Under the new proposal, buildings with less than 20 units could be targeted if they have more than five immediately hazardous violations, like mold, per unit for the preceding two years. If a building has more than 20 apartments, each one would have to have approximately three hazardous violations to qualify. The legislation also could impact buildings with liens for emergency repair charges from the city.

The latest expansion, Quinn said, would not bear any substantial additional cost to the city.

When announcing the expansion Tuesday, a swarm of advocates and residents cheered on the council from the steps of City Hall. They claimed the bill would save lives.

"With the expansion of the Safe Housing Act, we can learn how to more effectively address pest and mold violations that negatively impact the health of thousands of asthmatic New Yorkers, and ultimately improve the quality of life for those children and families," said Michelle de la Uz, the executive director of the Fifth Avenue Committee, an advocacy group in South Brooklyn.

Quinn said the council would hold a hearing on the bill on Dec. 14, and it would be approved shortly thereafter.

As fierce controversy over the increase of bike lanes heats up, the City Council approved legislation Tuesday to force the Department of Transportation to map out criteria for the construction of certain traffic calming devices, including speed bumps and bike lanes.

The bill, (Intro 376) which was approved unanimously, will reveal to the public the logic behind installing traffic calming measures, from median islands to curb extensions, council officials said. Councilmember Jimmy Vacca, the bill's chief sponsor, said it would also provide a check on the administration to ensure these measures are being approved or rejected appropriately.

"It means people are going to have the power to advocate for themselves," said Vacca.

The bill would not list reasons for each individual installation, but would provide a broad definition of why one measure goes in a certain kind of traffic area. Vacca said when the legislation goes into effect, community members will know why a lane goes on one street and not another.

The bill would only apply to bike lanes used as traffic calming measures, not lanes that are installed to connect to other bike lanes.

But in this transportation climate, some questioned whether the bill could be used as a weapon against bike lane expansion.

Vacca said the bill was not "anti-bike."

Also on Tuesday, the council unanimously approved legislation (Intro 256) to require the Economic Development Corp. provide more information on the lease and sale of city-owned property.

The corporation will have to release an annual list of each lease the city has, the rent it receives from each property and the conditions of any property's sale.

Under the legislation, which was passed unanimously, the corporation will also have to create a database, which includes all job creation information for city-subsidized projects.