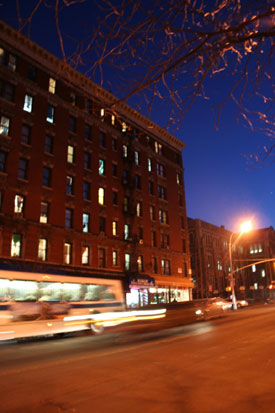 One of the buildings that made the city's list in 2009.

Taking aim at the city's worst landlords, the City Council expanded a housing program Wednesday that forces property owners to make improvements to the city's most uninhabitable buildings.

The program targets 200 dilapidated apartment buildings a year and requires landlords to address their housing code violations. If they do not fix the problems, the city does it for them and sends them the bill.

Under the expansion, the city will target larger buildings to more than double the number of units under the program. It will also include housing violations directly related to asthma, such as vermin and mold, for the first time.

"Imagine if you were sick and every time you went home it made it worse," said Council Speaker Christine Quinn. "Unfortunately, that is what's happening all over the city."

The bill, Quinn said, would fix that. Dilapidated roofs be gone and say sayonara to some heatless winters.

Despite widespread support for the program, dubbed the Safe Housing Act, it has come under scrutiny since the city failed to capture all of the funds it has invested in improvements from landlords.

Nonetheless, Wednesday's unanimous approval was hailed by tenant and housing advocates, who say the expansion will be a large step toward ridding the city of its most unsafe structures.

"The city will recoup those costs in the future," said Javier Valdes, deputy director for the advocacy group, Make the Road New York. "What's really good for the tenant is that those repairs are done now."

Advocates and residents have horror stories.

Sebastian Riccardi, a staff attorney at the Legal Aid Society, recalled one building that made the city's top 200 in Crown Heights. It had a gaping hole in the roof that was so large someone "nimble" could climb through it, Riccardi said.

To be targeted by the city, these buildings must have the highest ratio of housing violations per unit. Most of them already have tax liens, a city official said. In order to get out of the program, under the initial version of it, all improvements had to be made and all city debt paid.

The initial program, approved in 2007, inadvertently included a disproportionate number of smaller buildings. The expansion will instead target larger buildings.

As a result, the program, which will continue to target only 200 buildings, will go from about 1,000 units to nearly 3,500, said council officials.

Since the program started, a spokesperson at the Department of Housing Preservation and Development said the city has spent $17 million on improvements to these buildings. It has only received $4.5 million back from landlords.

Arguing in support of the program, officials and advocates say the city will recoup improvement costs plus the cost of any liens on the property eventually.

"It's sort of an investment," said Riccardi.

Over the course of three years, the city has seen only 192 property owners out of 600 graduate from the program. Fiscal year 2010 was the city's worst performing year to date with only 57 buildings exiting the program.

To spur landlords to actually pay back the money, the city's retooled program will include a new payment plan that will enable property owners to pay back the city in installments instead of one lump sum.

Council officials and advocates say the cost of the program will eventually even out. To save tenants' lives, Quinn said, it's well worth it.

"You can't have tenants living in that state of disrepair, while we get the money," said Quinn. "We have to make peoples' conditions livable."